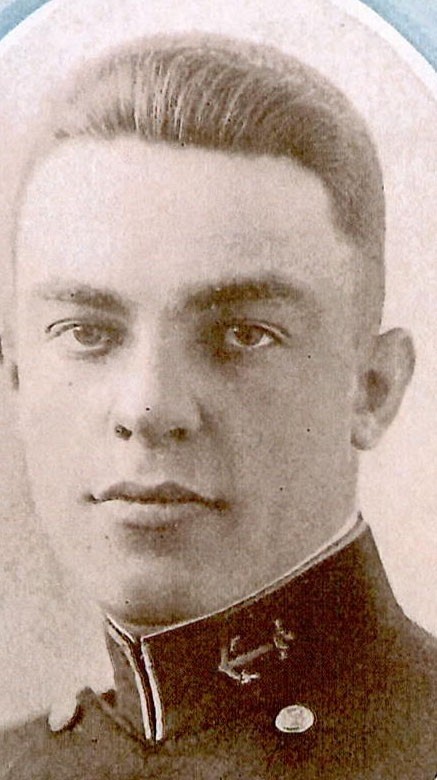 Rear Admiral Bennehoff was born on February 14, 1896, at Tiffin, Ohio, the son of the late Mr. John H. Bennehoff and Mrs. Ida Ann Bennehoff. He attended Tiffin High School, before his appointment to the US Naval Academy, Annapolis, Maryland, from his native state in 1914. Graduated and commissioned Ensign on June 28, 1917, with the class of 1918, he progressed through the various grades to the rank of Captain to date from January 1, 1942. He was retired on November 1, 1948, and promoted to the rank of Rear Admiral on the Retired List of the US Navy.

Following graduation from the Academy in 1917, Rear Admiral Bennehoff was assigned duty in USS Kansas, and in July 1918 was transferred to USS Stevens, operating with the US Destroyer Forces based on Queenstown, Ireland. He was torpedoed by a German submarine in the Irish Sea in September 1918, when returning from the war zone in HMS Missanabie. Upon his return to the United States he had a month’s instruction at the Anti-Submarine School, New London, Connecticut, and on November 1, 1918, he reported to the Ford Motor Company, Detroit Michigan, for duty in connection with fitting out USS Eagle 7. He commanded that vessel after she was commissioned on November 24, 1918, and was detached in March 1919.

Rear Admiral Bennehoff joined USS Arkansas, in Cuban waters, on March 29, 1919, and in May of that year the Arkansas sailed for Plymouth, England, for duty in connection with the trans-Atlantic flight of the NC seaplanes. From Plymouth she cruised to Brest, France, to serve as flagship of the Chief of Naval Operations on his return to the Untied States from the Peace Conference. Upon completion of this mission, the Arkansas was assigned to the Pacific Fleet. In September 1920, she cruised to Hawaii and in January 1921, she visited Chile. In August 1921, she returned from the West Coast and as flagship, Commander, Battleship Force, Atlantic Fleet, operated off the East Coast of the United States.

Rear Admiral Bennehoff was detached from duty in the Arkansas in August 1923, and was instructor in the Department of Ordnance and Gunnery at the Naval Academy until July 1925. In December 1925 he completed instruction in submarines on board USS Chewink and served in USS S-13 and commanded USS S-11 until June 1929. He had instruction in General Line Duties at Postgraduate School, Annapolis, Maryland in 1929-1930, and attended the course at the Naval War College, Newport, Rhode Island, 1930-1931. Following instruction he had command of USS S-48, based on the Panama Canal Zone, from June 1931 until June 1934. In February and March 1932 he commanded the West Indies Gravity Survey Expedition.

From June 1934 until June 1936, Rear Admiral Bennehoff served in the Bureau of Ordnance, Navy Department, Washington, DC, after which he assumed the duties of operations, war plans and gunnery officer on the staff of Commander Submarine Force. He had a two year tour of duty as instructor and later Head of the Seamanship Division, Executive Officer and Acting Head of the Department of Seamanship and Navigation, at the Naval Academy. Upon detachment from the Academy in July 1941, he assumed command of Destroyer Division SIXTY-SEVEN, USS Borie, flagship. In July 1942, he reported to the Newport News Shipbuilding and Drydock Company, Newport News, Virginia, for duty in connection with converting USS Thomas Stone, of which he assumed command upon completion of the conversion. For services in the Thomas Stone, he was awarded the Legion of Merit with the following citation:

“For exceptionally meritorious conduct in the performance of outstanding service to the Government of the Untied States as Commanding Officer of USS Thomas Stone, attached to Transport Division ELEVEN, in action against the enemy dring out amphibious assault against Algiers, Algeria, November 7-8, 1942. Exercising sound judgment and outstanding perseverance when his ship was torpedoed and forced to drop out of the convoy early on the morning of November 7, Captain Bennehoff immediately directed the transfer of 700 embarked troops needed for the invasion to the ship’s landing boats and, dispatching the landing craft to shore under escort of a British Corvette which had been the only protection for his crippled vessel, gallantly held the Thomas Stone 160 miles, offshore, alone and at the mercy of a vigilant and ruthless enemy. When a British destroyer subsequently arrived to render assistance, Captain Bennehoff displayed brilliant seamanship and cool courage in the safe return of his stricken craft to the Port of Algiers where her vital cargo was unloaded. His daring initiative and zealous devotion to duty throughout contributed essentially to the success of the invasion.”

He was also awarded the Distinguished Service Order by Great Britain and cited as follows:

“When his ship was disabled over 120 miles from the assault position, Captain Bennehoff set a splendid example in courage and determination in sending his troops and landing craft off to their destination escorted by the only vessel in company who could provide him with A/S protection. When his ship was subsequently towed to harbour Captain Bennehoff displayed fine qualities of seamanship and gave the greatest possible assistance to the towing vessels.”

Detached from the Thomas Stone in June 1943, Rear Admiral Bennehoff reported to the Chief of Naval Operations, Navy Department, Washington, DC, for duty in the Plans Division, serving there until May 1947. For service as Senior Member of the Joint Logistics Plans Committee of the Joint Chiefs of Staff from August 23, 1943 until March 18, 1946, he was awarded a Letter of Commendation with authorization to wear the Commendation Ribbon.

Following duty in the Department, Rear Admiral Bennehoff reported in July 1947, as President of the General Court Martial Board, Eleventh Naval District, San Diego, California. He served in that assignment until relieved of all active duty pending retirement on November 1, 1948. He died at Arundel on the Bay, Anne Arundel County, Maryland, on July 17, 1950, and was buried at Arlington National Cemetery, Arlington, Virginia.