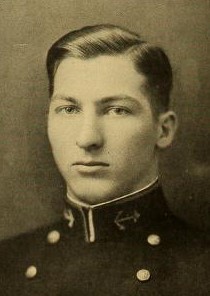 John Golden Foster was born in Lexington, Mississippi, March 28, 1904. He attended high school in Gainesville, Florida, and the Marion Military Institute, Marion Alabama, before entering the US Naval Academy in 1922. Graduating in 1926, he was commissioned Ensign, and by subsequent promotions attained the rank of Captain.

From his graduation in 1926, he served in the battleship New Mexico, and in July, 1927 transferred to the USS Mullany. In April, 1928 he was ordered to the Naval Air Station, Pensacola, Florida, for flight training, and after one year was designated Naval Aviator. He was assigned to Aircraft Squadron, US Fleet, for duty with Fighting Squadron 5 aboard the USS Lexington, where he was later given duty as Assistant Landing Signal Officer.

After duty with Patrol Squadron Six at Pearl Harbor; Observation Squadron One based on the USS Texas; and Bombing Squadron Two on the Carrier Saratoga, he was ordered to the naval Air Station, Norfolk, Virginia, for duty as Planning Officer of the Assembly and Repair Shops. From June, 1938 to May 1939 he served as Senior Aviator of Cruiser Scouting Squadron Three based on the USS Concord. He then assumed command of the seaplane tender Lapwing, operating in the Caribbean Sea. Ordered detached from command of the Lapwing, he reported in the Naval Air Station, Coco Solo, Canal Zone, and served from July, 1940 until October, 1941 as Superintendent of the Assembly and Repair Shops.

He reported aboard the USS Hornet in November, 1941 for duty as Air Operations and Assistant Air Officer. During the period of his service in that carrier, he participated in the first air raid on Tokyo, the “Doolittle” raid, and the Battle of Midway. Detached in July, 1942, he assisted with fitting out the USS Nassau, and upon her commissioning in August, he served aboard as Air Officer, and after January, 1943 as Executive Officer of that escort carrier. After a brief shakedown out of Puget Sound Navy Yard, she joined the South Pacific Force at Espiritu Santo, participated in operations for the capture of Guadalcanal, and later in support of the landings on Attu in the Aleutian Islands. Returning from this mission to the West Coast, the Nassau was converted to an aircraft transport, and served in that category from June, 1943.

In October, 1943 he was designated for duty in the Office of the Chief of Naval Operations, Navy Department, Washington, DC, where he served until the end of 1944. In February, 1945 he assumed command of the escort carrier Rudyerd Bay in the Asiatic area, serving Merit, with combat distinguishing device, V, “For exceptionally meritorious conduct in the performance of outstanding service… during operations against enemy Japanese forces at Iwo Jima and Okinawa from February 10 to May 23, 1945.” The citation also stated that Captain Foster, during intensified and hazardous operations, “Aided greatly in providing effective support to our amphibious forces and our troops ashore, thereby contributing materially to the successful completion of these campaigns…”

From April 1946 to July 1947 he served as Commanding Officer of the Naval Air Station, Columbus, Ohio. He next attended the Naval War College, Newport, Rhode Island, and upon completing the instruction in May 1948, he was ordered to the Navy Department for duty in the office of the Chief of Naval Operations. When detached after two years, he became Commander Fleet Air Wing 14. In September 1951 he returned to the Navy Department where he was assigned as Assistant Director of Plans and Policy Control Division, Bureau of Naval Personnel. He was Chief of Staff and Aide to the Chief of Naval Air Technical Training, Naval Air Station, Memphis, Tennessee, from July 1952 until June 1953, when he became Commanding Officer of the Naval Air Station there. In March 1954 he was ordered to duty as Professor of Naval Science, Naval Reserve Officer Training Corps Unit at the University of Washington, Seattle.