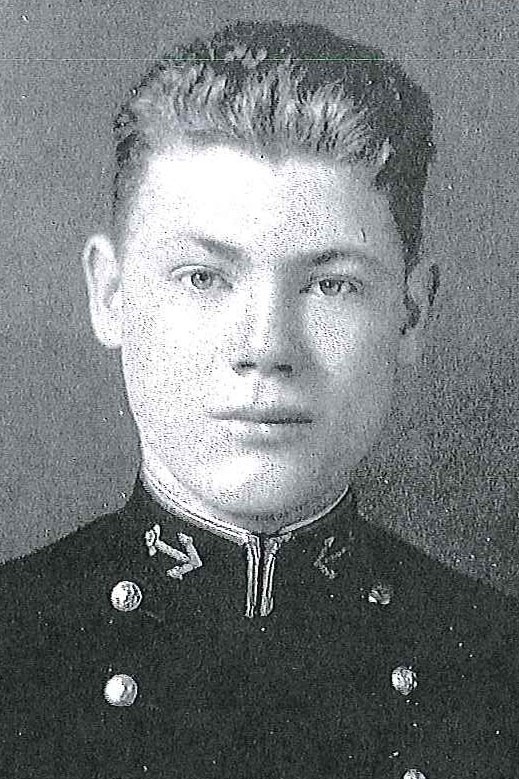 Lieutenant Commander Dickson was born in Columbus, Ohio, on September 16, 1914. He attended Western High School, Washington, DC, prior to his appointment to the US Naval Academy at Annapolis, Maryland, from the Fourth District of Ohio, in 1932. He was graduated and commissioned Ensign on June 4, 1936, and was ordered on June 28, 1936, to USS Quincy and served in her until January 28, 1939.

He was appointed a Lieutenant Commander on May 1, 1943, and in July of that year was assigned to Bombing Squadron NINETY-NINE. Thereafter he served consecutively with Bombing Squadrons TWENTY and EIGHTEEN until November 1943, at which time he assumed command of the latter.

“For extraordinary heroism and courageous perseverance as pilot of an airplane of a Bombing Squadron in dive bombing attacks enemy Japanese forces in Tulagi Harbor on May 4, and in an attack on an enemy aircraft carrier in the Coral Sea on May 8, 1942. Pressing home these attacks in the face of tremendous antiaircraft fire, and on May 8, also harassed by heavy aircraft opposition, Lieutenant Dickson assisted greatly in the sinking or damaging of the carrier and other enemy vessels. His conscientious devotion to duty and gallant self command against formidable odds contributed materially to the success of our forces in the Battle of the Coral Sea.”

Gold Star in lieu of a Second Navy Cross:

“For extraordinary heroism and distinguished service as pilot of an airplane of a Scouting Squadron in action against enemy Japanese forces in the Battle of Midway during the period June 4-6, 1942. Defying extreme danger from concentrated antiaircraft fire and fierce fighter opposition, Lieutenant Dickson, with utter disregard for his own personal safety, participated in persistent and vigorous attacks against the Japanese invasion fleet. His gallant intrepidity and loyal devotion to the accomplishment of a vastly important objective contributed in large measure to the success achieved by our forces and were in keeping with the highest traditions of the United States Naval Service.”

Lieutenant Commander Dickson was killed when the Navy dive bomber of which he was pilot crashed north of San Luis Obispo, California, on February 5, 1944.

In addition to the Navy Cross and the Gold Star, Lieutenant Commander Dickson is entitled to the American Defense Service Medal, Fleet Clasp: the Asiatic-Pacific Campaign Medal; and the World War II Victory Medal.

A destroyer, the USS Harlan R. Dickson, has been named in his honor.