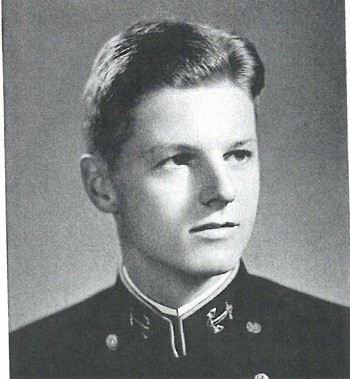 Lando William Zech, Jr. was born in Astoria, Oregon, on 29 June 1923, son of Lando W. and Mae (Monroe) Zech. He attended Roosevelt High School and Lakeside School, both in Seattle, Washington, prior to entering the US Naval Academy, Annapolis, Maryland, on appointment from the State of Washington in 1941.  Graduated with the Class of 1945 on 7 June 1944 (accelerated course due to World War II), he was commissioned Ensign and subsequently advanced in rank to that of Rear Admiral, to date from 1 August 1973.

Following graduation from the Naval Academy in 1944, he joined USS John D. Henley (DD-553) and participated in the Caroline Islands operation, Second Battle of the Philippines, assault and occupation of Iwo Jima and the Okinawa operation. In March 1946 he transferred to USS Henry W. Tucker (DDR-875) and in November 1947 was detached for submarine training at the Submarine School, New London, Connecticut. He reported in June 1948 on board USS Flying Fish (SS-224) and from January 1951 to June 1952 continued duty afloat in USS Blackfin (SS-322). He was attached to that submarine during her first patrol in the Korean area, 30 March to 5 May 1952.

Returning to the Naval Academy in June 1952, he served in the Executive Department until June 1954, then was assigned as Executive Officer and Navigator of USS Irex (SS-482). He assumed command of USS Sea Robin (SS-407) in January 1956 and in January 1957 became Commanding Officer of USS Albacore (AGSS-569). He was a student at the Armed Forces Staff College, Norfolk, Virginia, from February to July 1958, after which he had instruction in the Division of Naval Reactors, Atomic Energy Commission, Washington, DC.

He reported in June 1959 as Commanding Officer of USS Nautilus (SSN-571), the first nuclear powered ship. He accomplished her first overhaul and subsequently steamed her more than 60,000 miles.  He was awarded the Navy Commendation Medal “for meritorious achievement during a period in 1961…Commander Zech succeeded in carrying out a difficult mission of great importance to the United States Navy…” He attended the Polaris Command Course, Dam Neck, Virginia, from May to July 1962, then had further training at the Fleet Sonar School, Key West, Florida. During September and October 1962 he had instruction at the Naval Reactors Operations Office, Atomic Energy Commission, Pittsburgh, Pennsylvania, after which he commanded USS John Adams (SSBN-620).

From May 1965 to July 1967 he headed the Submarine Assignment Section, Bureau of Naval Personnel, Navy Department, Washington, DC, then had instruction at the National War College, Washington, DC. He assumed command of USS Springfield (CLG-7), flagship of Commander SECOND Fleet, on 12 July 1968 and in February 1970 reported as Deputy Chief of Legislative Affairs, Navy Department. “For exceptionally meritorious conduct…” in that capacity, he was awarded the Legion of Merit. The citation further states: “… (He) was responsible for and directly supervised the operations of the Office of Legislative Affairs for two successive Chiefs of Legislative Affairs during a particularly eventful period for the Navy period for the Navy in its relations with the Congress of the United States. Required to assume an ever-increasing work load while absorbing significant reductions in staff, he succeeded in initiating actions which resulted in undiminished production, increased efficiency and superior quality of work while maintaining and sustaining the high morale of a loyal and dedicated group of civilian and military personnel …”

In June 1972 he reported as Deputy Commander of the Navy Recruiting Command Headquarters, Washington, DC and in May 1974 was ordered detached for duty as Commandant of the Thirteenth Naval District, headquartered in Seattle, Washington.

He was married to the former Josephine M. Kerr of Bristol, and they had five daughters. Rear Admiral Zech passed away 9 January 2011 and was interred at Arlington National Cemetery.