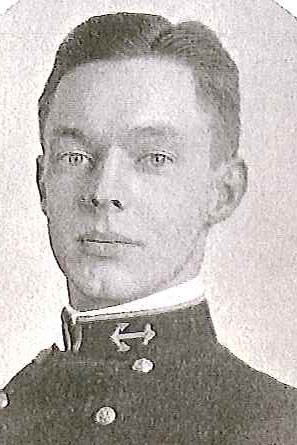 Walter Atlee Edwards was born in Philadelphia, Pennsylvania, on November 8, 1886. He was appointed Midshipman from the Second District of Pennsylvania, and entered the US Navy Academy, Annapolis, Maryland, on March 17, 1906. Completing the four-year course, after summer cruises on board USS Olympia, USS Hartford and USS Chicago, he was graduated on June3, 1910. He began the two years at sea then required by law, and was commissioned Ensign in the US Navy on March 7, 1912, when that law was changed. By subsequent advancement, he attained the rank of Lieutenant Commander, his date for rank June 3, 1921, having served in that rank (temporary) during the latter period of World War I.

After graduation from the Naval Academy, he was assigned to USS Michigan from July 5 ,1910 until May 31, 1912. He then had successive service on board USS Chester, USS Des Moines, USS Monaghan and USS Walke, and was detached from the latter vessel for instruction in aeronautics at the Aeronautic Station (later Naval Air Station), Pensacola, Florida, on July 15, 1914. Designated “as actual flier of heavier than aircraft” to date from October 3, 1914, he reported to the works of the New York Shipbuilding Company, Camden, New Jersey, for duty in connection with fitting out USS Ericsson. In June 1915 was ordered to return to the Naval Aeronautic Station for further training as a Student Naval Aviator, where he remained until October 10, 1916.

Reporting next to USS Jarvis, he served for a month, and on November 19, 1916, joined USS Cushing. He was serving in the Cushing when the United States entered World War I, April 6, 1917. Detached on October 27, he reported to USS Melville, for duty as Air for Aviation on the Staff of Commander, US Naval Forces Operating in European Waters. He was awarded the Navy Cross and cited: “For distinguished service in the line of his profession on the staff of Commander, US Naval Forces in European Waters.”

Continuing staff duty after the flag was changed from Melville to USS Corsair in January 1919, he was detached on March 28, and in April reported to the Navy Department, Washington, D. C., for brief duty in the Bureau of Navigation. He then reported to the Naval War College, Newport, Rhode Island, where he served as Aide to the Commandant until April 20, 1921. On May 11, that year, he assumed command of USS Dahlgren, and on December 2 was transferred to command of USS Paul Jones. From June 1, 1922, until September 7, 1923, he commanded USS Bainbridge, and for heroism while serving in that command was awarded the Medal of Honor, which was presented to him by President Calvin Coolidge at the White House on February 2, 1924. The citation follows:

Medal of Honor: “For heroism in rescuing 482 men, women and children from the French military transport Vinh-Long, destroyed by fire in the Sea of Marmora, Turkey, on December 16, 1922. Lieutenant Commander Edwards, commanding USS Bainbridge, placed his vessel alongside the bow of the transport and, in spite of several violent explosions which occurred on the burning vessel, maintained his ship in that position until all who were alive were taken on board. Of a total of 495 on board, 482 were rescued by his coolness, judgement, and professional skill, which were combined with a degree of heroism that must reflect new glory on the United States Navy."

Lieutenant Commander Edwards was also awarded the Legion of Honor with rank of Officier, by the Government of France, and the Distinguished Service Order by his Majesty, the King of England, for his heroic conduct on that occasion.

On September 8, 1923, he reported as Aide to the Chief of the Bureau of Navigation, Navy Department (Rear Admiral Andrew T. Long, USN), and after serving in that capacity until February 15, 1924, he had other duty in the Bureau until September 15, 1925. He had duty next as Gunnery Officer of USS Pittsburgh, until August 1927, when he assumed command of USS Billingsley. He was hospitalized in December of that year, while in Washington, DC, awaiting orders, and died at Garfield Hospital on January 15, 1928.

In addition to the Medal of Honor, the Navy Cross and two foreign decorations, he had the Yangtze and Mexican Service Medals and Victory Medal (WW-1).