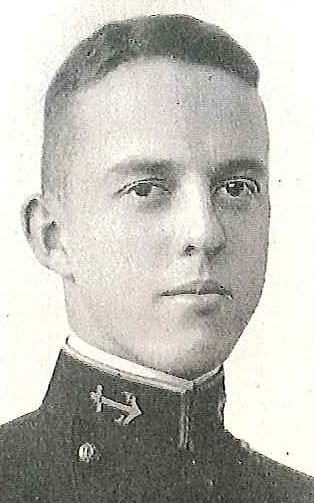 Floyd Franklin Ferris was born in Easternhampton, Long Island, New York, on June 22, 1898. He graduated from Horace Mann School in New York City, before entering the US Naval Academy from New York on August 18, 1917. During World War I he had active service as a Midshipman aboard USS Maine, operating with the Atlantic Squadron. He was graduated and commissioned Ensign on June 3, 1921, and subsequently attained the rank of Captain, to date from June 21, 1942. He was transferred to the Retired List of the Navy on June 30, 1952, and advanced to the rank of Rear Admiral on the basis of combat awards, but was retained on active duty in the rank of Captain.

Following graduation from the Naval Academy, he was at sea for seven years, serving successively aboard USS Oklahoma, of Battleship Division 6, Pacific Fleet; USS Charles Ausburne, USS Antares, and USS Reid, destroyers of the Atlantic Fleet; USS Pittsburgh, Flagship of Commander Naval Forces, Europe; and USS Hopkins, Flagship and squadron leader of Destroyer Squadron 14, Scouting Fleet. In 1928 he was assigned duty as Officer in Charge of the Navy Recruiting Station, Indianapolis, Indiana, where he served until August 1930.

He next joined USS Chester, and served in that heavy cruiser, operating with Cruiser Division Four, Scouting Fleet, for almost three years. From June 1933 to March 1935 he had duty at Headquarters, Fourth Naval District, Philadelphia, Pennsylvania, and during the two years following he was Aide and Flag Lieutenant to Commander Cruiser Division 7, Scouting Force; and Aide and Flag Secretary to Commander Squadron 40-T serving in European waters. He commanded USS Kane, which duty involved evacuating US citizens from Spain during their civil war. Later the Kane operated with Destroyers, Battle Force, from September 1937 until April 1938.

Following instruction at Edgewood Arsenal, Edgewood, Maryland, he served as an assistant professor of Naval Science and Tactics in the Naval Reserve Officers Training Corps Unit of Yale University, New Haven Connecticut. He was detached on June 4, 1940 for duty as Damage Control Officer and First Lieutenant of the battleship Idaho, which ship was shortly assigned to escort and patrol duty in the North Atlantic area and based on Iceland prior to the Japanese attack on Pearl Harbor.

From August 1942 to July 1944 he served successively as Executive Officer of USS President Adams, and in command of USS Libra. He was awarded the Legion of Merit with Combat “V,” for “exceptionally meritorious service in the Solomon Islands Area from August 7, 1942 to July 30, 1943…” The citation states that “after participating in the initial occupation of Guadalcanal-Tulagi on August 7, (he) subsequently made many trips into the forward area to deliver reinforcements… (and) helped to repair enemy aircraft which viciously his vessel…”

He was awarded the Bronze Star Medal with Combat “V,” for “meritorious achievement as Commanding Officer of a United States Transport while engaged in the landing of assault troop on an enemy Japanese held islands in the Pacific Area… (at which time) he contributed essentially to the success of the naval phase of the attack…” He also received a Letter of Commendation, with Ribbon and Combat “V,” from the Commander in Chief, Pacific Fleet, which follows in part:

“ For meritorious and efficient performance of duty as Commanding Officer of an attack cargo vessel carrying reinforcements to the American-held position on Bougainville Island, on November 8, 1943….Captain Ferris, by skillfully maneuvering his ship under extremely difficult navigational conditions, assisted in repelling the attack and in destroying several enemy aircraft… contributing materially to the successful completion of his vital mission…”

Upon his return to the United States in August 1944, he reported to the Office of the Chief of Naval Operations, Navy Department, and was assigned duty as Navy Foreign Liaison Officer, Office of Naval Intelligence. This assignment continues.

In addition to the Legion of Merit, the Bronze Star Medal, and the Commendation Ribbon, each with Combat “V,” and two awards of the Navy Unit Commendation, Rear Admiral Ferris has the Victory Medal, Atlantic Fleet Clasp, for World War I service; the American Defense Service Medal with Bronze “A”; the American Campaign Medal; European-African-Middle-Eastern Campaign Medal; the Asiatic-Pacific Campaign Medal with seven engagements stars; World War II Victory Medal; and the National Defense Service Medal. He also has been awarded the following foreign decorations: The Order of the Britain Empire from Great Britain; the Order of Military Merit from free Czechoslovakia: Royal Order of George I from Greece; the Special Breast Order of Yun Hui from Nationalist China; the Swedish Royal Order of the Sword; the Order of Orange-Nassau from the Netherlands; the Order of Dannebrog from Denmark; the Legion d’Honneur from France; and the Naval Cross of Merit from Spain.

Rear Admiral Ferris is a member of the Army-Navy Club, Washington, DC; the New York Yacht Club; Pentalpha Lodge # 564, AF&AM Indianapolis, Indiana; the United States Naval Academy Alumni Association; the Huguenot Society; the Massachusetts Society of Mayflower Descendants; the Connecticut Society of the Sons of the American Revolution; the New York Society of Colonial Wars; and the Baronial Order of Magna Charta.