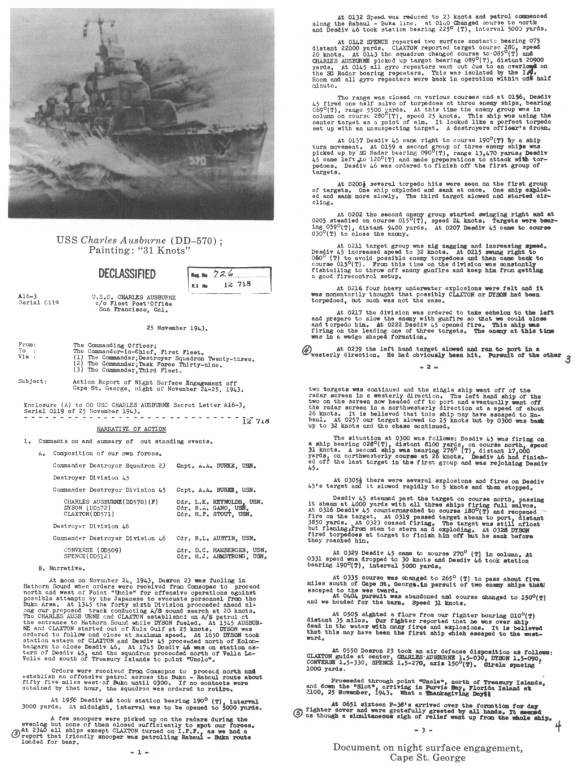 Charles Lawrence Ausburne was born in New Orleans, La., 26 July 1889, and enlisted in the Navy 25 February 1908. As an Electrician First Class, Ausburne manned the emergency wireless station in the Army transport Antilles, and following the ship's fatal torpedoing 17 October 1917, stood to his duty until the ship sank beneath him. His gallantry was recognized in the posthumous award of the Navy Cross.

Since other family members spelled their name as Ausburn, the first ship to bear his name followed that spelling. It was later found that he himself signed as Ausburne, and the second ship's name was so spelled.

Charles Ausburne's first mission which took place between 1 April and 8 May 1943 was to escort a convoy to Casablanca from New York, returning with another. At Boston on 11 May, she joined Destroyer Squadron 23 upon its activation, and was assigned as flagship for Destroyer Division 45. Sailing to the Pacific she arrived at Noumea, New Caledonia, 28 June to begin a summer of patrol and escort duties supporting the conquest of Guadalcanal, guarding convoys to that island, and between such ports as Efate and Espiritu Santo. From 27 August, she was based at Port Purvis, where she was part of a striking force designed to interrupt the passage of the "Tokyo Express," the nightly runs of Japanese destroyers evacuating troops from the Solomons to Bougainville and New Britain. Her first patrol "up the Slot" on the night of 27-28 August, was uneventful, and her first contact with the enemy came on 7 September, when her group came under enemy air attack. During this time, she guarded the movement of transports and LSTs redeploying men in the Solomons, and took part in experiments with night fighters.

It was on the night of 27-28 September 1943 that the enemy first felt Charles Ausburne's accurate fire, when she sank two barges in the waters off Vella LaVella. Early in October, she returned to Espiritu Santo for replenishment and training, and here on 23 October the squadron's most famous Commander, Captain Arleigh A. Burke, broke his pennant in Charles Ausburne. Under his command, the "Little Beavers," as he nicknamed the squadron, were to win an immortal place in naval history, recognized by the awarding of the Presidential Unit Citation. Their continual series of operations against Japanese naval forces and shore installations played a large part in the winning of the Solomon Islands, and Charles Ausburne was in the thickest action from 31 October 1943 to 23 February 1944.

Her support of the invasion of Bouganville began on the night of 31 October 1943, when her task force sortied from Port Purvis to neutralize the Japanese airfields at Buka with heavy gunfire. Charles Ausburne fired on shore batteries here and on the Shortlands, which the task force passed on its way south to refuel. In the early morning of 1 November, troops stormed ashore at Empress Augusta Bay, and word was received of the movement of four Japanese cruisers and six destroyers south from Rabaul to attack the transports off Bougainville. Immediately, Charles Ausburne and her force put north to meet and engage the enemy. First contact was made at 0227, 2 November, when the targets were clear on the flagship's radar, and Charles Ausburne and three other "Little Beavers" maneuvered for a torpedo attack, which the Japanese evaded. Next, they sent the cruiser Sendai, already blazing from the attack of American cruisers, to the bottom, then sped at 32 knots to close the destroyer Hatsukaze. With Spence (DD-512) joining in the attack, Charles Ausburne sank the Japanese destroyer, then dashed to the assistance of torpedo-damaged Foote (DD-511) whom she escorted to Purvis Bay at the close of this Battle of Empress Augusta Bay.

Through the remainder of November, Charles Ausburne patrolled and conducted bombardments in the Bougainville area, several times escorting resupply echelons to that island. Devastating fire poured on to the Japanese airfield at Bonis, and antiaircraft actions were fought off the beachheads, as the squadron was almost constantly underway. On 24 November 1943, while the squadron refueled in Harborn Sound, orders came to intercept Japanese forces believed to be moving down to evacuate men from Buka. Immediately, the five American destroyers then composing the squadron moved north to search the Rabaul-Buka line, and at 0141 on 25 November, a radar surface contact was made as the squadron patrolled in St. George Channel. Charles Ausburne with two others headed in for a torpedo attack on two Japanese destroyers as Burke's two remaining destroyers provided cover. Hits disintegrated Onami, and broke Makinami in two. Quickly as the covering ships polished Makinami off, Charles Ausburne and the others turned to attack three destroyer transports now visible, who turned and fled with the American destroyers in pursuit. At 0215, acting on sound estimate, Captain Burke ordered his ships to make a sharp change of course to the right to evade torpedos. Just a minute later came the slam of torpedoes exploding in the wake of his ships. Now the "Little Beavers" opened fire on the fleeing enemy, while maneuvering to avoid return fire. As the three targets took divergent courses, Charles Ausburne continued her pursuit of Yugiri hitting her repeatedly. Soon blazing from stem to stern, the Japanese ship made a last desperate attempt to open the range but was quickly overhauled and sunk. Approaching daylight now made it imperative that the squadron withdraw to put distance between themselves and the Japanese airbase at Rabaul. Thus ended the classic destroyer battle off Cape St. George, marked by outstanding devotion to duty, skill, and aggressiveness in the American squadron. Three enemy ships had been sunk and another badly damaged, while no damage was received by the American ships.

Through December 1943, Charles Ausburne continued her patrol, escort, antiaircraft, and bombardment duties in support of the Bougainville operation. After brief overhaul in Australia she returned to the northern Solomons 30 January 1944, and on 3 February sailed for action once more, fighting off a heavy Japanese air attack to break through for a bombardment mission on the northern coast of Bougainville. A series of patrols to cover the landings on Green Island and many searches for enemy surface craft were conducted, along with a punishing bombardment of Kavieng Harbor on 18 February. The enemy's port facilities, airstrip, and supply dump were almost completely destroyed in this attack.

From 20 to 24 February 1944, the squadron swept the waters of New Ireland for Japanese shipping, sinking a tug, a coastal minelayer, a small freighter, and many barges, then returned to escorting amphibious craft until 5 March, when they sailed on a patrol north of the Bismarcks.

On 26 March 1944, Charles Ausburne joined the 5th Fleet at sea, and next day Captain Burke left the ship to assume new responsibilities as Chief of Staff. With the powerful carrier striking force TF 58, Charles Ausburne sailed for air strikes in the Palaus and on Yap, Ulithi, and Woleai between 30 March and 1 April, then replenished at Majuro. Later in the month she sailed with the group formed around Yorktown, screening as the carrier offered direct air support during the landings at Holandia, and launched strikes against Truk and Ponape. Returning to Majuro, Charles Ausburne joined in exercises preparing for the next great operation, the assault upon the Marianas.

On this mission, Charles Ausburne was at sea from 6 June to 6 July 1944, primarily steaming in the screen guarding the carriers of TF 58 as they repeatedly struck Tinian, Saipan, Pagan, Guam, and Iwo Jima. This neutralization of enemy airfields and island defenses made feasible the series of landings in the Marianas. Charles Ausburne also bombarded shore defenses on Guam, and screened carrier Essex while the carrier hurled strikes at Saipan to support the initial landings on Guam and the advancing troops on Saipan.

After overhaul on the west coast, Charles Ausburne returned to Ulithi 5 November 1944, and through the remainder of November guarded carriers providing air cover for convoys to Leyte. Heavy air action came in December, when from the 19th to the 24th, the destroyer led the first resupply convoy from San Pedro Bay to Mindoro. On the 21st, four separate raids, one of which included kamikazes, met the fire of the screening destroyers, and more raids were fought off as the convoy unloaded.

Continuing her support of the return to the Philippines, Charles Ausburne screened transports from San Pedro Bay, sailing 4 January 1945, north for Lingayen Gulf. On 7 January, the escort fought off an enemy air attack, and later, Charles Ausburne, with three other destroyers, sped off to investigate a radar contact. It was the Japanese destroyer Hinoki, quickly dispatched to the bottom by the effective fire of the four American ships. On 9 and 10 January, she shielded the assault landings then hurled 5-inch shells ashore to aid advancing troops. Returning to San Pedro 15 January, Charles Ausburne began 2 months of convoy escort and patrol duty to Lingayen, and around San Pedro Bay.

Through late March and April 1945, the destroyer screened landings at Panay and Negros, and provided night illumination and call-fire support at both Negroes and Parang on Mindanao. On 13 May, she sailed from San Pedro Bay to rejoin the 5th Fleet and on 16 May reached Okinawa's Hagushi anchorage. After a period of antisubmarine patrol, during which she twice drove off enemy air attack, she protected landings at Aguni Shima, and on 23 June, received her first assignment to the inferno of radar picket duty, which she survived without damage. She remained on patrol off Okinawa through the remainder of the war.

Charles Ausburne left Okinawa 10 September 1945, and arrived at Washington, D.C., 17 October to receive her Presidential Unit Citation. After a visit to New York, she reached Charleston, S.C., where she was placed out of commission in reserve 18 April 1946. Here on 12 April 1960 she was transferred to the Federal Republic of Germany, with whom she serves as Z-6.