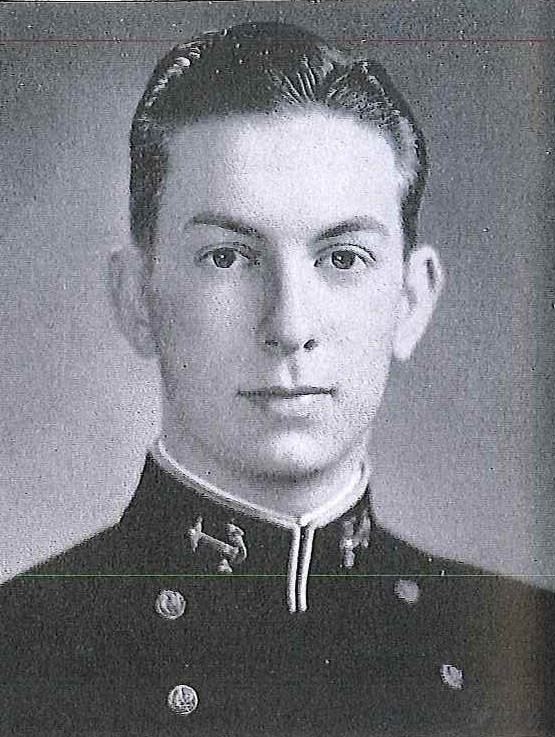 George Fitzallen Ellis, Jr., was born in Salisbury, North Carolina, on May 4, 1923, son of the late George F, and Lena (Ramsay) Ellis (now Mrs. Martin). He attended Boyden High School, Salisbury, North Carolina (1936-1940) and Georgia Military Academy at College Park for a year, prior to entering the US Naval Academy, Annapolis, Maryland on appointment from his native state in 1941. He was graduated and commissioned Ensign with the Class of 1945 on June 7, 1944 (accelerated course due to World War II) and subsequently advanced in rank to that of Rear Admiral, to date from August 1, 1972.

Following graduation from the Naval Academy in 1944, he attended the Naval Submarine School, New London, Connecticut, and in January 1945 joined the pre-commissioning crew of USS Mapiro (SS-376), building at the Manitowoc (Wisconsin) Shipbuilding Company. He served as Gunnery Officer and First Lieutenant of that submarine from her commissioning on April 30, 1945 until her decommissioning on March 16, 1946. In April 1946 he joined USS Sterlet (SS-392) for duty as Communications Officer and later Gunnery Officer. During the period October 1948 to July 1950 he had successive service as Electronics Officer, Gunnery Officer and Engineer Officer on board USS Sea Fox (SS-402) then returned to the Naval Submarine School, New London, Connecticut, where he was an Instructor in the Electrical Department.

In November 1952 he was assigned to USS Icefish (SS-367) and served as her Executive Officer and Navigator from her re-commissioning on December 10, 1952 at Groton, Connecticut. She remained in the area conducting various tests until February 21, 1953, when she was decommissioned and turned over to the Netherlands Navy. Ordered to USS Hardhead, undergoing conversion at New London, Connecticut, he joined her as Executive Officer upon her recommissioning on March 24, 1953. Detached in November 1954 he then assumed command of USS Bang (SS-385). Following instruction, January to June 1957, at the Armed Forces Staff College, Norfolk, Virginia, he attended Rensselaer Polytechnic Institute at Troy, New York, from which he received a Master of Science degree in Management Engineering in June 1958.

Assigned to the Bureau of Ordnance, Navy Department, Washington, DC, he was Head of the Engineering Section in the Underwater Ordnance Branch, Material Division until September 1959, then transferred to the Officer of the Chief of Naval Operations, Navy Department, where he was Development Assistant to the Head of the Ballistic Missile Branch. During the period September 1960 to July 1962 he was Ordnance Officer on the Staff of Commander Submarine Force, US Atlantic Fleet, wherehis principal duties include engineering and logistic support for all submarine torpedoes, fire control equipment, POLARIS missile and associated systems. He next command Submarine Division FORTY-ONE until March 1963, when he joined the Staff of the Supreme Allied Commander, Europe as the POLARIS staff planning officer, Nuclear Plans Section. In that capacity he was awarded the Joint Service Commendation Medal “For exceptionally meritorious achievement. . .” The citation states in part: “. . .Captain Ellis distinguished himself by making major contributions to the introduction of the POLARIS weapons system into Allied Command Europe. . .”

In June 1966 he assumed command of the USS Simon Lake (AS-33), a POLARIS submarine tender based in Holy Loch, Scotland. “For exceptionally meritorious conduct. . .June 15, 1966 to July 13, 1968. . .” in that capacity he was awarded the Legion of Merit. The citation continues in part: “. . .Captain Ellis successfully accomplished the expeditious refit of POLARIS submarines, thus enabling them to meet their operational commitments. . .”

Assigned to the National Military Command System Support Center, Defense Communications Agency, Arlington, Virginia, he served as Assistant Chief, Directorate for Development and Analysis and in that capacity was awarded the Meritorious Service Medal “for outstanding meritorious service. . . from August 1968 to January 1970. . .” The next month he assumed command of Submarine Flotilla SEVEN. He was awarded a Gold Star in lieu of the Second Legion of Merit for “. . .exceptional leadership and profound competence in a position of great responsibility, directing American submarines in the Western Pacific. . .” He is also entitled to the Ribbon for and facsimile of the Navy Unit Commendation award Submarine Flotilla SEVEN.

In July 1971 he reported as Special Assistant to the Director of Navy Program Planning, Office of the Chief of Naval Operations, Navy Department and in June 1972 became Deputy Defense Advisor for US NATO/Defense, headquartered in Brussels, Belgium. He was ordered detached in May 1973 for duty as Deputy Assistant Chief of Staff for Plans and Policy to the Supreme Allied Commander, Europe.