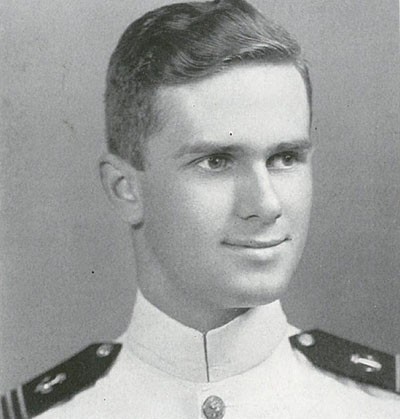 Lloyd Roland Vasey was born in Vallejo, California, on 31 January 1917, son of Commander R. C. Vasey, USN, and Mrs. (Mabel Anderson) Vasey, both now deceased. He graduated from Belmont High School, Los Angeles, California. While serving as an Apprentice Seaman in the US Naval Reserves in Los Angeles, he won a competitive appointment to the US Naval Academy, Annapolis. Graduated with the degree of Bachelor of Science, and commissioned Ensign in the US Navy on 1 June 1939, he subsequently advanced in rank to that of Rear Admiral, to date from 1 December 1965.

After graduation from the Naval Academy in June 1939, he was assigned to the battleship Mississippi, in which he had various duties as a junior officer, including that of Assistant Navigator, until September 1940. He then had duty for three months as First Lieutenant and Damage Control Officer on board USS Perkins, a destroyer of the Battle Force, after which, from January to March 1941, he was a student at the Submarine School, US Naval Submarine Base, New London, Connecticut. In March 1941 he reported for duty on board the USS R-20, based at New London, and after the outbreak of World War II in December of that year, served until May 1943 in that submarine, as Chief Engineer, First Lieutenant and Communications Officer.

During the period May 1942 until July 1944 he was on board USS Gunnel, and served first as the First Lieutenant and Torpedo Officer and later as Executive Officer and Navigator while that submarine conducted several war patrols; initially off the coast of Northwest Africa and Spain, and later in the Western Pacific where his submarine torpedoed a number of enemy ships while cruising near Japan home islands. He was awarded the Bronze Star Medal with Combat “V”.

He returned to the United States and in October 1944 reported to the Submarine Prospective Commanding Officers’ School. He was detached in December of that year for duty on USS Angler, and served as Executive Officer and Navigator during a successful war patrol in the South China and Java Seas. From June to November 1945 he was attached to Submarine Squadron FIVE as a Prospective Commanding Officer during the refit of submarines, and shortly after the Japanese surrender, he and his crew participated in the initial allied landing at Yokosuka, Japan, and had the task of inspecting and de-arming several enemy midget submarines. In December 1945 he reported to the Navy Department, Washington, DC, for a tour of duty as Director of Enlisted Records Division in the Bureau of Naval Personnel. There, from October 1947 to May 1948, he served as a White House Naval Aide.

In May 1948 he assumed command of USS Capitaine (SS-336), which, from October 28 of that year until November 6 1949, operated in the Pacific Area. When detached from command of that submarine in February 1950, he was assigned temporarily to the Mare Island Group of the Pacific Reserve Fleet as War Plans Officer. From June 1950 until June 1951 he was a student at Stanford University, from which he received the degree of Master of Arts in Education.

In July 1951 he joined the Staff of Commander Service Force, Atlantic Fleet, and after two years as Assistant Fleet Personnel Officer, was transferred to the Staff of Commander Submarine Squadron TWO and Submarine Group, New London, to serve as Operations Officer for the Submarine Training Group there. When detached in June 1955, he assumed command of Submarine Division ONE HUNDRED TWO, based at New London, and remained in that command until July 1956.

He was a student at the National War College, Washington, DC, during the period August 1956 until June 1957, and after graduation was assigned to the Office of the Chief of Naval Operations, Navy Department, as Undersea Warfare Plans Officer, Strategic Plans Division.  While in this assignment, he had a key role in developing the strategic plans for the employment of the submarine POLARIS weapon system.

In October 1968 he assumed command of Cruiser Destroyer Flotilla SEVEN in the Pacific and in that capacity commanded two “Operation Strike” exercises, simulating actual battle conditions and the Midshipmen Training Squadron of 1969. “For outstanding meritorious service…” in that assignment, he was awarded the Meritorious Service Medal. He was also entitled to the Ribbon for and a facsimile of the Navy Unit Commendation awarded to USS New Jersey, which was his flagship.

He reported in October 1969 as Assistant Chief of Staff for Plans to the Commander in Chief, Pacific and was awarded the Distinguished Service Medal for outstanding services in that capacity. The citation follows in part:  “…Through his leadership, professional acumen and executive ability, (he) insured the development and maintenance of operational and strategic concepts and plans for the United States in the Pacific Command…” He continued to serve in that capacity following his retirement, effectively 1 July 1971 and until 31 July 1972. “For exceptionally meritorious conduct…from July 1971 to July 1972…” he was awarded a Gold Star in lieu of the second Legion of Merit. The citation further states:

“During this turbulent period of withdrawal from the Republic of Vietnam and major forces adjustments, (he) personally developed major plans and policy concepts which, when implemented, have substantially improved the progress of Vietnamization and the posture of friendly governments in Southeast Asia, and strengthened the position and influence of the United States throughout the Pacific, Indian Ocean and Asia areas…”

Rear Admiral Vasey was a member of Hollywood Lodge No. 355, F & M, Hollywood, California, and the US Naval Institute, Annapolis, Maryland. He was interested in sports, especially golf, swimming, scuba diving, and soccer, having been a member of the Swimming Teams (Varsity, Class and Battalion) and Battalion Soccer Team while a Midshipman at the Naval Academy.