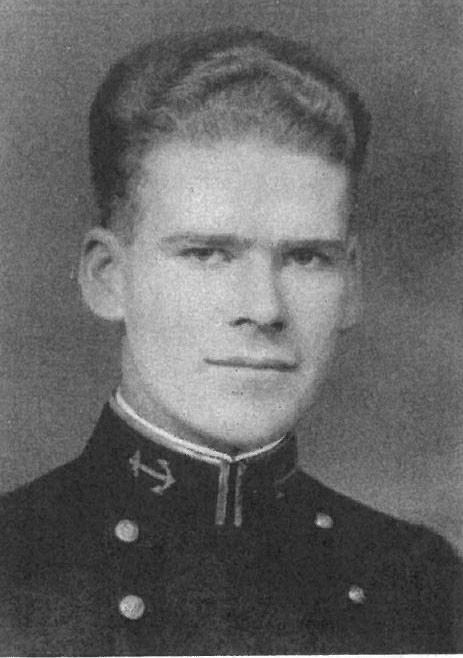 Herbert John Campbell was born in Willow Springs, Missouri, on October 4, 1909, son of William Herbert and Lota Esther (Murray) Campbell.  He attended Klamath Union High School, Klamath Falls, Oregon, prior to his appointment to the US Naval Academy, Annapolis, Maryland, from the state of Oregon in 1928.  As a Midshipman he won his Naval Academy monogram in soccer in 1931.  Graduated and commissioned Ensign on June 2, 1932, he subsequently progressed in rank to that of Captain, to date from January 1, 1951, and was retired in that rank on July 1, 1960.

Following graduation from the Naval Academy in 1932, he joined USS Nevada, and in October 1934 was detached for training at the Naval Air Station, Pensacola, Florida.  In July 1935 he reported on board USS Raleigh, transferring in May 1937 to USS Kane.  While he was attached, the Raleigh and Kane were units of Squadron FORTY-T, operating the European waters during the Spanish Civil War.  When the Kane was decommissioned in April 1938, he was then ordered to duty in USS Salinas.

He was Personnel Officer and Athletic Officer at the Naval Air Station, Pensacla, from May 1939 to March 1941, after which he assisted in the fitting out of USS Washington at the Navy Yard, Philadelphia, Pennsylvania.  He joined that battleship upon her commissioing, May 15, 1941, to serve throughout World War II.  "For meritorious achievement as Air Defense Officer, Communication Officer and Navigating Officer of the USS Washington during operations against enemy Japanese forces in the Pacific War Area from July 1942 to June 1945..." he was awarded the Bronze Star Medal with Combat "V."  The citation further states in part:

"Efficiently performing his duties as Air Defense Officer, Commander Campbell aided materially to the effectiveness of his ship's five inch batteries, particularly at the Battle of Guadalcanal when serious damage wa inflicted on enemy surface units.  As Navigating Officer, he efficiently guided his ship through waters which were inadequately charted or otherwise hazardous for navigation...(He) contributed materially to the success of the Washington in the Pacific..."

Detached from the Washington in December 1945, he next had instruction at the Naval War College, Newport, Rhode Island.  During the period June 1946 to May 1949 he was an Instructor at the Naval School, General Line, Newport, after which he commanded USS Adria until July 1950.  He again attended a course at the Naval War College, Newport, and in June 1951 reported as Training Officer with the Fleet Training Group and Underway Training Unit, Chesapeake Bay, with headquarters in Norfolk, Virginia.  He continued to serve in that capacity until October 1952, when he joinrd the staff of Commander Cruiser Division ONE as Chief of Staff.  He was awarded the Legion of Merit with Combat "V," for "exceptionally meritorious conduct...(in the latter capacity) during operations against enemy aggressor forces in Korea from March 4 to June 27, 1953..."  The citation further states in part:

"Throughout this period, Captain Campbell discharged his many responsibilities with exceptional skill and diligence and effectively directed and led the staff of Commander Cruiser Division ONE in planning naval gunfire strikes by heavy support ships on the east coast of Korea.  A capable and resourceful officer, he rendered invaluable assistance tot he Division Commander by clearly and concisely evaluating operations and, through his excellent judgment in gunnery and tactics as applied to shore bombardment, contributed materially tothe effective employment of naval surface power in the interdiction of enemy movement and resupply, and tothe direct support of friendly ground forces in Northeast Korea..."