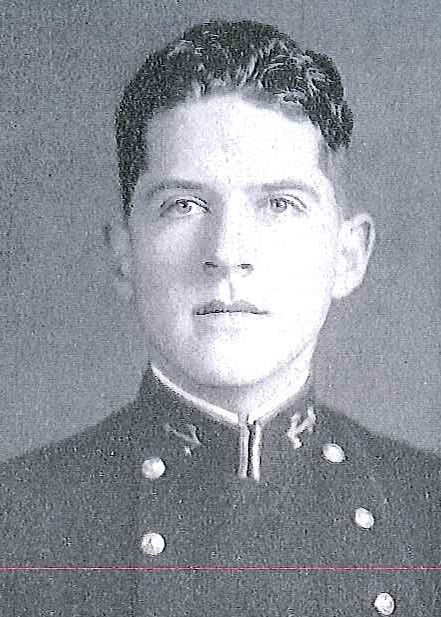 David Shelton Edwards, Jr., was born in Piedmont, California, on July 24, 1911, son of David S. and Ethel Elizabeth (Martin) Edwards. He grew up on the shores of San Francisco Bay and the Pacific, and after graduation from Piedmont High School went to sea as a deck boy on SS Ventura, of the Matson line, at the age of 16 in the summer of 1928. He attended Leland Stanford University (1928-1929) prior to entering the US Naval Academy, Annapolis, Maryland, on appointment from California, on June 30, 1930. He was graduated and commissioned Ensign on May 31, 1934, and subsequently advanced in rank to that of Captain, to date from May 1, 1953.

After graduation from the Naval Academy in May 1934, he served continuously at sea until May 1946, three days short of twelve years. Reporting first to USS Portland, a cruiser of the Pacific Fleet, he served for two years as a junior officer in the Antiaircraft Division and F. Division. From May 1936 to June 1937 he was Second Division Officer of USS Whitney, a destroyer tender operating from San Diego, California. He then served in the destroyer Sands, first as Assistant First Lieutenant and Assistant Engineer, later as First Lieutenant, and during her decommissioning at San Diego, as Acting Executive Officer.

From September 1938 to October 1939 he was Communications Officer, with various collateral duties, on board USS Mahan, and for fourteen months thereafter served in USS Bailey on Neutrality Patrol out of Galveston, Texas. In the latter destroyer he had successive duty as First Lieutenant and Gunnery Officer, Engineering Officer, and Acting Executive Officer, completing destroyer duty in December 1940. During the two and one half years to follow, he was Third Division Officer, Main Battery Officer and Air Defense Officer on board the cruiser Boise, which he joined in California. The Boise operated first as a unit of Hawaiian Detachment; escorted a convoy to Manila, Philippine Islands, in November 1941; was operating in the Netherlands East Indies when the Japanese attacked Pearl Harbor, December 7, 1941; was heavily damaged in the Southwest Pacific area on October 11-12, 1942 at Cape Esperance.

He was awarded the Silver Star Medal "For conspicuous gallantry and intrepidity as Starboard 5-inch Battery Control Officer aboard USS Boise during action against enemy Japanese forces off Cape Esperance, Guadalcanal, Solomon Islands, on the night of October 11-12, 1942…" The citation states that he directed his battery "with superb efficiency picking up targets quickly and spotting correctly, despite the face that his ship was under terrific fire…"

"For exceptionally meritorious conduct…as Flag Secretary and Planning and Operations Officer on the staff of Commander Cruiser Division THIRTEEN, during operations against enemy Japanese forces in the Central and South Pacific War Areas from May 19, 1943 to November 1, 1944…" he was awarded the Legion of Merit with Combat "V." The citation continues: "A capable administrator, Commander Edwards discharged his various duties with efficiency during a period of almost continuous operations against major Japanese controlled islands…(and) contributed materially to the success of his cruiser division and to the long-range effectiveness of our sustained drive against the Japanese…"

He was also awarded the Bronze Star Medal with Combat "V," and following citation: "For heroic service as Senior Aide, Operations Officer and Flag Secretary to Commander Cruiser Division THIRTEEN, in action against enemy forces in the Mediterranean and in the North, South and the Central Pacific War Areas from May 1943 to March 1945. A skillful and courageous leader, (he) assisted in the preparation of the plans and direction of the successful deployment of the ships of the division for air strikes, observation reconnaissance and support bombardments against the enemy…(and) contributed immeasurably to the success of his division in the assault operations…"

He assumed command of USS Ault (DE 698) in June 1945. Under his command that destroyer escort participated in the THIRD Fleet operations against Japan during the period July 10 to August 15, 1945, and had occupation duties from August 1945 until January 1946. He brought her back to the United States (East Coast) and was detached in May 1946. During the year following, he was assigned to the Office of the Chief of Naval Operations (Operational Intelligence) where he preparted [sic: prepared] ONI publications, including OpIntel and POW Manuals. He attended the Artillery School at Fort Bliss (El Paso) Texas, the Joint Army-Navy Guided Missiles School, from July 1947 until June 1948, and in July assumed command of USS Hyman (DD 732), based first at Newport, Rhode Island, later New Orleans, Louisiana. Under his command the Hyman cruised in the Western Atlantic Area and had one tour in the Mediterranean.

Duty as an instructor in Administration and Leadership on the staff of the US Naval School (General Line), Newport, Rhode Island, from September 1949 to August 1950, preceded command, for a year of USS Donner (LSD 20). The Donner, recommissioned at Charleston, South Carolina, on October 10, 1950, was assigned to the SIXTH Fleet on February 7, 1951 and under his command took part in Operation "BLUEJAY" to Thule in August 1951, after which he was detached. During the next two years he served on the staff of Commander in Chief Atlantic, Commander in Chief Atlantic Fleet, and Commander in Chief Western Atlantic, with duty in the Operations Division and as Assistant to the Fleet Operations Officer (for Operational Planning).

In August 1953 he reported to the Naval War College, Newport, Rhode Island, where he completed the ASSP Course in June 1954, and later served on the staff. He was Commander Destroyer Division 162 from July 195, until September 1956, after which he had duty as Director of the Plans Division in the Office of Information, Navy Department. He remained there until July 1958 and now served as Commanding Officer of Tolovana (AO-64).

His hobbies are tennis, golf, and painting.