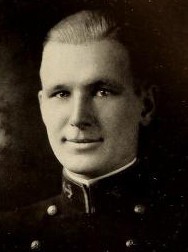 George William Bauernschmidt was born on March 26, 1899, in Baltimore, Maryland, son of William and Marie Oehl von Hattersheim Bauernschmidt.  He attended Gilman County School, Severn School, Severna Park, Maryland, and Princeton University, Princeton, New Jersey, before his appointment to the US Naval Academy, Annapolis, Maryland, from the Fourth District of Oklahoma in 1918.  Graduated and commissioned Ensign on June 2, 1922, he served as an officer of the line until he was transferred to the Supply Corps of the US Navy in September 1935, and commissioned Passed Assistant Paymaster with the rank of Lieutenant.  He subsequently advanced in rank, attaining that of Rear Admiral to date from July 1, 1948.

Following graduation from the Naval Academy in June 1922, he had a month’s temporary duty in the Bureau of Ordnance, Navy Department, Washington, DC after which he joined the USS North Dakota.  Detached in December 1922, he reported for instruction in torpedoes at the Naval Torpedo Station, Newport, Rhode Island, completing the course in August 1923.  He served in the USS New Mexico until June 1925, followed by six months’ instruction in submarines at the Submarine Base, New London, Connecticut.

From December 1925 until April 1926 he was assigned to the Submarine Division NINE, after which he had duty in the submarine R-3.  He commanded the USS R-2 between May 1927 and October 1928, followed by service at the Submarine Base, Pearl Harbor, Territory of Hawaii.  In July 1929 he returned to the Naval Academy, where he was an instructor in the Department of Electrical Engineering and Physics, until ordered in December 1930 to the Naval Station, Tutuila, American Samoa.  Upon reporting in March 1931, he assumed the duties of Assistant Captain of the Yard and Chief Customs Officer.

He had consecutive duty, September 1932 to June 1935, in the USS Relief and USS Nevada, and while serving in the latter received a Letter of Commendation for her excellence in engineering in 1935.  Upon detachment from the Nevada, he had three months’ duty in the Sixth Naval District, Charleston, South Carolina.  Following his transfer to the Supply Corps of the US Navy in September 1935, he attended the Naval Finance and Supply School, Philadelphia, Pennsylvania, and completing instruction in May 1936 he joined the USS Beaver as Assistant to the Supply Officer and as Squadron Intelligence Officer.  While attached to that vessel, he received a Letter of Commendation in connection with communication excellence in 1937.

Detached from the Beaver in July 1937, he reported as Supply, Disbursing and Accounting Officer at the Naval Research Laboratory, Anacostia Station, Washington, DC, where he remained until July 1939, when he joined the USS New York as Supply Officer.  In January 1942 he became Assistant to the Supply Officer at the Navy Yard, Philadelphia, Pennsylvania, and in October 1943 was ordered to duty on the staff of Commander, Destroyers, Pacific Fleet.  In April 1943 he had duty in connection with the establishment of the Naval Supply Depot, US Naval Operating Base, Oran, Algeria, and on May 26 he became Assistant to the Supply Officer in Command. He was designated Supply Officer in Command with additional duty as Supply Officer, Naval Operating Base, Oran, in June 1943.

For exceptionally meritorious service in the latter assignment, he was awarded the Legion of Merit and cited in part as follows: “…in the performance of outstanding services…as Supply Officer in Command of the Navy Supply Depot, United States Naval Operating Base, Oran, Algeria, prior to and during the Amphibious invasion of the Island of Sicily in July 1943, and the Italian Mainland in September 1943.  Exercising keen judgment and thorough professional knowledge, (he) initially organized and established the Naval Supply Depot as a unit of the Naval Operating Base performing various functions in fleet maintenance and supply…the ready cooperation of his command during two major amphibious operations against the enemy was exemplified in the vital and effective support rendered participating units.”

Duty on the staff of Commander, Naval Forces in Europe, with Headquarters at London, England, from January until June 1944, preceded duty on the staff of Commander Naval Ports and Bases, France.  He returned to the United States with orders of July 1944 to the Bureau of Naval Personnel, Navy Department, Washington, DC.  He served there for a month and was transferred to the Bureau of Supplies and Accounts, Navy Department.  On January 1, 1945 he reported as Executive Officer of the Naval Supply Depot, Mechanicsburg, Pennsylvania, and on August 5, 1945 became Supply Officer in Command of the Naval Supply Depot, Guam, Marianas Island, known as the largest “filling station” in the Central Pacific, or the “Pacific Supermarket,” because of the super-service it rendered the fighting forces afloat.

From April 1946 until July 1947 he was a member of the Navy Regulations Board, Navy Department, Washington, DC, after which he again served in the Bureau of Supplies and Accounts.  In February 1948 he became Assistant Chief of the Bureau of Supplies and Accounts for Logisitics Plans Coordination, and on October 4, 1949 assumed the duties of Deputy Chief of that Bureau.  In August 1950 he was assigned additional duty as Navy Member of the Advisory Council of the Military Traffic Service.  (The purpose of this newly established Traffic Service, was to provide at the staff level, under one authority, efficient and economical traffic management for the movement within the continental United States of persons and things for all agencies or departments of the Department of Defense, subject to the policies of the Joint Chiefs of Staff and Munitions Board).

In December 1951 he reported as Commanding Officer of the Naval Supply Center, Pearl Harbor, Territory of Hawaii, and in February 1954 transferred to command of the Naval Supply Depot, Clearfield, Utah.  He remained there until relieved of all active duty pending his retirement, effective May 1, 1955.