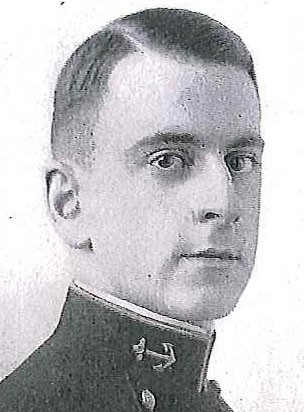 Harold Carlton Fitz was born in Somerville, Massachusetts, on February 17, 1898, and was appointed to the U.S. Naval Academy, Annapolis, Maryland, from the Ninth District of his native state in 1916. While a Midshipman he served during World War I. Graduated with credit and commissioned Ensign in June 1919, with the Class of 1920, he attained the rank of Captain to date from June 18, 1942. Transferred to the Retired List of the Navy, on June 30, 1949, he was advanced of Rear Admiral.

After graduation from the Academy in June 1919, he served consecutively in the USS Zeppelin (ex- German ship in transport service), the USS Rochester, and the USS Pruitt until June 1922. Following instruction at the Naval Torpedo station, Newport, Rhode Island, he served in the USS Nevada from January 1923 until May 1925 and in the USS Doyen the following years.

In July 1926 he reported for duty as Assistant District Communication Officer, Sixth Naval District, Charleston, South Carolina and later became District Communication Officer, with additional duty as Inspector-Instructor, Naval Reserve Communications, and also commanded the Naval Radio Stations within the Sixth Naval District. Detached from that assignment in June 1928 he returned to Sea the following duty as Squadron Radio Officer and Aide on the assigned additional duty as Squadron One, Control Force, and from staff of the Commander, Mine Squadron One, Control Force, and from November 1930 until April 1931 served as Aide and Flag Lieutenant on the staff of Commander, Mine Squadron One, U.S. Fleet.

In May 1931 he reported to the Naval Unit, Edgewood Arsenal, Edgewood, Maryland, for instruction in chemical warfare. He was assigned in June to the Office of the Judge Advocate General, Navy Department, Washington, D.C., completing a postgraduate course of instruction in law under the supervision of that Office at Harvard University Law School, Cambridge, Massachusetts, where he received his degree in law in 1934.

Upon completion of his instruction he was assigned to the battleship Texas from July until December 1934, after which he commanded the USS Monocracy, operating on Yangtze, from February 1935 until April 1936. Transferred to duty as Gunnery Officer of the cruiser Augusta, flagship of the Commander in Chief, Asiatic Fleet, he was detached from that duty in June 1937 and returned to the United States, reported in September 1937 for duty in the Office of the Judge Advocate General, Navy Department. He joined the USS Arizona in April 1939, serving as her Navigator for a year.

On April 8, 1941, he assumed command of the USS Warrington, serving in command of that destroyer until December 8, 1941, the day following the outbreak of World War II. On December 20, 1941, he assumed duty as Commander, Destroyer Division Twenty-Five, which operated with Task Force Twenty-Four, from March 1942. For his services in that command, which extended to June 5, 1944, he received a Letter of Commendation, with authorization to wear the Commendation Ribbon, from the Secretary of the Navy, for convoy operations in the North Atlantic during the early stages of the war, and was awarded the Bronze Star medal for similar operations during 1942.

He had duty at Headquarters, Commander in Chief, U.S. Fleet between June and October 1944, when he was ordered to duty with the Pacific Fleet. Upon reporting on October 30, 1944, he assumed command of the USS Santa Fe and under his command that cruiser participated in the fast carrier strikes on Formosa, Okinawa, Iwo Jima, and in the South China Sea. On March 19, 1945, when the USS Franklin was struck, the Santa Fe went alongside twice to remove more than eight hundred men, many of them wounded, and helped to fight fires on that carrier, which was severely damage by an enemy attack off Kyusha.

Operating alongside the burning Franklin the Santa Fe for more than two hours aided in the evacuation of men, who stepped from the flaming decks of the big carrier to the safety of the Santa Fe. She first circled, came along the starboard side, and received wounded by gangway and makeshift mailing breeches-buoys for forty five minutes until forced to cast off from the rapidly drifting Franklin. Then he brought the Santa Fe up to the Franklin at twenty five knots, gave her a hard right rudder and backed full on both engines, stopping dead in the water a few feet off the Franklin for a perfect approach, a feat characterized by the Commanding Officer of the Franklin as “a most daring piece of seamanship.”

Passing hose lines to the carrier’s forward deck and puring water on the blazing flight deck, men from the Santa Fe, with those of the Franklin, brought the flames under control. “For extraordinary heroism….” on that occasion, he was awarded the Navy Cross, and for services in command of the Santa Fe prior to an after this rescue mission he was awarded the Legion of Merit.

Relieved of command of the Santa Fe on October 17, 1945, he reported as Chief of Staff and Aide on the staff of Commander, Cruiser-Destroyer, Pacific Fleet. He continued in that duty until December 1945, when he transferred to the staff of the Commander in Chief, U.S. Pacific Fleet. While in that assignment he had additional duty in the Office of the Naval Inspector, Navy Department, Washington, D.C. From April 1946 until he was transferred to the Retired List, June 30, 1949, he served as Chief of Staff and Aide to the Commandant, First Naval District, Boston, Massachusetts.

In addition to the Navy Cross, the Legion of Merit, the Bronze Star Medal and the Commendation Ribbon, Rear Admiral Fitz has the World War I Victory Medal, Atlantic Fleet Clasp (USS Rhode Island); the American Defense Service Medal, Fleet Clasp (USS Warrington), the Asiatic-Pacific Campaign Medal with bronze stars, the World War II Victory Medal, and the Philippine Liberation Ribbon. He has also been awarded the Order of the British Empire (rank of Commander from the Government of Great Britain.