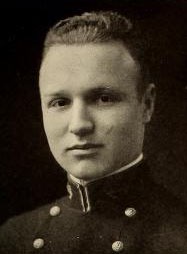 Wilson Patterson Cogswell was born in Attica, New York, on December 11, 1900, son of George D. and Grace Helen (Roberts) Cogswell. He attended Attica High School, graduating in 1916, and on July 20, 1917, shortly after the United States entered World War I, enlisted in the US Marine Corps. He served with the Marines until July 20, 1918, when he was honorably discharged to accept appointment to the US Naval Academy, Annapolis, Maryland. As a Midshipman he participated during the summer of 1919, 1920, and 1921, in the practice cruises aboard the battleships Alabama, Kansas and Michigan, respectively. Graduated and commissioned Ensign on June 3, 1922, he subsequently advanced in rank, attaining that of Captain to rank from June 21, 1942. On June 30, 1952 he was transferred to the Retired List of the U.S. Navy.

Following graduation from the Naval Academy in 1922, he had temporary duty in the Bureau of Ordnance, Navy Department, Washington, DC, until August 31 of that year, when he joined the USS North Dakota. Detached from that battleship in June 1923, he then served the following year in the USS Mercy, and in May 1924 reported aboard the USS Henderson.

He had instruction in radio engineering at the Postgraduate School, Annapolis, Maryland, until June 1930 in the Office of Naval Communications, Naval Operations, and the Bureau of Engineering, Navy Department, until August of that year. He continued the course at Harvard University, Cambridge, Massachusetts, from which he received the degree of Master of Science in June 1931. In July of that year, he was assigned to the Naval Air Station, Anacostia, DC.

He joined Fighting Squadron 5, based on the aircraft carrier Lexington in July 1932, serving with that squadron until June 1934 after which he had duty in connection with aircraft radio in the Bureau of Engineering (later consolidated with the Bureau of Construction and Repair and designated Bureau of Ships), Navy Department. In May 1937 he reported as Communications Officer on the staff of the Commander Aircraft Base Force, (redesignated Aircraft, Scouting Force, and from June 1938, Aircraft, Battle Force). After brief between May and August 1939 with Patrol Squadron 2, he transferred to Patrol Squadron 22 as Commander Officer.

From July 1941 to October 1942 he was in charge of Project Fix (radio controlled aircraft) and Project Roger (Microwave Radar Installations), at the Naval Aircraft Factory, Philadelphia, Pennsylvania, after which he commanded the USS Curtiss, then (1942) flagship of Commander Aircraft South Pacific and engaged in tending patrol plane squadrons from the harbor of Espiritu Santos, New Hebrides. Detached from command of the Curtiss in October 1943, he was ordered to duty as Island Commander of Apamama Island, Gilbert Islands, during the capture and occupation thereof from the Japanese. He remained there until June 1944, when he returned to the United States and became Commanding Officer of the Combined Research Group, a subordinate command of the Naval Research Laboratory, Anacostia, DC. For duty in that capacity during a period of World War II, from July 29, 1944 to February 1945, he received a Letter of Commendation, with authorization to wear the Commendation Ribbon, from the Secretary of Navy. The citation follows in part:

“He directed the efforts in a highly important project in which the Army-Navy and British participated. During his term of office the development of the fundamental and components of this system was continued and he performed liaison work of great value to the Naval Department with the combined committees and governmental department interested in this project.”

On February 1, 1945 he was assigned as Director of the Electronics Division, Bureau of Aeronautics, navy Department, Washington, DC, continuing to serve in that capacity until July 1946 when he became Commanding Officer of the USS Shangri-La. Under his command, that aircraft carrier and her air detachment participated in the atomic bomb test, known as “Operation Crossroads” held in Bikini Lagoon, Marshall Island, in July 1946. Returning to duty ashore in September 1947, he reported first as Deputy to the Assistant Chief of Operations for Guided Missiles and in July 1948 as Navy Member of the Air Navigation Development Board jointly sponsored by the Departments of Defense and Commerce. In July 1950 he became Commander Fleet Air, Guam, responsible for support of Navy patrol squadron operating in the Far East.

He was assigned briefly, September- November 1951, to the Bureau of Aeronautics, Navy Department, after which he had duty in the Executive Office of the Secretary, Navy Department, as Director of the Electronics Production Resource Agency of the Departments of the Army, navy, and Air Force, Washington, DC, where he remained until March 1952 when he was assigned as Naval Advisor to the President’s Airport Commission headed by Lieutenant General J.H. Doolittle, USA (Ret.). He was relieved of all active duty and retired, effective June 30, 1952.