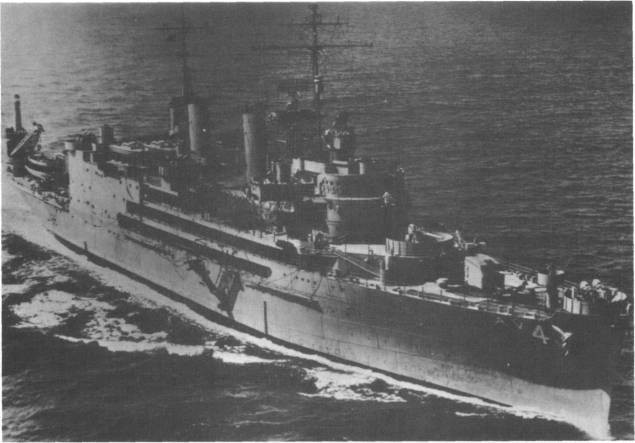 Glenn Hammond Curtiss, the renowned pioneer in aviation, was born 21 May 1878 in Hammondsport, N.Y. He set many aeronautical records and designed several types of planes, including the Navy Curtiss flying boats which in 1919 were the first aircraft to cross the Atlantic. Curtiss trained many of the early naval aviators, and established a firm to manufacture aircraft. He was actively concerned with naval aviation until his death on 23 July 1930.

Curtiss operated out of Norfolk and in the Caribbean for training and in fleet exercises through the spring of 1941. On 26 May she got underway for Pearl Harbor from which she served on patrol as well as tending two patrol bomber squadrons. From 15 October to 9 November she voyaged to Wake Island carrying aviators, air-crewmen, and cargo to reinforce the garrison there. When the Japanese attacked Pearl Harbor Curtiss got underway immediately, firing at the enemy planes. At 0836 she sighted a periscope and opened fire. A torpedo from the submarine missed Curtiss, smashing into a dock at Pearl City. Four minutes later the Japanese midget submarine surfaced and was further damaged by gunfire before diving again, after which Monaghan (DD-354) took over with a depth charge attack. Curtiss turned her attention to the air again. At 0905 she hit an enemy plane which crashed into her No. 1 crane and burned. Three minutes later she splashed a plane, then began firing at a dive bomber. A bomb from this plane crashed Curtiss in the vicinity of her damaged crane and exploded below decks, setting the hangar and main decks and No. 4 handling room on fire, as the plane splashed off her port beam. Despite 19 dead and many wounded, Curtiss' crew quenched the fires, then turned to for emergency repairs. On 28 December she was underway for San Diego for permanent repairs and replacement of the damaged crane with 20mm. guns. Her repairs completed in only 4 days, she was back in Pearl Harbor 13 January 1942 to begin the job of ferrying men and supplies to forward bases at Samoa, Suva, and Noumea until June.

Departing Pearl Harbor 2 June 1942 Curtiss served as flagship for Commander, Naval Air, South Pacific, at Noumea from 16 June to 4 August, then served as seaplane tender, flagship, repair and supply ship for destroyers and small craft engaged in the Solomons operation from Espiritu Santo until 9 July 1943. After overhaul at San Francisco, she arrived at Funafuti, Ellice Islands, 7 November to serve as flagship for Commander Air, Central Pacific, based at Funafuti until 29 December 1943, then at Tarawa (31 December 1943-8 March 1944), Kwajalein (10 March-26 June), Eniwetok (27 June-9 August), Saipan (12 August 1944-1 January 1945), and Guam (2 January-7 February).

After repairs at San Francisco, Curtiss sailed to Okinawa, arriving 22 May 1945 to serve as flagship for Commander, Fleet Air Wing 1. On 21 June a kamikaze and its bomb ripped two holes in her hull and exploded on the third deck, killing 35 and wounding 21 of her crew. Effective damage control kept her afloat and 4 days later she was underway for the west coast and an overhaul at Mare Island Navy Yard.

Rejoining the Fleet in the Western Pacific, Curtiss embarked Commander, Fleet Air Wing 1 (who was also Commander Task Force 75) at Okinawa 5 December 1945. She joined in fleet exercises, operated with patrol squadrons in the Formosa Strait, ferried men and supplies to outlying bases and made several visits to Tsingtao, China, until 8 March 1947 when she headed for the west coast for overhaul and alterations recommended by the Atomic Energy Commission for stowage of scientific equipment.

Curtiss operated off the California coast on a number of fleet and training exercises until early in 1949 when she served as flagship for Commander First Fleet for 3 weeks of amphibious operations in Alaskan waters to evaluate cold weather equipment. She continued to serve as flagship for this command during amphibious exercises off Seattle during the summer of 1949. Shortly after the outbreak of the Korean War, Curtiss sailed from San Diego to join the 7th Fleet in July 1950 on patrol in the Korean Strait. Sailing out of Iwakuni and Kure, she tended two PBM Mariner squadrons and a squadron of British Sunderlands operating over Korean territory. She returned to San Francisco 14 January 1951 for further alterations to fit her as a base for scientific work.

From 23 February to 13 June 1951 Curtiss served as flagship for Operation "Greenhouse" and was the base for civilian and military technicians during the atomic tests at Eniwetok. She also provided meteorological information and operated a boat pool. Curtiss served at San Diego in local operations until 29 September 1952 when she again sailed to Eniwetok as flagship during the atomic tests of Operation "Ivy." Returning to San Diego 4 December, she cruised the west coast, and visited Acapulco, Mexico in 1953. From 10 January to 28 May 1954 she participated in Operation "Castle" during which the first hydrogen bomb was exploded.

Fitted with a helicopter deck during November and December 1954, Curtiss engaged in a large scale amphibious exercise on the coast of California in March 1955. From 21 March to 8 August 1956 she took part in Operation "Redwing," the atomic tests at Eniwetok during which she was visited by the Assistant Secretary of the Navy. As flagship for the First Fleet she was visited by Vice Admiral A. H. Vdel, Commander-in-Chief of the Royal Danish Navy on 20 September 1956.

Curtiss departed San Diego 27 December 1956 for Operation "Deep Freeze II," carrying sailors of the wintering-over party, and scientists to take part in the International Geophysical Year program. Calling at Port Lyttelton, New Zealand, from 12 to 15 January 1957, she entered McMurdo Sound 19 January and transferred cargo by helicopter to Glacier (AGB-4). From 21 to 28 January she "put men and cargo ashore in the same manner as she lay moored to the ice shelf, continuing these operations at Little America from 30 January to 6 February. She carried out ice reconnaissance to Okuma Bay and Sulzberger Bay, then departed McMurdo Sound 10 February. She called at Port Lyttelton and Auckland, New Zealand, and Sydney, Australia, before returning to San Diego 25 March to undergo repairs for ice damage. She continued her local operations until placed out of commission in reserve 24 September 1957.