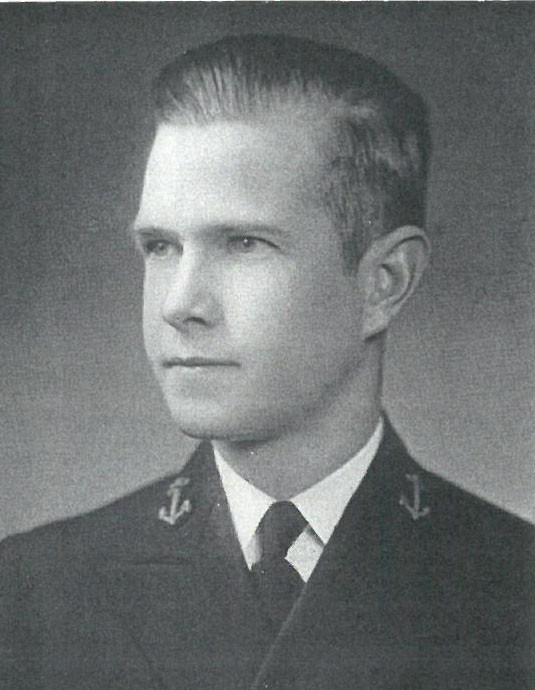 Turner Foster Caldwell, Jr., was born in Narbeth, Pennsylvania, on November 17, 1913, son of Captain T. F. Caldwell, USN (now deceased) and Mrs. Eleanor Owings Caldwell. He attended Severn Preparatory School, Severna Park, Maryland, before entering the US Naval Academy, Annapolis, Maryland, on appointment at large in 1931. upon graduation on June 6, 1935, he was commissioned Ensign in the US Navy and subsequently progressed in rank to that of Rear Admiral, to date from April 1, 1963 and vice Admiral, to date from November 1, 1967.

After graduation from naval Academy in June 1935, he joined USS Saratoga and in May 1936 transferred to USS Hull. Detached from that destroyer in June 1938, he next had flight training at Naval Air Station, Pensacola, Florida. Designated Naval Aviator in July 1939, he was assigned to Scouting Squadron 5, based on USS Yorktown and later USS Enterprise. In August 1942, after the bombing of the Enterprise, his Air Group was shore based at Henderson Filed, Guadalcanal, Solomon Islands,. And in October of that year the squadron was decommissioned at the Naval air Station, Kaneohe. Oahu, TH.

He has the Ribbon with two stars for the Presidential Unit Citations awarded USS Enterprise and the First Marine Division, Reinforced, to which his squadron was assigned while shore based. He was personally awarded the Navy Cross and Gold Stars for two additional awards, with citations, in part to follow:

Gold Star in lieu of the Second Navy Cross: “For extraordinary heroism…as Commanding Officer of a detachment of his Bomber Squadron in action against enemy Japanese forces during their assaults on our Guadalcanal positions in the period August 24 to September 23, 1942…”

Gold Star in lieu of the Third Navy Cross: For contributing to the destruction of three enemy ships at Salamaua and Lea, New Guinea, on March 10, 1942.

From October 1942 until December 1943 he served as Training Officer at the Naval Air Station, Vero Beach, Florida, and in that capacity set up the Training Department. He formed, put into commission, and commanded Fighting Squadron (Night) Seventy-nine which in August 1944 was redesignated Night Carrier Air Group Forty-one and operated with task Force Thirty-eight. In February 1945 the Air Group returned to the Naval Air Station at Sand Point, Seattle, Washington, where it was decommissioned. For service with that unit he was awarded the Distinguished Flying Cross and the Legion of Merit. Citations follow, in part:

Distinguished Flying Cross: “For heroism and extraordinary achievement…in operation against enemy Japanese forces in the Philippine Islands, September 21, 22 and 24, 1944…On September 2, he destroyed six enemy planes on the ground and, on September 24, led a group of fighters in a daring attack on enemy ships, sinking one hostile tanker and damaging several other…”

Legion of Merit: “…(His) superb direction of the formulation of tactics contributed essentially to the establishment and maintenance of this new phase (night fighters) of Naval aviators…”

He was Commanding Officer of the Night Attack and Combat Training Unit at the Naval Air Station, Barber’s Point, Oahu, TH, from March to November 1945, after which he was assigned to the Fighter Design Branch, Piloted Aircraft Division of the Bureau of Aeronautics, Navy Department, Washington, DC. While there he established a new world’s speed record (640.7 miles per hour) in a jet-powered plane at Muroc Dry Lake, California, on August 20, 1947, and was awarded a Gold Star in lieu of the Second Distinguished Flying Cross.

From November 1947 until February 1949 he was in command of the Carrier Air Group Forty-eight, after which he served as Assistant Director of the Flight test Section of the Naval Air Test Center, Patuxent River, Maryland. In August 1949 he became the first Navy pilot to exceed the speed of sound, while flying an experimental rocket-propelled plane. In June 1951 he reported as Executive Officer of USS Franklin D. Roosevelt, and in February 1953 was detached for duty at Supreme Headquarters, Allied Powers, Europe, at Paris, France. He remained there until August 1955, then had instruction at the National War College, Washington, DC.

From January 1962 to September 1963 he was Assistant Director of the Strategic Plans Division, Office of the Chief of Naval Operations, Navy Department, after which he commanded Carrier Division Nineteen (redesignated in January 1964, Commander Anti-Submarine Warfare Group Five). In August 1964 he became Deputy Director of Anti-Submarine Warfare Programs, Office of the Chief of Naval Operations and in February 1966 reported as Deputy Chief of Staff and Deputy Chief of Staff for Plans and Operations to the Commander in Chief, US Atlantic Fleet.

In October 1967 he assumed duty as Director of Antisubmarine Warfare Programs, Office of the Chief of Naval Operations. He was awarded the Distinguished Service Medal and cited, in part as follows: “…Vice Admiral Caldwell demonstrated superior leadership, coupled with outstanding, planning and managerial expertise, in making significant advances in US Navy antisubmarine warfare (ASW) capabilities…” On May 1, 1971 he was transferred to the retired List of the US Navy.