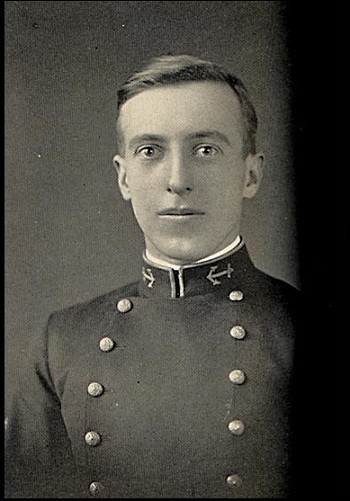 Rear Admiral Martin was born in Augusta, Georgia, 4 January 1892. He attended the Blackville Graded School, Blackville, South Carolina, and the College of Charleston, Charleston, South Carolina, before being appointed to the Naval Academy from that state in June 1910. While at Annapolis he was Editor-in-Chief of the Lucky Bag. He was graduated and commissioned Ensign in June 1914 and progressed in grade until promoted to Commodore 24 May 1943. He was transferred to the Retired List of the Navy in the rank of Rear Admiral on 1 November 1946.

After graduation in June 1914, Rear Admiral Martin joined the USS Kansas, serving in her until October 1915, when he was assigned temporary duty as Instructor of Enlisted Men, Naval Training Station, Great Lakes, Illinois. From November 1916 until September 1919 he was in the USS Wyoming which, during the World War, operated in the North Sea as a unit of the Sixth Battleship Squadron of the British Grand Fleet. During the night of 20 November 1918, while serving in the Wyoming, he participated in the operations of escorting the German High Seas Fleet to Scapa Flow for internment and witnessed the surrender. Rear Admiral Wilson also took part in the ceremonies on 13 December 1918, when the Wyoming escorted the USS George Washington with President Wilson aboard on his way to the Peace Conference at Versailles, into the harbor of Brest France. He returned to the United States and was in the Wyoming when on 26 December 1918, she was reviewed in New York harbor by the Honorable Josephus Daniels, then Secretary of the Navy.

In fall of 1919 Rear Admiral Martin was ordered to the USS Fulton for instruction in submarines and, after qualifying in December, had consecutive duty in the USS 0-4 and the USS K-8 until June 1920, when he assumed command of the K-8. From December 1920 until July 1921 he was commanding officer of the USS R-8 and in September 1921 he joined the USS Eagle #33, serving in her until August 1922, when he was transferred to the USS Chewink.

Rear Admiral Martin was commanding officer of the USS S-19 from December 1923 until June 1926 and, for the next three years, was attached to the Office of the Judge Advocate General, Navy Department, Washington, DC. During this assignment he completed a postgraduate course in law, receiving his Bachelor of Laws degree.

Rear Admiral Martin served as gunnery officer of the USS Memphis from June 1929 until June 1932. During this period he established the first cruiser gunnery school and, in 1930, while he was gunnery officer of the Memphis that vessel established two records in light cruiser gunnery. He received a Letter of Commendation from the Commander, Cruisers, for the success of the gunnery school.

In July 1937, Rear Admiral Martin was transferred to duty at Headquarters, Eleventh Naval District, San Diego, California. Detached in June 1938, he returned to the Office of the Judge Advocate General, serving as Chief of the Administrative Division and later as Officer in Charge of Division of Contracts, Bonds and Real Estate, until January 1941.

Rear Admiral Martin was in command of the USS Henderson, operating with the Fleet, from January 1941 until October 1942, when he was transferred to the Office of the Chief of Naval Operations, Navy Department, Washington, DC. in April 1944, he assumed command of the USS Pennsylvania, one of the battleships damaged by the Japanese at Pearl Harbor, 7 December 1941, and later repaired and modernized. Operating in the Pacific, Rear Admiral Martin commanded her during the Battle of Surigao Strait when, in the early morning hours of 25 October 1944, a US Naval force met and practically annihilated a strong Japanese surface force at the southern entrance to Leyte Gulf in the Philippines. For outstanding services in that command he received a Letter of Commendation from the Commander in Chief, Pacific Fleet, and was awarded the Legion of Merit with the following citation:

Legion of Merit: (with authorization to wear the Combat "V") - "For exceptionally meritorious conduct in the performance of outstanding services to the Government of the United States as Commanding Officer of the USS Pennsylvania during the capture of Leyte Gulf and the landings on Leyte, Philippine Islands, from October 18 to 29, 1944, and during the capture of Lingayen Gulf and the landing on Luzon, Philippine Islands, from January 6 to 18, 1945. Skillfully maneuvering his ship at a close-in fire support unit, Commodore (then Captain) Martin directed his men in delivering effective gunfire against the enemy and, despite intense and prolonged enemy serial attack, contributed materially to the success of operations in this area. His leadership and devotion to duty throughout were in keeping with the highest traditions of the United States Naval Service.

Relieved of command of the Pennsylvania on 5 June 1945, he reported for duty as Commander, Naval Base, Manus Island, and served in that command until 19 April 1946, when he was ordered to the United States. Following temporary duty in the Bureau of Naval Personnel, he was relieved of actively duty on 2 July 1946. He was transferred to the Retired List of the Navy in the rank of Rear Admiral on 1 November 1946.