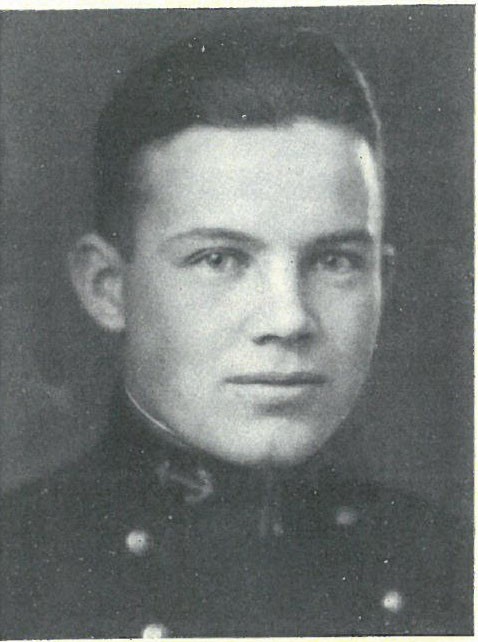 Rex Smith Caldwell was born on September 6, 1901, in Millersville, Missouri, son of the late Robert Lee and Josephine (Barnes) Caldwell. He attended Jackson (Missouri) High School and during World War II served in the US Marine Corps, April 1918 to September 1919. He was appointed to the  US Naval Academy, Annapolis, Maryland, from the Fourteenth District of his native state in 1921, and while there was a member of the football and rifle teams. Graduated and commissioned Ensign on June 4, 1925, he advanced progressively in rank to that of captain to date from February 3, 1948. On June 30, 1956 he was transferred to the Retired List of the US Navy.

After graduation from the Naval Academy in 1925, he joined USS Tennessee, and while serving as Signal Officer of that battleship, was commended for his contribution in connection with the Tennessee winning the Signal Trophy. In April 1927 he reported on board USS Corry, and following a month’s instruction at the Naval Air Station, Pensacola, Florida, was assigned in September 1927 to USS Sapelo. Detached from the latter in June 1928, he was ordered to the Submarine Base, New London, Connecticut, for submarine training.

In December 1928 he reported on board USS V-2, and from June 1932 until March 1934 was assigned to the Eleventh Naval District, with headquarters in San Diego, California. He joined the USS S-43 in April 1934, and in June 1935 transferred to USS S-45. Detached from the latter in July 1935, he next served in USS S-47, and in March 1936 assumed command of USS S-31. under his command, the S-31 won the Engineering Trophy and he personally received a commendatory letter. During the period June 1937- June 1939, he was an Instructor in the Department of Physical Education as the Naval Academy, after which he had duty as Aide and Flag Secretary on the staff of Commander Base Force.

In June 1941 he reported as Gunnery Officer on board USS Arkansas, continuing to serve in that battleship following the United States’ entry into World War II, December 8, 1941 until August 1943, while she operated on Atlantic convoy. He next served as Ordnance Officer at the Norfolk Navy Yard, Portsmouth, Virginia, and in January 1945 assumed command of USS Vulcan. While he was commanding the Vulcan, attached to Service Force, US Pacific Fleet, she was engaged in the repair of ships damaged at Kure, Japan; Noumea; Ulithi; Leyte and Okinawa. Detached from that repair ship in June 1946, he joined the staff of Commander Service Squadron Two as Chief of Staff and Operations Officer.

From July 1948 until May 1949 he was Executive Officer and Industrial Manager at the Naval Ordnance Plant, Meacon, Georgia, and subsequently commanded that activity until September 1951. Following duty in connection with the recommissioning of USS Vesuvius, he assumed command of that ammunition ship in November 1951. Detached in June 1952, he was hospitalized for a short period, and in December 1952 became Commander Sub Group 4, Florida Group, Atlantic Reserved Fleet. In August 193 he transferred to command of Sub Group 2, Philadelphia Group, Atlantic Reserve Fleet, continuing to serve in that capacity until June 1956. He was attached to the Philadelphia Group, Atlantic Reserve Fleet, until relieved of all active duty pending his retirement, effective June 30,1956.