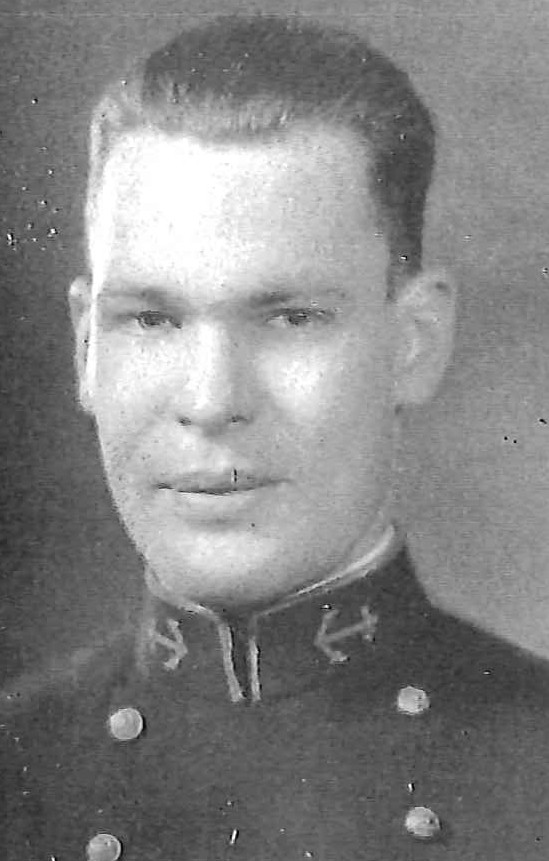 Merril Kinsell Clementson was born in Pittsburgh, Pennsylvania, on February 12, 1910, son of Dr. William A. Clementson and Mrs. (Vida Kinsell) Clementson, now Mrs. V.K. Kelly. He attended Western High School and Devitt Preparatory School, both in Washington, DC, and on July 16, 1928, he entered the US Naval Academy on appointment from the State of Pennsylvania, Resigning in February 1929, he was reappointed in August of that year, and was graduated and commissioned Ensign in the US Navy on June 1, 1933. By subsequent advancement, he attained the rank of Captain, to date from February 1, 1952.

After graduation from the Navy Academy in June 1933, he served for two years in the USS Indianapolis, a cruiser operating as flagship of the Scouting Force. He had instruction at the Submarine School, New London, Connecticut, from June through December 1936, and the next year served in the USS R-4 and USS R-13, units of Submarine Division 4, based at New London. He assisted in fitting out the USS Skipjack at the Electric Boat Company, Groton, Connecticut, and from her commissioning, June 30, 1938, throughout the early period of World War II was attached to that submarine, participating in action in the Philippines, the capture and defense of Guadalcanal, and in two war patrols in the Pacific as her Engineer and Executive Officer.

In April 1943 he assumed command of the USS Snapper, a unit of Submarine Squadron Ten, and was in command of that submarine during two her War Patrols. When detached in January 1944 he returned to the Electric Boat Company to fit out the USS Blueback, and commanded her from her commissioning in April of that year throughout the remaining war period and executing three successful War Patrols in 1945. For World War II service he was awarded the Silver Star Medal, a Gold Star in lieu of the Second Silver Star Medal, the Navy Cross, and the Bronze Star Medal with Combat “V,”

Silver Star Medal: “For conspicuous gallantry and intrepidity while serving as Assistant Approach Officer and Executive Officer of the USS Skipjack during the third, fourth and fifth war patrols of that vessel in enemy held waters. By his complete knowledge of the ship and thorough familiarity with the attack problem, Lieutenant Commander Clementson rendered invaluable assistance to his Commanding Officer in sinking 36,000 tons of hostile shipping and damaging a large enemy tender...”

Gold Star in lieu of the Second Silver Star Medal:  “For conspicuous gallantry and intrepidity… as Commanding Officer of the United States Submarine on patrol in enemy-controlled waters. Despite the strain of prolonged undersea operations in perilous hostile waters, (he) performed his essential duties with outstanding efficiency, employing skillful evasive tactics to counteract enemy countermeasures. By his valiant and inspiring leadership, he contributed to the sinking of an important amount of enemy shipping, including a Fubuki-class destroyer…”

Navy Cross: “For  extraordinary heroism as Commanding Officer of the USS Snapper during a War Patrol of that vessel in enemy Japanese-controlled water. Alert and aggressive as he navigated dangerous seas in search of Japanese shipping, Lieutenant Commander Clementson conducted bold attacks against the enemy and, maintaining a high standard of efficiency throughout this important patrol, succeeded in sinking three vessels totaling over 20,000 tons and in damaging another ship of 5, 000 tons… (He) inspired confidence and maximum efforts among the officers and men of his submarine, inflicting heavy losses upon the enemy and bringing his ship to port undamaged despite intensive hostile countermeasure…”

Bronze Star Medal: “For distinguishing himself by heroic and meritorious conduct as Commanding Officer of the USS Blueback during her Third War Patrol in the Java Sea from 12 May to 20 July 1945. His courage and skill during six gun attacks and five torpedo attacks resulted in severe destruction to the enemy. Twice, in the face concentrated gunfire from the enemy, he continued daring gun battles until extensive damage was inflicted upon his assailants. After a daring torpedo attack which resulted in one hit, Blueback was forces to evade a close depth charging by two escorts and to evade two erratic torpedoes making circular runs. His bold attacks resulted in sinking one minesweeper, on sub chaser and one three other ships for a total of 1,000 tone, and damaging three sub chasers and one freighters totaling 4,700 tons.  Two valuable special missions were also accomplished, consisting in the landing of intelligence parties and equipment deep in enemy territory…”

From November 1945 until October 1947 he was assisted to the US Naval Underwater Sound Laboratory, Fort Trumbull, New London, Connecticut, as Commanding Officer, with additional duty as Director from October 6, 1946. For a year thereafter he was on board the USS Capitaine (SS-336) while serving on the Staff of Commander Submarine Squadron Seven, and from November 1948 until March 1949 he served as Executive Officer of the USS Topeka (CL-67). After brief service as Executive Officer and Maintenance Officer for Submarine Administration, Mare Island, California, and Mare Island Group, Pacific Fleet, at the Mare Island Naval Shipyard, he had successive service as Commanding Officer of Sub-Group Two and Sub-Group One of the Mare Island Group, Pacific Reserve Fleet.

In July 1952 he was ordered to sea as Commanding Officer of the USS Vesuvius (AE-15), and in January 1954 was ordered detached to the Navy Department, Washington, DC, for duty as Fleet Reserve Coordinator, Fleet Development and Maintenance Division of the Officer of the Chief of Naval Operations. On July 9, 1957, he was ordered to duty as Chief of Staff and Aide to the Commander Pacific Reserve Fleet, and on September 23, the same year he was transferred to the Staff of Commander Western Sea Frontier.