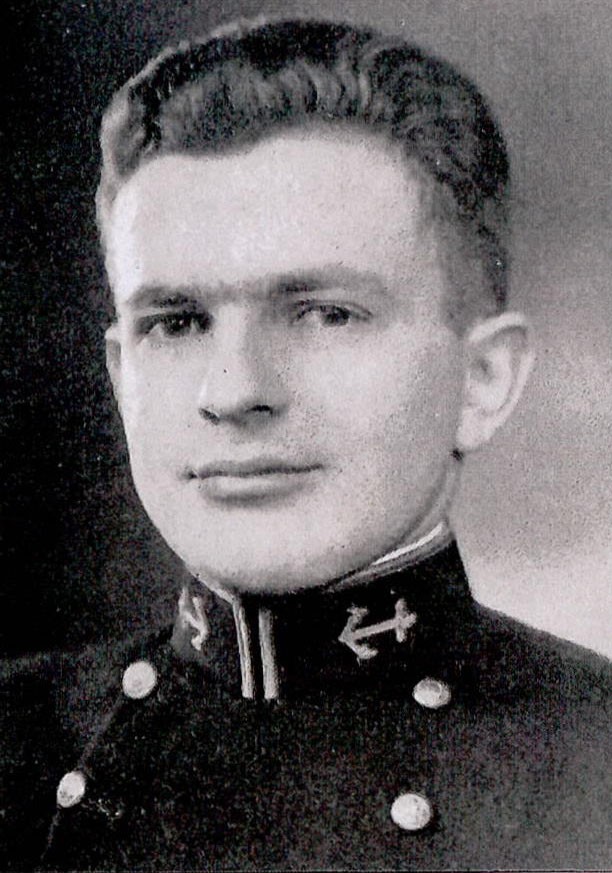 Carter Lowe Bennett was born in Nashville, Tennessee, on August 8, 1909, son of Robert Adams Bennett and Mrs. Susan Penn Lowe Bennett, both now deceased. He attended Hume Fogg High School in Nashville and had nineteen months’ enlisted service in the Navy before entering the US Naval Academy from Tennessee on July 5, 1929. As a Midshipman he participated in wrestling and lacrosse, and was a member of the Lucky Bag Staff, the Reception Committee and the Quarterdeck Society. Graduated with the Class of 1933-A and commissioned Ensign on June 1, 1933, he subsequently advanced in rank to that of Captain, to date from September 1, 1951.

Upon graduation from the Naval Academy in June 1933, he was assigned to USS Trenton, and served on board that cruiser, flagship of Commander Cruisers, Battle Force, and Special Service Squadron, until May 1935. He then had instruction in submarines at the Submarine School, New London, Connecticut, and in January 1936 reported to USS S-45, at Pearl Harbor. Going with the S-45 to Coco Solo, Canal Zone, in March 1936, he was serving as her Torpedo and Gunnery Officer when she won the Marjorie Sterrett Prize and First Prize money for the highest torpedo score of any submarine during the gunnery year 1936-1937, and Second Prize money the next year.

In May 1938 he assisted in fitting out USS Sturgeon at Mare Island, California, and served on board that submarine until June 1930. he then returned to Annapolis for instruction in Ordnance Engineering at the Naval Postgraduate School, continuing the course in the Bureau of Ordnance, Navy Department, Washington, DC, and for two years under Dr. C. S. Draper at the Massachusetts Institute of Technology, Cambridge, Massachusetts, from which he received the degree of Master of Science in May 1942.

During World War II, from June 1942 to May 1945, he participated in nine successful submarine War Patrols, the first while he was Executive Officer and Navigator of USS Cuttlefish from July until October 1942. He was awarded the Silver Star Medal for “extremely gallant and intrepid conduct (in that capacity) during a highly successful and aggressive submarine war patrol in enemy controlled waters resulted in the sinking of 29,600 tons of enemy shipping…”

He served from October 1942 until May 1943 as Executive Officer and Navigator of USS Sun Fish, and for outstanding service in operations against the enemy “during the Second War Patrol of that submarine in the East China Sea Area from February 4 to April 3, 1943…” he received a Letter of Commendation, with Ribbon and Combat “V,” from the Commander in Chief, US Pacific Fleet. During the next two year he successively commanded USS Porpoise, USS Permit and USS Sea Owl, and for heroism during that period was awarded a Gold Star in lieu of the second Silver Star Medal; the Bronze Star Medal with Combat “V”; the Navy Cross and Gold Star in lieu of a second Navy Cross; and the Legion of Merit with Combat “V.” The citations follow, in part:

Gold Star in lieu of second Silver Star Medal: “For conspicuous gallantry and intrepidity in action…in enemy Japanese controlled waters. Skillfully maneuvering his ship into striking position, (he) attacked the enemy with aggressive determination and outstanding courage and succeeded in sinking or damaging an important amount of Japanese shipping…”

Bronze Star Medal: “For meritorious service as Commanding Officer of the USS Permit during the Eleventh War Patrol of that vessel in enemy Japanese-controlled waters from January 2 to March 18, 1944…launched torpedo attacks to damage a cruiser of over 9,000 tons and, employing effective evasive tactics during severe counterattacks, succeeded in returning his ship safely to port…”

Navy Cross: “For extraordinary heroism and courageous devotion to duty as Commanding Officer of a United States submarine on patrol in enemy-controlled waters…(He) launched repeated, daring attacks against hostile forces and…succeeded in sinking or damaging an important amount of enemy shipping…”

Gold Star in lieu of the Second Navy Cross: “…As Commanding Officer of the USS Sea Owl, during her First War Patrol in the Northeastern Part of the East China Sea from November 19, 1944, to January 15, 1945…Conducting five successful torpedo attacks against Japanese anti-submarine vessels despite shallow waters and heavy enemy air activity, Commander Bennett contributed materially to the success of his ship in sinking a 1,300-ton Japanese destroyer and a 300-ton patrol craft, and…avoided intense enemy anti-submarine measures…”

Legion of Merit: “For exceptionally meritorious conduct…as Commanding Officer of the USS Sea Owl, during the Second War Patrol of that vessel in enemy controlled waters, February 11 to April 21, 1945…(He) persistently continued his search for enemy vessels, and after locating an enemy ship (submarine) ably launched a smashing attack which resulted in its complete destruction…”

Captain Bennett is also entitled to the Ribbon for, and a facsimile of the Navy Unit Commendation awarded the USS Permit “For outstanding heroism in action against enemy Japanese shipping and combatant units during her Tenth War Patrol in the Central Pacific Area from August 23, to September 24, 1943…”

Attached to the Submarine Training Command, Pacific Fleet, as Training Officer during the last four months of the war, he served from October 1945 until November 1947 as Research Officer at the Naval Torpedo Station, Newport, Rhode Island. A year’s assignment as Torpedo and Gunnery Officer on the Staff of Commander Submarines, Atlantic Fleet, Headquarters in New London, preceded command of Submarine Division 22, based at New London. He then reported to the Navy Department, Washington, DC, where he headed the Torpedo Procurement Branch from February 1950 until August 1952, and for nine months thereafter he was a student as the Industrial College of the Armed Forces, Washington, DC.

In May 1953 he assumed command of USS Bushnell (AS-15) and during the next year had additional duty as Chief Staff Officer to Commander Submarine Squadron 12. Hw next served as Commander Submarine Squadron 4, and reported in August of 1955 as Officer-in-Charge of Ordnance Engineering at the US Naval Postgraduate School, in Monterey, California. He was detached in September 1958 to assume command of the heavy cruiser, USS Saint Paul (CA-73), and commanded that cruiser, Flagship of the Commander SEVENTH Fleet, until November 1959. In December of that year, he became Commanding Officer of the Naval Ordnance Missile Test Facility, White Sands (New Mexico) Missile Range.