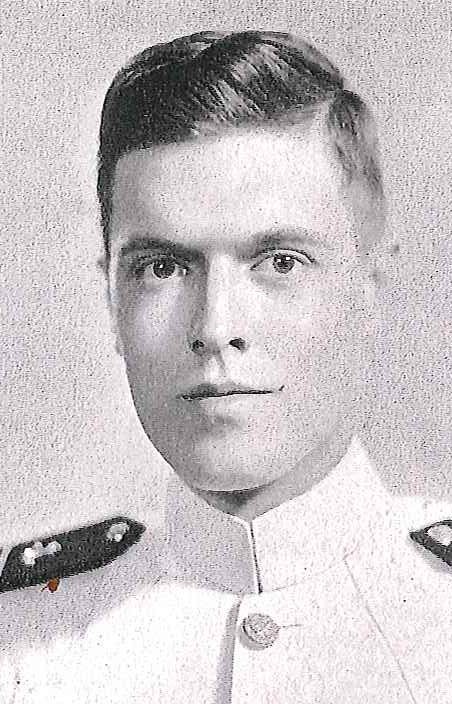 David Harrington Bagley, born in Raleigh, North Carolina, on December 7, 1920, is the son of Mrs. David W. Bagley and the late Admiral Bagley, USN.  He graduated from the Naval Academy with the Class of 1944 on June 9, 1943.

Following graduation from the Naval Academy, he reported on board USS Ringgold (DD-500) for duty.  He served in that destroyer during the remainder of World War II, participating in the 1943-44 Pacific operations against Gilbert Islands, Marshall Islands, Hollandia, Western New Guinea, Mariana Islands, Leyte, Iwo Jima, Okinawa Gunto and the THIRD Fleet operations against Japan.

He reported for duty in USS Forrest Royal (DD-872) as Gunnery Officer upon her commissioning on June 28, 1946.  From February 1947 to March 1948, he served as Executive Officer and Navigator of USS Gunason (DE-795).  He was on the Staff of Commander Destroyer Force and Cruiser-Destroyer Force, US Pacific Fleet, during the period 1948-1950 and reported in July 1950 as Operations Officer for Commander Destroyer Squadron SEVEN.  In that capacity, he participated in the Korean conflict.

Assigned in August 1951 to the Executive Department at the Naval Academy, he remained there until July 1953, after which he attended the Command and Staff Course at the Naval War College, Newport, Rhode Island.  In July 1954, he reported as Navigator on board USS Manchester (CL-83) and in April 1956 commenced duty as Assistant Head of the Pacific-Far East Branch, Politico-Military Policy Division, Office of the Chief of Naval Operations.  He assumed command of USS Henderson (DD-785) in April 1958 and in August 1959 returned to the Naval War College as a student in the Naval Warfare Course.  Ordered to the Bethlehem Shipbuilding Company, Quincy, Massachusetts, he had duty in connection with fitting out of USS Luce (DLG-7) and became Commanding Officer of that vessel upon her commissioning May 20, 1961.  During his two years in command, Luce operated with the SECOND and SIXTH Fleets.

From May to August 1963, he served in the Strategic Plans Division, Office of the Chief of Naval Operations, after which he was assigned to the Office of the Assistant Secretary Defense (International Security Affairs).  In May 1964, he became Executive Assistant and Naval Aide to the Under Secretary of the Navy and for “exceptionally meritorious service…” in that capacity was awarded the Legion of Merit.

In October 1966, he assumed command of USS Oklahoma City (CLG-5) at Yokosuka, Japan, and participated in SEVENTH Fleet combat operations in the Vietnam area before the ship returned to the West Coast.  For service as Commanding Officer of USS Oklahoma City, he was awarded a Gold Star in lieu of a second Legion of Merit.  Selected for promotion to flag rank in June 1968, he assumed the rank of Rear Admiral and became Commander Cruiser-Destroyer Flotilla NINE in July 1968.  In October of that year, Rear Admiral Bagley assumed additional duty as Commander Cruiser-Destroyer Group, SEVENTH Fleet and, in that capacity, participated in SEVENTH Fleet combat operations until early 1969.  For this later duty, he was awarded a Gold Star (with Combat “V”), in lieu of a third Legion of Merit.

Relieved as Commander Cruiser-Destroyer Flotilla NINE in August 1969, Admiral Bagley reported for duty in the Office of the Joint Chiefs of Staff.  He served first as the Deputy Chairman, Chairman, Joint Chiefs of Staff, Special studies Group and later as Chief of the Studies, Analysis and Gaming Agency.  For this latter duty, he was awarded a Gold Star in Lieu of a fourth Legion of Merit.

In September 1970, Rear Admiral Bagley reported to the newly created double-batted position of Assistant Deputy Chief of Naval Operations for Personal Services and Assistant Chief of Naval Personnel (Personal Affairs).  In this latter position, he served in the unique role of the navy’s Ombudsman, providing a single contact point between the top management echelons and all Navymen and their dependents.

On 8 April 1974, Vice Admiral Bagley was awarded the Distinguished Service Medal by the Secretary of the Navy, the Honorable John W. Warner, for “exceptionally meritorious service to the Government of the United States in duties of great responsibility…” for the period from February 1972 through March 1974 as Deputy Chief of Naval Operations (Manpower) and Chief of Naval Personnel.