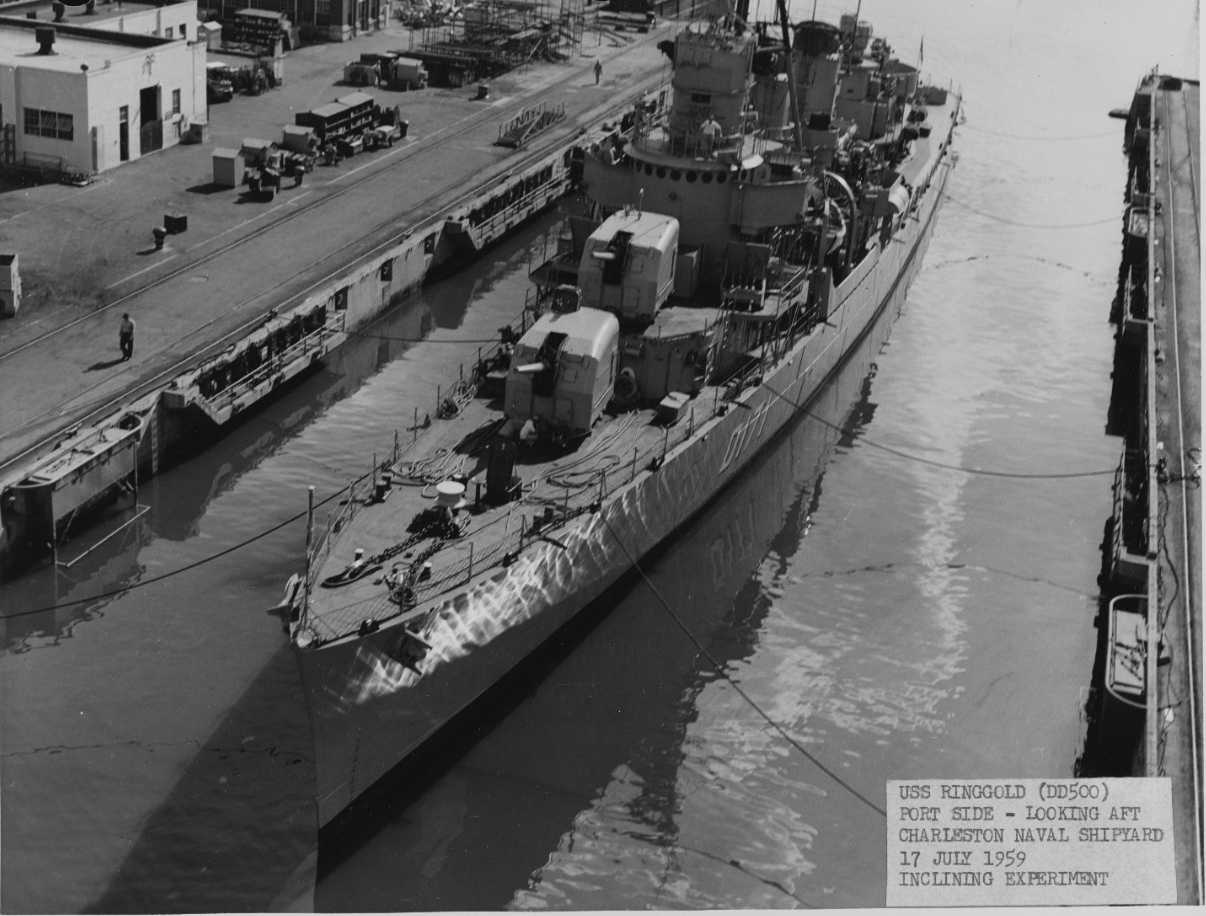 Rear Adm. Cadwallader Ringgold was born in Washington County, Md., 20 August 1802, and entered the U.S. Navy in 1819. He commanded the schooner Weazel in action against West Indies pirates during the late 1820s and later served on board Vandalia in the Pacific and Adams in the Mediterranean. During 1838-42, he participated in the Wilkes Expedition in the Pacific, commanding Porpoise from 1840. Inactive in the later 1850s, he returned to the fleet during the Civil War. While in command of the frigate Sabine he effected the rescue of a battalion of Marines whose transport steamer had gone inshore and also of the ship of the line Vermont which had lost her rudder in a storm. Promoted to commodore in 1862, he was placed on the rear admiral (retired) list in 1866. Rear Admiral Ringgold died at New York 29 April 1867. 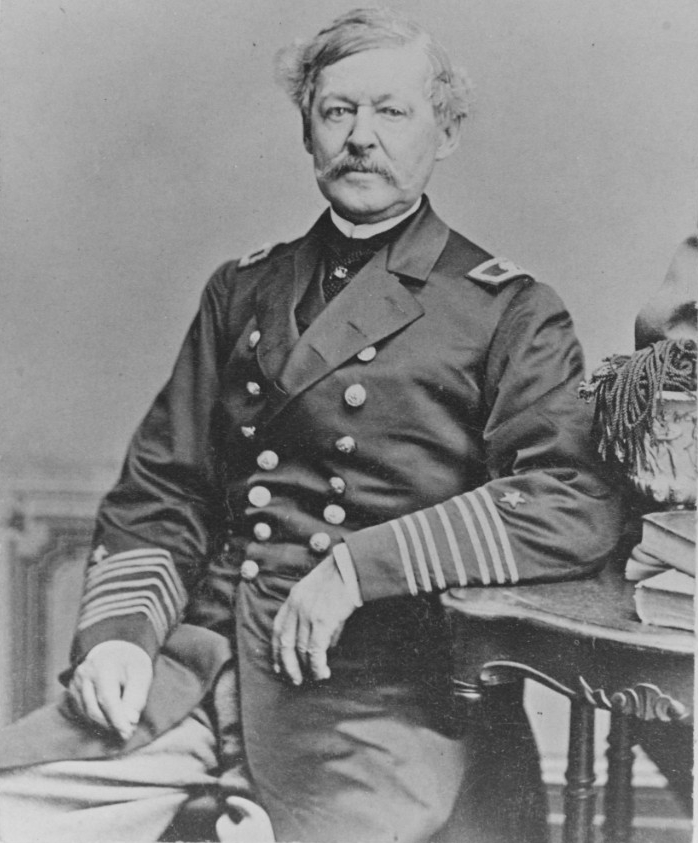 Shakedown, which took Ringgold from the Brooklyn Navy Yard to Guantanamo Bay, Cuba, and back, extended through 18 February. Additional training maneuvers kept her operating in the vicinity of Trinidad until mid-July. Departing New York en route to the Pacific 21 July, she transited the Panama Canal on the 27th and reported to Commander-in-Chief, Pacific Fleet, at Pearl Harbor, where she hoisted the pennant of Commander, Destroyer Division 50.

After several weeks of training, Ringgold joined a fast carrier task force built around Yorktown (CV-10), Essex (CV-9), and Independence (CVL-22). The force worked over Marcus Island 1 September 1943 and then moved on to conduct a raid in the Gilberts. The carrier planes conducted seven strikes 18-19 September on Tarawa and Makin. A Japanese diarist recorded that Tarawa "is a sea of flames;" nine parked planes and five vessels were destroyed. Most importantly, Lexington's (CV-16) planes returned with a set of low oblique photos of the lagoon side of Betio, and these proved to be most useful in planning the assault on Tarawa.

The next target was Tarawa, taken by the Southern Attack Force commanded by Rear Adm. Harry W. Hill in Maryland (BB-46). His ships transported the tough 2d Marine Division, all of whose components had fought on Guadalcanal. Destroyers Ringgold and Dashiell (DD-659) were scheduled for an early entrance into the lagoon 20 November. Just before sundown on the 19th, Ringgold thrust ahead of the main body of the attack force to secure a radar fix on a turning point just north of Mavana.

Charts of the area, however, were inaccurate. On several, Betio was oriented incorrectly. Fortunately, the submarine Nautilus (SS-168) had reconnoitered the area and had reported the error, and thus a new approach chart was improvised on board Maryland. Accurate radar fixes were thus possible.

Unfortunately, Nautilus' excellent reconnaissance work was ill-rewarded. At 2200, as Ringgold and Santa Fe (CL-60) pushed ahead of the attack force, they picked up a radar contact. Word had been passed to watch for the submarine, but it was believed that she had moved westward that afternoon to rescue a downed flier, and that she would submerge once she encountered friendly forces.

But Nautilus, being near a reef, did not submerge. Admiral Hill, anxious to avoid any encounters with possible Japanese patrols, gave the order to take the contact under fire. Ringgold's first salvo struck the base of the sub's conning tower. Although it ruptured her main induction valve, it did not explode. Nautilus submerged in "dire circumstances," but her damage control people worked both well and fast, so that she was able to make it to Abemama and complete her mission.

Shortly after 0500 counterbattery fire commenced, and at 0622 came the scheduled naval bombardment, which resulted in a systematic going-over for Betio. Minesweepers Pursuit (AM-108) and Requisite (AM-109), under cover of a smoke screen, swept a channel from the transport area into the lagoon during the bombardment, and they used their own guns to bark replies to Japanese shore batteries.

Then, while Pursuit placed marked buoys, Requisite led both Ringgold and Dashiell into the lagoon. A gallant sight they were as, shells falling all around them, they sped into the lagoon. Ringgold took two hits, both duds, although one managed to knock out her port engine. Her Chief Engineer, Lt. Comdr. Wayne A. Parker, is said to have imitated the legendary Dutch boy by plugging a hole with his body while emergency repairs were made.

Larger craft could not yet venture into the lagoon, and so this bold quartet provided all the frontal fire that the beach defenses received, firing in so lusty a fashion that additional ammunition had to be lightered in to them before the day ended. Of the 5,000 men ashore by the end of the-day, nearly 1,500 had been killed or wounded. What most helped these Marines throughout that gruesome day was the presence of destroyers Ringgold and Dashiell, relieved by Frazier (DD-607) and Anderson (DD-411). They provided close on-call gunfire support, while carrier aircraft bombed and strafed Japanese positions almost continuously until sunset. But the "air support provided at Tarawa was slight in strength and elementary in technique compared with what was done 18 months later at Okinawa."

As the sun set, all combatants - except three destroyers - and transports withdrew to offshore areas for protection against air and submarine attack. The transports returned at 2140. Ringgold anchored inside the lagoon, Anderson cruised the southern shore, and Frazier was off the butt end of the island to provide call fire through the night.

The Americans might well have been swept into the sea that night, if the Japanese had been able to mount a vigorous counterattack. But Rear Adm. Keiji Shibasaki, the Atoll Commander, could not counterattack. Half of his 4,500 men were already dead, and his communications had been broken by naval gunfire. He lacked control over units outside his command post, and the only troops that could launch such an attack were on the so-called "musket barrel," which was under continued bombardment from the destroyers. By 27 November 1943, both Tarawa and Abemama were secured.

In June Ringgold took part in the Marianas operations. During the invasion of Guam she served as Landing Craft Control Vessel and provided gunfire support. During the initial landing, she dispatched 23 waves of landing craft to the beach. Next came the invasion of Moratai Island [sic; Morotai Island], the Northern Moluccas, where Ringgold again provided gunfire support.

On 20 October 1944 American forces returned to the Philippines, and Ringgold again furnished fire support, this time for the landings on Panaon Island off southern Leyte. Two days later, she was ordered to Mare Island, Calif., for overhaul.

Early in February 1945, Ringgold joined Vice Admiral Mitscher's famed Task Force 58 for the first carrier strikes against the Japanese mainland and Okinawa in support of the Iwo Jima operation. Under cover of a weather front, the force launched its air groups at dawn, 16 February, 120 miles from target. Attacks against enemy air power were pressed into the heart of the Japanese homeland far into the next day. In the course of this 2-day attack, the Japanese lost 416 planes in the air, 354 more on the ground and one escort carrier.

After repairs at Ulithi and Pearl Harbor, Ringgold rejoined the Fast Carrier Task Force in support of the Okinawa Operation, joining up 4 June 1945. Upon completion of this task, the force retired to San Pedro Bay, Leyte Gulf, the Philippines, arriving 13 June.

On 1 July the ship again put to sea, this time with Admiral Halsey's 3d Fleet Fast Carrier Task Force for strikes against the Japanese homeland. On the night of 15-16 July, with DesRon 25 and CruDiv 17, Ringgold participated in an antishipping sweep 6 miles off the northern coast of Honshu, Japan. Again, on the night of 30 July, she participated in an antishipping sweep in Suruga Wan and bombarded the town of Shimizu, Honshu, Japan.

Rejoining Task Force 38 the 31st of July, Ringgold continued coastal operations with that force until the cease fire. Ordered to escort Antietam (CV-36) to Apra Harbor, Guam, 22 August, she arrived there 4 days later and underwent repairs. Steaming to Okinawa 16 September, Ringgold took on 83 passengers for Pearl Harbor, and then proceeded to the east coast of the United States.

Decommissioning 23 March 1946, she was placed in the Atlantic Reserve Fleet at Charleston, S.C., where she remained into 1959. Designated for transfer to the Federal Republic of Germany under the military assistance program, she underwent modernization and outfitting at the Charleston Naval Shipyard. Formally transferred to the German Navy 14 July 1959, she was redesignated Z-2 and served until transferred to Greece in September 1981 for spare parts use.