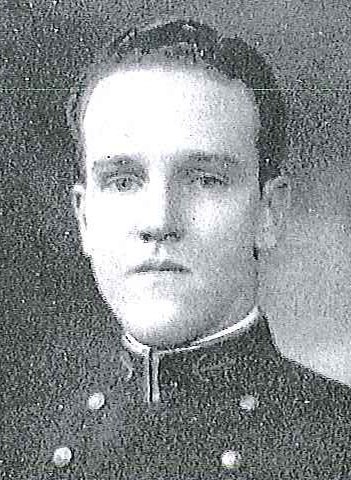 Lieutenant Commander Armstrong was born October 6, 1907, in Flemingsburg, Kentucky, the son of John Hord Armstrong and Mrs. (Elizabeth Anderson) Armstrong.  He attended public schools there and Marion Institute, Marion, Alabama, before his appointment to the US Naval Academy, Annapolis, Maryland, from the Ninth Kentucky District.  He was graduated and commissioned Ensign with the Class of 1930.  The grade of Lieutenant Commander was attained on June 15, 1942, less than two months before he was officially reported missing when the ship in which he was serving (USS Jarvis) was lost in the Pacific combat area early in World War II.

After graduation from the Naval Academy, Lieutenant Commander Armstrong spent two years in USS Memphis, including service in Nicaragua and Honduras.  In June 1932, he was ordered to Asiatic Station, and assigned duty with Destroyer Squadron FIVE.  In that assignment, he served as Engineer Officer aboard USS Edsall during the Yangtze Campaign.  Returning to the United States in January 1935, he reported to the Twelfth Naval District, San Francisco, California, and was assigned first to USS Blakeley, serving six months and later USS Pensacola, in which he had duty for a year ending in June 1937.

Captain Armstrong returned to Annapolis, Maryland, for instruction at the Postgraduate School, and completing the course in July 1938, he reported to the Office of the Chief of Naval Operations, Navy Department, Washington, DC.  He had duty there until April 1939, when he was assigned to Cruiser Division FOUR, for duty as Aide and Flag Lieutenant on the staff of the Commander.  Detached in February 1941, he was given similar duty, with Cruisers Scouting Force, serving until December 31, 1941.

After the outbreak of hostilities with Japan, Lieutenant Commander Armstrong was ordered, on December 31, 1941, to USS Jarvis, for duty as Executive Officer.  That destroyer was engaged in operations against the enemy in the Solomon Islands area and while proceeding from Guadalcanal to Noumea, New Caledonia, was sunk by enemy air attack on August 9, 1942.  Lieutenant Commander Armstrong, was officially reported missing as of that date.  In compliance with Public Law 490, he was later officially presumed dead as of July 12, 1945.

Lieutenant Commander Armstrong was posthumously awarded the Purple Heart Medal.  He had the Yangtze Service Medal, and is entitled to the American Defense Service Medal, Fleet Clasp; the Asiatic-Pacific Campaign Medal and the World War II Victory Medal.