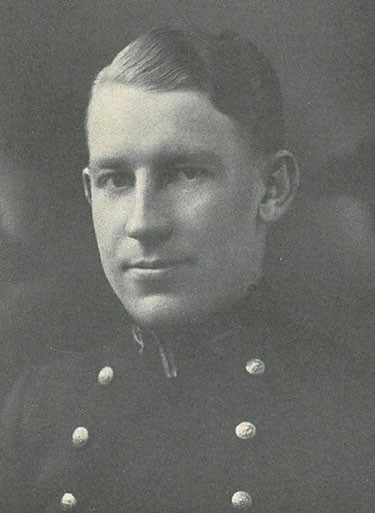 Gerald Dale Zurmuehlen was born on 11 February 1903, in Council Bluffs, Iowa, son of Frank S. and Mary Dale Zurmuehlen. He attended Abraham Lincoln High School in his native city before his appointment to the US Naval Academy, Annapolis, Maryland, from Iowa in 1922. While a Midshipman he was a member of the Lacross Squad. Graduated and commissioned Ensign on 3 June 1926, he subsequently attained the rank of Captain, to date from 1 August 1943. On 30 June 1956 he was transferred to the Retired List of the US Navy, and was advanced to the rank of Rear Admiral on the basis of combat awards.

Following graduation from the Naval Academy, he remained there for the summer course in aviation, before reporting in September 1926 to USS Raleigh, operating in the Nicaraguan Area with Light Cruiser Divisions 3 and 2, Scouting Fleet. Detached in October 1927, he served in USS Vega, a unit of Training Squadron ONE, Base Force, and in January 1928 was transferred to USS Moody of Division 30, Destroyer Squadrons Battle Fleet. Upon the decommissioning of Moody, he was assigned in July 1930 to USS Trevor, of Destroyer Division 15, and Division 10, successively.

In June 1931 he joined USS Altair, tender for Destroyers, Battle Force, and a year later transferred to USS Teal, tender for Carrier Division ONE, Scouting Force. When detached from Teal in May 1933, he returned to the United States for instruction in general line at the Postgraduate School, Annapolis. Completing the course in June 1934, he had lighter-than-air training at the Naval Air Station, Lakehurst, New Jersey, which included service with the Germans in the GRAF ZEPPELIN and the HINDENBERG, and making two trips to Frankfort, German, and return, in the latter dirigible. He was designated Naval Aviator (lta) on 21 October 1936.

Assigned next to the staff of Commander Cruiser Division 8, as Aide and Flag Lieutenant, he was transferred for duty in the same capacity on the staff of Commander Cruiser Division 7, and attached to the flagship, USS San Francisco, from January 1937 until June 1938. During the next year he served in the USS Tennessee, flagship of Commander Battleship Division 2, Battle Force, and in May 1939 he returned to the Naval Air Station, Lakehurst, for duty as Flight Officer and Engineer.

Detached from Lakehurst in March 1941, he served from April of that year until July 1942 as Commanding Officer of USS Kilty (DD 137), engaged in training operations and escort of convoy duty on the West Coast. He was briefly assigned to the Naval Air Station, Santa Ana, California, after which he reported as Executive Officer of the Naval Air Station, Richmond, Florida. During October 1942 he assisted in fitting out Airship Patrol Squadron 21, and assumed command when commissioned. In February 1943 he was transferred to Airship Patrol Squadron 51, which he commanded from its commissioning, 10 February 1943, until July of that year, during which time that squadron participated in operations in the Caribbean Area.

A Letter of Commendation from the Secretary of the Navy, with Ribbon authorized, commended his “exceptionally meritorious conduct …as Commander Blimp Squadron FIFTY-ONE from 10 February 1943… to 15 June 1943, during which period it became the first US Navy airship patrol squadron to establish and operate from Headquarters Advance Bases outside the continental United States…”

From July 1943 to January 1944 he commanded Airship Headquarters Squadron FOUR in Brazil then returned to the Naval Air Station, Santa Ana, California this time for duty in command. Between June and August 1944 he was assigned to the Amphibious Training Command and following four months’ duty as Commander LCI (L) Flotilla 27, he served on the staff of Commander Seventh Amphibious Force. For meritorious service in that capacity, he was awarded the Bronze Star Medal, with Combat “V”, and cited as follows:

“Participating in the assault landings at Lingayen, (he) aided in the coordination of shipping in the forward area for the initial assaults on enemy-controlled positions extending from Luzon through the Central and Southern Philippines and for the resupply echelons in support of these operations. As Representative of Commander SEVENTH Fleet, at Malabang, Mindoro, he aided in the maintenance and logistic support of ships engaged in operations in the Subic Archipelago and Borneo…”

In August 1945 he reported as Chief Staff Officer to Commander Administrative Command, Amphibious Forces, Pacific Fleet (Philippines), and in November joined the staff of Commander Amphibious Group THREE as Chief of Staff and Aide. He was awarded a Letter of Commendation, with Ribbon, by the War Department, as follows: “AS Commander Task Force 78, you successfully accomplished your duties at all times. You assisted and advised the operational control of US Naval Shipping used in the waterlift of the Chinese new 1st, 60th, and 93rd Armies from Kowloon, China, and also worked jointly with G-3 US Forces, China Theater, in the repatriation of Japanese from that port. An especial commendation is warranted…”

In August 1946 he assumed command of USS Kennebec (AO 36), and in April 1947 was detached for duty on the staff of the Commander, Naval Air Reserve Training, Naval Air Station, Glenview, Illinois. From September 1947 to November 1948, he served as Inspector Instructor of Naval Reserves, Portland, Oregon, and as Commanding Officer of the Naval Reserve Training Center there. He was then designated Director of Naval Reserve, Eleventh Naval District, with Headquarters at San Diego, California. In December 1949 he assumed command of USS Union (AKA 106), and participated in the Korean Police Action Landings at Pohang, Inchon, and Wonsan in 1950.

He was awarded the Legion of Merit, with Combat “V”, and a Gold Star in lieu of the Second Bronze Star Medal, also with “V”, and citations to follow:

Legion of Merit: “For distinguishing himself as Commanding Officer of the USS UNION (AKA 106), by especially meritorious conduct during amphibious training operations in Japan and in operations against the enemy in Korea. During the period of training of Service Force and MSTS ships for amphibious warfare, he demonstrated outstanding professional ability, ingenuity and perseverance, and it was largely through his voluntary and untiring efforts that these ships were, despite the brief period available, prepared for amphibious operations in Korea. During the amphibious landing of the 1st Calvary Division at Pohang-don, Korea, 18 July 1950, and the amphibious assault against Inchon, Korea, 15 September 1950, on which occasion the 1st Marine Division was transported and landed in combat, he conducted his ship in a highly skillful and effective manner, thereby contributing to the success of the operations. . .”

Gold Star in lieu of the Second Bronze Medal: “For meritorious service as Commanding Officer of the USS UNION in action against the enemy during an amphibious assault on Inchon, Korea, from 15 to 19 September 1950. He skillfully maneuvered his ship in the restricted and hazardous waters and landed assault troops and cargo on schedule, thereby contributing directly to the success of the operation. . .”

When detached from Union in December 1950, he reported to Northwestern University, Evanston, Illinois, for duty as Professor of Naval Science, and Commanding Officer, Naval Reserve Officers Training Corps Unit there. In June 1954 he became Commanding Officer of the Naval Amphibious Base, Coronado, California, serving in that capacity until relieved of all active duty pending his retirement, effective 30 June 1956.

Rear Admiral Zurmuehlen’s wife was the former Katherine Hildreth of Colorado Springs, Colorado, and they had two children. He passed away 10 October 1965 in San Diego, California.