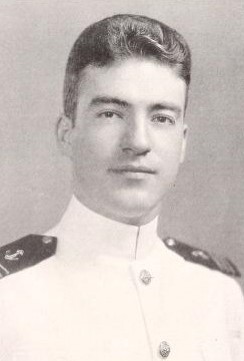 Frances John Fitzpatrick was born in Salt Lake City, Utah, on February 3, 1916, son of John F. and Margaret (Mockler) Fitzpatrick. He attended Regis High School, Denver, Colorado; Kemmerer (Wyoming) High School; and they University of Wyoming at Laramie, prior to entering the U.S Naval Academy, Annapolis, Maryland, on appointment by the Honorable Vincent Carter of Wyoming in 1935. Graduating and commissioned Ensign on June 1, 1939, he subsequently advanced in rank, attaining that Rear Admiral, to date from June 1, 1967.

Following graduation from the Naval Academy in 1939, he joined the USS Mexico (BB-40) and was serving in that battleship when the United States entered World War II, December 8, 1941. While he was on board the New Mexico, she was engaged in pre-war convoy operations in the Atlantic and subsequently participated in the early Pacific combat operations. In July he reported for instruction in naval communications at the Naval Postgraduate School, Annapolis, Maryland. Completing the course there in July 1944, he next served as Communication Officer on board the USS Alabama (BB-60), which operated as part of the Third and Fifth Fleets from the seizure of the Admiralty Islands to the strikes on the Japanese homeland, preceding the cessation of hostilities in August 1945. From November of that year until August 1946 he was Aide and Flag Secretary of the Staff of Commander Battleship Division Three, after which he had duty as Navigator and Operations Officer on board the USS Oakland (CLAA-95).

Assigned in November 1947 to the US Naval Postgraduate School, Monterey, California, he served as an Instructor in Strategy and Tactics until December 1950, then as Officer in Charge of the Indoctrination School. During the period August to October 1951 he was Prospective Commanding Officer/ Chief Staff Officer on the staff of Commander Destroyer Squadron One. In November 1951 he assumed command of the USS Arnold J. Isbell (DD-869) and for “meritorious service…( in that command) during operations against enemy aggressor forces in Korea from February 19 to June 22, 1952… “He was awarded the Bronze Star Medal with Combat “V.”

Detached from Arnold J. Isbell in August 1953, he next served as Executive Officer and Assistant Communication Officer of the US Naval Communication Station, San Diego, California. He remained there until December 1955, and the next month reported as Executive Officer of the USS Columbus (CA-74). In August 1957 he reported for instruction at the Industrial College of the Armed Forces, Washington, DC, and upon completion of the course there in July 1958, was assigned to the Office of Chief of Naval Operations Navy Department, Washington, DC, where he had duty as Assistant for Joint Chiefs of Staff Matters and in the Logistics Plans Division until July 1960. He then became Professor of Naval Reserve Officers Training Corps Unit at the University of Utah at Salt Lake City.