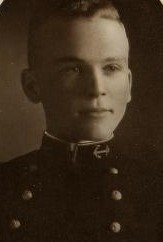 Rear Admiral Chapline, born in Red Cloud, Nebraska, September 19, 1887, was appointed to the US Naval Academy from the First District of his native State in 1905. Graduated in June 1909, he served the two years at sea then required by law before he was commissioned Ensign, June 5, 1911. Promoted to Lieutenant (junior grade), June 5, 1914, and Lieutenant, June 5, 1917, he also received temporary promotion to Lieutenant Commander during World War I, was commissioned in that rank, June 3, 1921, and subsequently was promoted as follows: Commander, July 1, 1927; Captain , December 1, 1937; Commodore, September 8, 1944; and Rear Admiral, April 3, 1945. He was transferred to the Retired of the Navy in the rank of Rear Admiral on November 1, 1946.

After graduation in June 1909, Rear Admiral Chapline served in the USS South Dakota until July 1911. He then had consecutive duty in the destroyers Hull and Paul Jones until October 1914 when he assumed command of the USS Preble. Transferred to the USS Albany in May 1916, he served as her navigator until January 1917 when he reported for duty in the Office of the Judge Advocate General, Navy Department, Washington, DC, and was serving in that assignment when the United States entered World War I the following April. Detached in September 1917 under orders to duty with the Destroyer Force based he assumed command of the USS Harvard on October 27, 1917. For his services in command of that destroyer he was awarded the Navy Cross with the following citation:

“For distinguished service in the line of his profession as Commanding Officer of the USS Harvard, engaged in the important, exacting and hazardous duty of transporting and escorting troops and supplies through waters infested with enemy submarines and mines”

Detached from command of the Harvard on November 20, 1918, nine days after the Armistice, Rear Admiral Chapline commanded the USS Fairfax for one month. In December 1918 he reported for duty as Aide on the Staff of the Commander, Squadron Five, Patrol Force, Atlantic Fleet, USS Carola, flagship, and in January 1919 was transferred to duty as Aide for Operations on the Staff of the Commander, Naval Force in France, USS Bridgeport, flagship, serving in that assignment until April 1919. He then consecutively commanded the USS Connor and the USS Bancroft until November of that year. He assumed command of the USS Reid when she was commissioned, December 3, 1919, and in February 1921 was assigned additional duty in command of Division 43.

In June 1921, he reported for duty in the Material Division, Office of the Chief of Naval Operations, Navy Department, Washington, DC. In February 1922 he was appointed Recorder of a Board which convened at the Navy Department to make recommendations as to battleships under construction to be retained and completed under the limitation of Armaments Conference. Detached from the Office of the Chief of Naval Operations in February 1924, he assisted in fitting out the USS Trenton at the William Cramp and Sons Company, Philadelphia, Pennsylvania, and served as navigator of that cruiser from her commissioning, April 19, 1924 until December 7, 1926.

Rear Admiral Chapline has duty in the Office of the Director of Reserve Personnel, Bureau of Navigation (later Bureau of Naval Personnel) Navy Department, Washington, DC, from January 1927 until June 1929. Returning to sea, he served as Executive Officer of the USS Whitney until June 1931. The following year he again had duty in the Material Division, Office of the Chief of Naval Operations, Navy Department, until May 1934. In June of that year he joined the USS Detroit, serving as Executive Officer of that cruiser until April 1936 when he again reported for duty in the Office of the Chief of Naval Operations, serving in the Fleet Maintenance Division until July 1939.

In September 1939, Rear Admiral Chapline assumed command of the USS Philadelphia. During his command, which extended to September 5, 1941, that cruiser participated in short range battle practice on the West Coast, and was engaged on patrol duty between Halifax and Bermuda prior to entry of the United States in World War II in December 1941. On September 22, 1941, he again reported to the Bureau of Navigation (later redesignated Bureau of Naval Personnel), Navy Department, Washington, DC, and was assigned duty as Director of the Naval Reserve Division. On February 3, 1942 he was transferred to duty as Director of the Fleet Maintenance Division, Office of the Chief of Naval Operations, Navy Department. For meritorious services in that assignment he was awarded the Legion of Merit with the following citation:

“For exceptionally meritorious service to the Government of the United States in a duty of great responsibility as Director of the Fleet Maintenance Division, Office of the Chief of Naval Operations, from 20 February 1942 to 31 August 1945. Displaying the utmost initiative, judgment and administrative skill, Rear Admiral Chapline coordinated with outstanding readiness the efforts of all agencies providing for the materials of the United States Fleet. Under his forceful direction, in circumstances requiring exceptional foresight, tact and ingenuity amid conflicting interests, the vessels of the United States Fleet and vessels of foreign navies were built and maintained in a high order of readiness for the demands made upon them in combat. His extraordinary performance of complex and exacting duties contributed materially to the successful prosecution of the war.”

Rear Admiral Chapline continued to serve in the Office of the Chief of Naval Operations until ordered relived of all active duty on May 15, 1946. He was transferred to the Retired List of the Navy on November 1, 1946.

In addition to the Navy Cross, and the Legion of Merit, Rear Admiral Chapline has the Mexico Service Medal (USS Paul Jones); the Victory Medal, Destroyer Clasp (USS Burrows); and is entitled to the American Defense Service Medal, Fleet Clasp (USS Philadelphia); the Asiatic-Pacific Area campaign Medal; the American Area Campaign Medal; and the World War II Victory Medal. He also was presented the Legion of Honor, Rank of Officer, by the Government of France.