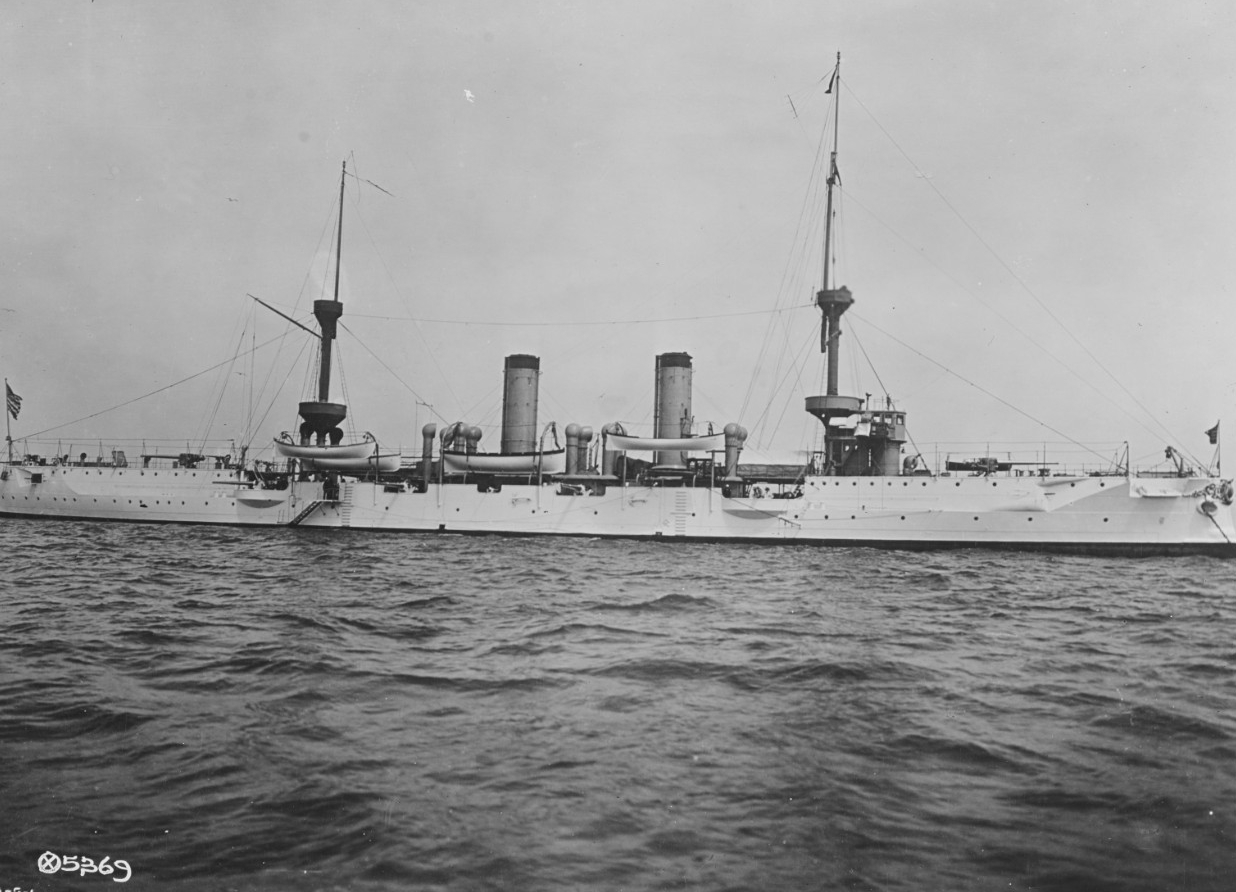 The third Albany, a protected cruiser laid down at Newcastle-on-Tyne, England, by Armstrong, Whitworth & Co. as Almirante Abreu for the Brazilian Navy, was purchased while still on the ways by the United States Navy on 16 March 1898 to prevent her being acquired by the Spanish Navy; renamed Albany; launched in February 1899; sponsored by Mrs. John C. Colwell, the wife of the American naval attache in London; and commissioned in the Tyne River, England, on 29 May 1900, Capt. Joseph E. Craig in command.

On 26 June 1900, Albany put to sea bound for service in the Philippines. Steaming via Gibraltar, the Mediterranean Sea, the Suez Canal, and the Indian Ocean, the cruiser arrived at Cavite in the Philippines on 22 November. She served with the Asiatic Fleet in the Philippines for the next seven months. During that tour of duty, the protected cruiser visited Hong Kong from 28 December 1900 to 17 February 1901 for repairs in drydock.

On 3 July 1901, she departed Cavite to return to the European Station. Retracing the path of her maiden voyage, Albany transited the Suez Canal early in September and reentered the Mediterranean on 15 September.

For the following nine months, the warship cruised the warm waters of the Mediterranean visiting ports in Greece, France, Italy, Spain, and Egypt. She entered the Atlantic on 18 June 1902 and, after stops at Cherbourg, France, and Southampton, England, rendezvoused with Illinois (Battleship No. 7), the protected cruiser Chicago, and San Francisco (Cruiser No. 5) off Galloper light vessel on 12 July. She exercised with those ships until 20 July at which time she set a course for the Baltic Sea. During her sojourn in the waters of northern Europe, she visited Stockholm, Sweden; Kronstadt, Russia; and Copenhagen, Denmark. Early in September, she exited the Baltic and, after a visit to Plymouth, England, reentered the Mediterranean on the 12th. After almost two months of duty in the "middle sea," Albany set a course for the western hemisphere early in November. She arrived in the West Indies later that month and ended the year in fleet tactical maneuvers which she concluded early in January 1903. On the 5th, the ship set a course for Boston, Mass.

After repairs at Boston and at the New York Navy Yard, Albany got underway on 15 February 1903 to return to European waters. At the end of a brief tour of duty in the Mediterranean, she transited the Suez Canal at the end of May and set a course for the Far East. She stopped for coal at Hong Kong and then joined the Asiatic Fleet at Chefoo in northern China. She spent most of the remainder of 1903 operating with that fleet in the waters of northern China, Korea, and Japan. On one occasion in mid-November, she carried the United States minister to Korea from Kobe, Japan, to Chemulpo, Korea. Upon returning to Kobe and proceeding thence to Yokohama, the protected cruiser embarked upon a voyage to Hawaii on 3 December. She arrived in Honolulu on the 16th and remained there until the 29th at which time she headed back toward the western Pacific. She made a stop at Guam in the Ladrone (now Mariana) Islands before arriving at Cavite in the Philippines on 20 January 1904. She operated in the Philippines for about a month and headed for the coast of China on 19 February. The warship reached Shanghai four days later and remained in the vicinity for a month before getting underway for the Philippines on 22 March. She laid over at Cavite from 26 March to 18 April. The cruiser made another brief voyage to Shanghai and back to the Philippines between 18 and 30 April. Following a week at Cavite, she put to sea, bound for the United States. She made stops en route at Guam and Honolulu and arrived in port at Bremerton, Wash., on 16 June. Soon thereafter, Albany was placed out of commission at the Puget Sound Navy Yard.

The protected cruiser remained inactive for almost three years. On 10 June 1907, she was placed in full commission, Comdr. Henry T. Mayo in command. Assigned to the Pacific Fleet, Albany spent the next three years cruising the western coasts of North and Central America. Her duty on the west coast of North America consisted primarily of training evolutions but also included surveillance missions along the coast of Central America in protection of United States citizens and their interests in the perennially unsettled republics there. She visited ports in Mexico, Honduras, El Salvador, and Nicaragua. The latter country proved to be her primary area of operations during the first part of 1910 when she was attached to Rear Admiral Kimball's Nicaraguan expeditionary force. She returned north to the Puget Sound Navy Yard in May to begin preparations to deploy once more to the Asiatic Fleet. On 4 August, she departed the navy yard on her way to Chinese waters. After stops at Honolulu in Hawaii and Yokohama in Japan, Albany arrived at Woosung, China, on 15 September. For almost three years, the protected cruiser plied Far Eastern waters visiting ports from the Philippines to China to Japan. 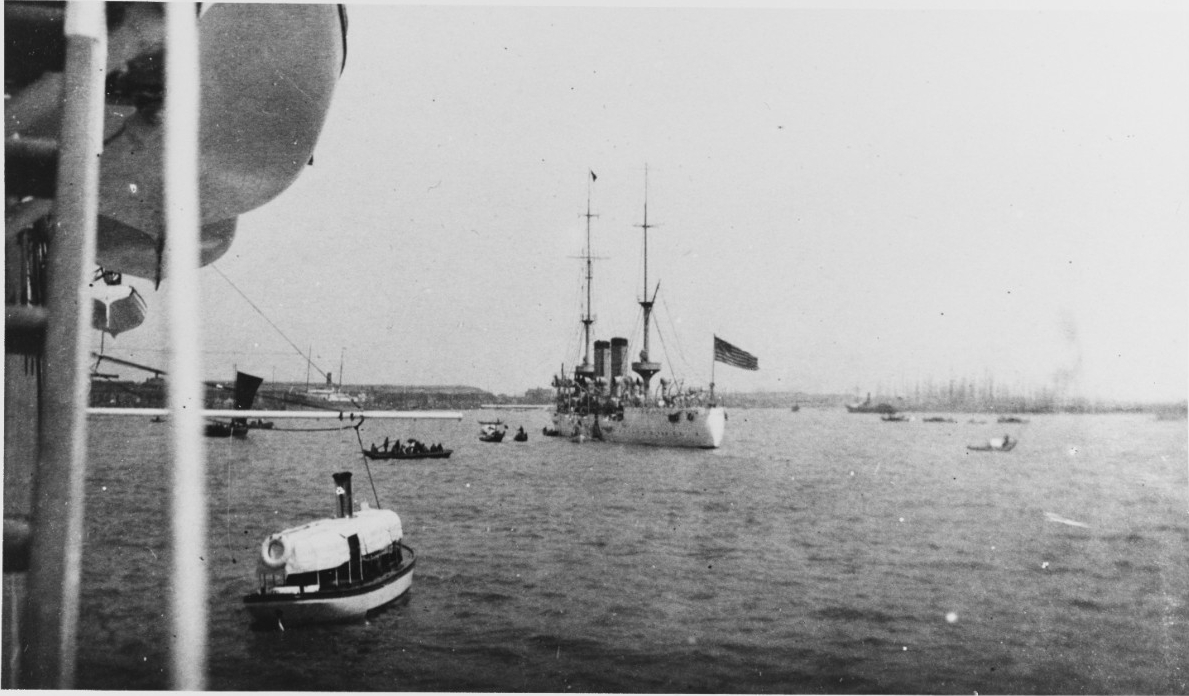 On 20 October 1913, the warship left Yokohama, bound for home. She stopped at Honolulu from 31 October to 5 November and arrived in San Francisco on 12 November. She moved north to Puget Sound at mid-month and was placed in reserve there on 23 December. Following repairs, she was recommissioned on 17 April 1914. That summer and fall, she cruised Mexican waters in the wake of the incident at Tampico and the resultant landing at Veracruz. She concluded that duty late in November and, on 4 December 1914, was placed out of commission at Bremerton, Wash., for a general overhaul. At the conclusion of those repairs late in the spring of 1915, Albany was assigned training duty with the state naval militias of Washington and Oregon. On 12 May 1916, she was returned to full commission, Lt. Comdr. Orin G. Murfin in command. Upon returning to active service, she once again headed for Mexican waters, this time as part of the United States' response to the massacre of American citizens in Columbus, N.M., perpetrated by Pancho Villa and his band of marauders.

By early 1917, Albany was operating with the Atlantic Fleet off the coast of Virginia. This change in assignment came as a result of worsening relations between the United States and the German Empire over the latter country's unrestricted submarine warfare campaign. In February and March relations deteriorated rapidly; and, early in April, the United States entered the war on the side of the Allied Powers.

On 5 July, Albany received orders to report to New York for convoy duty. She was assigned duties as flagship for Squadron 6, Patrol Force, Atlantic Fleet. As such, she carried the flag of Rear Admiral William C. Watts. For the duration of World War I, the cruiser escorted convoys of merchant ships, cargomen, and troop transports back and forth across the Atlantic. Between July 1917 and the end of the war on 11 November 1918, she shepherded 11 such convoys safely between the United States and Europe.

In 1919, Albany was once more assigned to the Asiatic Fleet. At that time, the Russian Civil War between Bolshevik and non-Bolshevik (a diverse group made up of people whose only common ground was opposition to the Bolsheviks) factions. Various Allied powers sent military contingents to several Russian ports. The United States landed troops at Vladivostok in Siberia, possibly to check Japanese pretensions in that area and to secure that port as an exit for the Czech Legion then transiting the Trans-Siberian railway. In 1919 and early 1920, Albany did several tours of duty at Vladivostok in support of American troops ashore. She also sent armed landing parties ashore on several occasions in further support of those troops and to evacuate sick and wounded men.

American troops were withdrawn in the spring of 1920, and Albany resumed normal peacetime duty with the Asiatic Fleet. That service included the usual summers in Chinese waters alternated with winters in the Philippines. On 8 August 1921, she was reclassified a light cruiser and designated CL-23. In July 1922, she departed Chinese waters for the last time and headed home. She arrived at the Mare Island Navy Yard on 6 August and was placed out of commission on 10 October 1922. She was berthed at Mare Island until 3 November 1929 when her name was struck from the Navy list. On 11 February 1930, she was sold for scrapping.

On 28 December 1940, President Franklin D. Roosevelt approved the recommendation of the name Albany for the Baltimore-class heavy cruiser CA-72; but, before the ship's construction was begun, wartime events intervened. The heavy cruiser Pittsburgh (CA-70) was renamed Canberra on 12 October 1942, to honor the Australian heavy cruiser lost during the disastrous Battle of Savo Island, and Albany was renamed Pittsburgh (q.v.) on 26 November 1942, well in advance of her keel laying which took place on 3 February 1943.