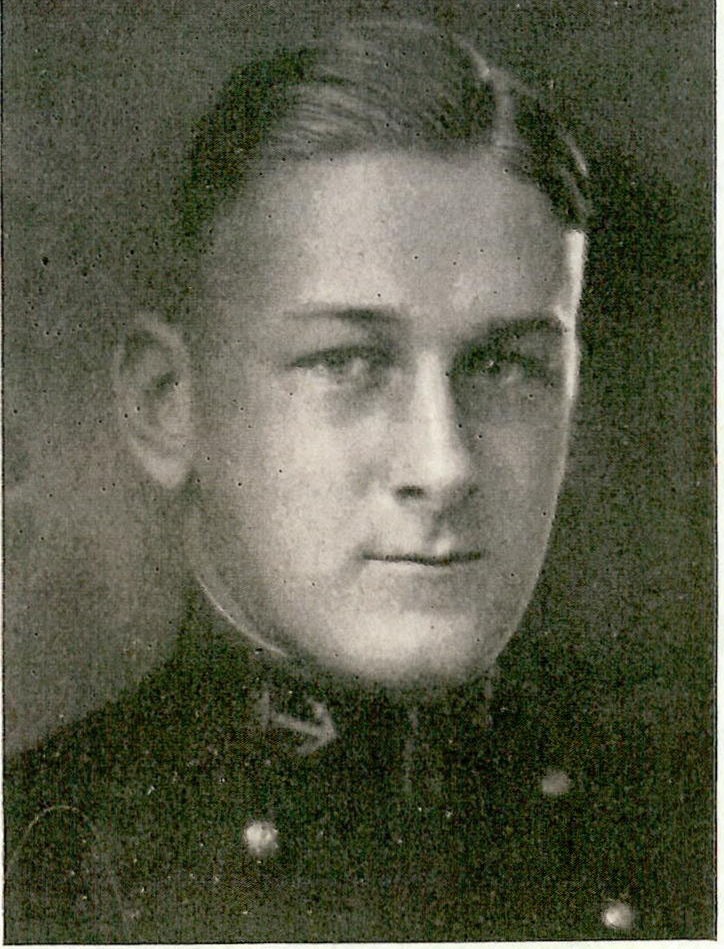 Harman Brown Bell was born in Baltimore, Maryland, on March 7, 1903, son of the late Harmon Brown and Bella Jack (Smith) Bell. He attended Gilman County School in Baltimore, and the Severn School, Severna Park, Maryland, prior to his appointment to the US Naval Academy, Annapolis, Maryland, from the State of Pennsylvania in 1921. As a Midshipman, he was a member of the plebe and varsity crew. Graduated and commissioned Ensign on June 3, 1925, he subsequently advanced in rank, attaining that of Captain, to date from July 20, 1943.

Upon graduation from the Naval Academy in 1925, he reported on board USS Concord, and in January 1926 joined the staff of Commander Destroyer Squadrons, Scouting Fleet, as Communications Watch Officer. Continuing duty afloat, he served from August 1926 until June 1927 in USS Whitney, after which he had instruction until December of that year at the Naval Torpedo School, Newport, Rhode Island. Following submarine training at the Submarine Base, New London, Connecticut, he was assigned in July 1928 to USS O-2, and in August 1929 transferred to USS S-22. In 1931 he received a commendatory letter from the Secretary of Navy for his interest and ingenuity in devising a safety interlock for the operating gear for submarine watertight doors.

For two years, May 1932-May 1934, he had duty at the Submarine Base, Pearl Harbor, Territory of Hawaii, followed by service as Navigator and Gunnery Officer of USS S-47. In January 1935, he assumed command of USS S-44 and when detached from that command in December of the same year, he was ordered to the Bureau of Construction and Repair, Navy Department, Washington, DC, where he was assigned to the Submarine Maintenance Desk.

In June 1939, he joined USS New Mexico and in September 1940 assumed command of USS Sigourney. He commanded USS Dallas from December 1940 until December 1941, which, during that period, was engaged in escort of convoy operations in the North Atlantic. Transferred to USS Sampson, he served as Commanding Officer of that destroyer until September 1943, when he became Commander Destroyer Division ONE HUNDRED FOUR. For outstanding services in the Pacific War Area from January 1942 until September 1944 he was awarded the Bronze Star Medal and a Gold Star in lieu of a Second similar award, each with Combat “V.” The citation follow in the order of the action or which cited:

Gold Star in lieu of the Second Bronze Star Medal: “For meritorious service as Commanding Officer of the USS Sampson from January 1942 to September 1943, in action against enemy Japanese forces in the Pacific War Area. As Commanding Officer of the Sampson, (he) operated with the South East Pacific Force, escorting convoys and serving on anti-submarine and anti-raider patrol. As Commander Destroyer Division ONE HUNDRED FOUR, he operated with Task Force FIFTY-EIGHT and participated in the Third Bonins Raid, the assault and capture of the Mariana and Palau Islands and the initial assault on the Philippine Islands. During these operations he directed the ships of his squadron in the performance of screening duties, bombardments, and fire support activities for our troop landings and the patrol of picket station, thereby contributing materially to our success in these areas…”

Bronze Star Medal: “For meritorious achievement while serving as Commanding Officer of Destroyer Division ONE HUNDRED FOUR, during action against enemy Japanese forces in the Central and South Pacific Areas from January through June 1944…Captain Bell expertly maintained his ships at the peak of combat efficiency throughout this prolonged period of intensive action against the enemy, contributing essentially to the success of our sustained drive against the Japanese in this vital war area…”

Detached from command of Destroyer Division ONE HUNDRED FOUR in September 1944, he had duty with Logistic Plans and the General Planning Group in the Office of the Chief of Naval Operations, Navy Department, Washington, DC, until May 1947. He next commanded Destroyer Squadron TEN and in April 1948 was assigned to the staff of Commander Naval Forces, Eastern Atlantic and Mediterranean, to serve for two months as Logistics Plans Officer. In July, he reported as Chief of Staff to Commander Amphibious Training Command, USS Atlantic Fleet, and in August 1950 became Commander Service Squadron TWO. In August 1951 he joined the staff of Commander Service Force, US Atlantic Fleet, for duty as Plans Officer and later as Chief of Staff and Aide.

Captain Bell is an honorary member of the Calphe Rowing Club, Gibralter, and a member if the Army-Navy Country Club, Arlington, Virginia. His hobbies are archery, gardening, fishing and tropical fish.