The first Dallas retained the name she carried at the time of her assignment to U.S. Navy control. The second Dallas (Destroyer No. 199) honored Alexander J. Dallas, born 15 May 1791 in Philadelphia, Pa., who entered the Navy as a midshipman on 22 November 1805. He served with distinction in the War of 1812, the operations against Algiers in 1815, and in the suppression of piracy in the West Indies. He established and commanded the Pensacola Navy Yard from 1832 to 1843. On 16 July 1835, he was ordered to additional duty in command of the West India Squadron and supported General Winfield Scott during the war with the Seminole Indians in Florida, rendering such efficient service that the government gratefully named a fort for him on the eastern coast of Florida. Commanding the Pacific Squadron, Captain Dallas died at Callao, Peru, 3 June 1844 on board the sloop Vandalia.  The third Dallas (SSN 700) was named for the city in Texas.

Dallas operated on the east coast, participating in exercises and maneuvers from her base at Charleston, S.C. She arrived at Philadelphia on 12 April 1922 and was placed out of commission there on 26 June.

Re-commissioned on 14 April 1925 Dallas served with various destroyer squadrons, serving as flagship for Squadrons 9, 7, and 1. Until 1931, she operated principally on the east coast and in the Caribbean, engaging in gunnery exercises, battle torpedo practice, maneuvers and fleet problems; participating in joint Army-Navy exercises; training members of the Naval Reserve; and serving as experimental ship at the Naval Torpedo Station, Newport, R.I.

On 9 January 1932, Dallas cleared Charleston, S.C., for the west coast, arriving at San Diego on 21 March. She operated along the west coast and in the Hawaiian Islands, conducting force practice and tactical exercises and participating in combined fleet exercises.

Dallas sailed from San Diego on 9 April 1934 for the Presidential Review of the Fleet in June 1934 at New York City, and tactical exercises on the east coast and in the Caribbean. Returning to San Diego on 9 November, Dallas continued to operate in the Pacific until 1938, cruising to Hawaii and Alaska. The destroyer thenoperated in the Canal Zone between May and November 1938, visiting ports of the Republic of Panama, rendering services to Submarine Squadron 3; and making a good-will call at Buenaventura, Colombia. On 17 November, she weighed anchor for the east coast, arriving at Philadelphia six days later. She was again placed out of commission on 23 March 1939.

With the outbreak of World War II in Europe, Dallas was recommissioned on 25 September 1939 and assigned to the Atlantic Fleet, serving as flagship for Destroyer Squadrons 41 and 30. She operated the Atlantic coast and conducted training exercises until 7 July 1941 when she got underway for Argentia, Newfoundland, arriving four days later. Between 11 July 1941 and 10 March 1942 she operated between Argentia and Halifax, escorting convoys to Reykjavik, Iceland, and Londonderry, Northern Ireland.

From 1 April 1942 to 3 October, Dallas escorted coastal shipping from New York and Norfolk to Florida, Texas, Cuba, Bermuda, and ports in the Caribbean. On 25 October 1942, she cleared Norfolk to rendezvous with Task Force 34 bound for North Africa. Dallas was to carry a U.S. Army Raider battalion, and land them up the narrow, shallow, obstructed river to take a strategic airport near Port Lyautey, French Morocco. On 10 November, she began her run up the Oued Sebou under the masterful guidance of René Malavergne, a French civilian pilot.

Under fire from artillery and small arms during the entire run, she plowed her way through mud and shallow water, narrowly missing the many sunken ships and other obstructions, and sliced through a cable crossing the river, to land her troops safely just off the airport. Her brilliant success in completing this mission with its many unexpected complications won her the Presidential Unit Citation. Malavergne, the pilot, would be the first foreign civilian to receive the Navy Cross. On 15 November, she departed the African coast for Boston, arriving there on 26 November. 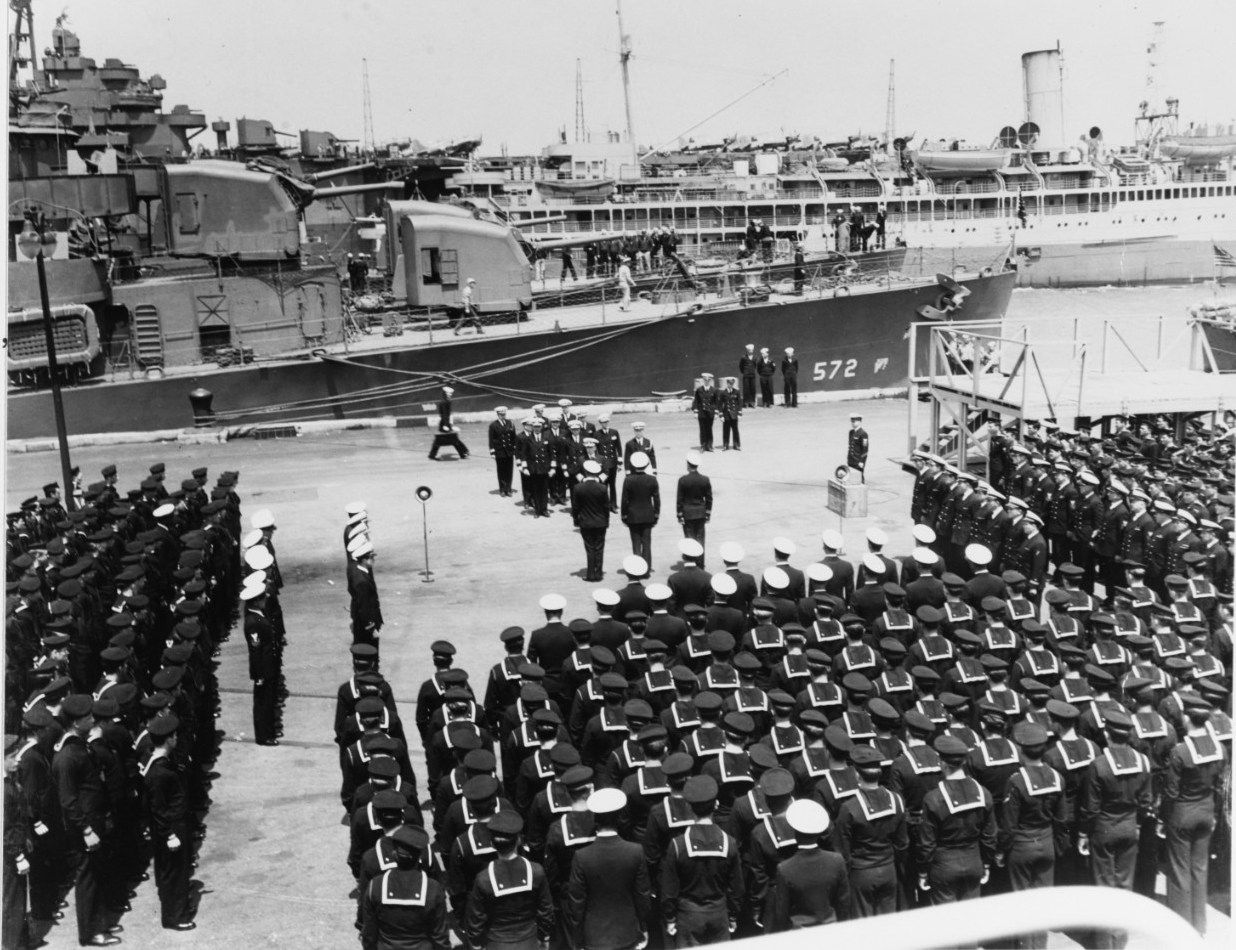 Admiral Ingersoll, Commander-in-Chief, Atlantic Fleet, presents the Presidential Unit Citation to the officers and men of destroyers Dallas (DD-199), Cole (DD-155), and Bernadou (DD-153), 4 May 1943, probably at the Norfolk Naval Base. Vice Admiral Alexander Sharp is at the left of the group behind Admiral Ingersoll. Dyson (DD-572) and Alcor (AR-10) are in the background. Courtesy of Mrs. Arthur C. Nagle. Copyright Owner: Naval History and Heritage Command. Catalog #: NH 90949.

Dallas had convoy duty between Norfolk, New York and New London, making one voyage to Gibraltar from 3 March to 14 April 1943, until 9 May when she departed Norfolk for Oran, Algeria, arriving on 23 May. She patrolled off the North African coast, then on 9 July joined TF 81 for screening duty during the invasion of Scoglitti, Sicily, from 10 to 12 July. She returned to convoy and patrol duties until 7 September when she joined the escort for a convoy bound for the invasion of the Italian mainland. Dallas screened the transport group during the landings at Salerno on 9 September, and joined a south-bound convoy two days later, rescuing two downed British airmen en route to Oran. She escorted reinforcements to Salerno, then served on escort and patrol in the Mediterranean until 11 December when she got underway for the east coast, arriving at Philadelphia on Christmas Eve.

Following a thorough overhaul at Charleston, S.C, Dallas escorted two convoys to North Africa between 23 February and 9 June 1944. On the second voyage, the escorts came under attack by enemy torpedo planes on 11 May but successfully defended the convoy; the destroyer accounted for at least one plane, and damaging others. She then served on the east coast on various training and convoy assignments. She was renamed Alexander Dallas on 31 March 1945 to avoid confusion with the cruiser Dallas (CA-140), then projected for construction, until 7 June 1945 when she reported to Philadelphia. 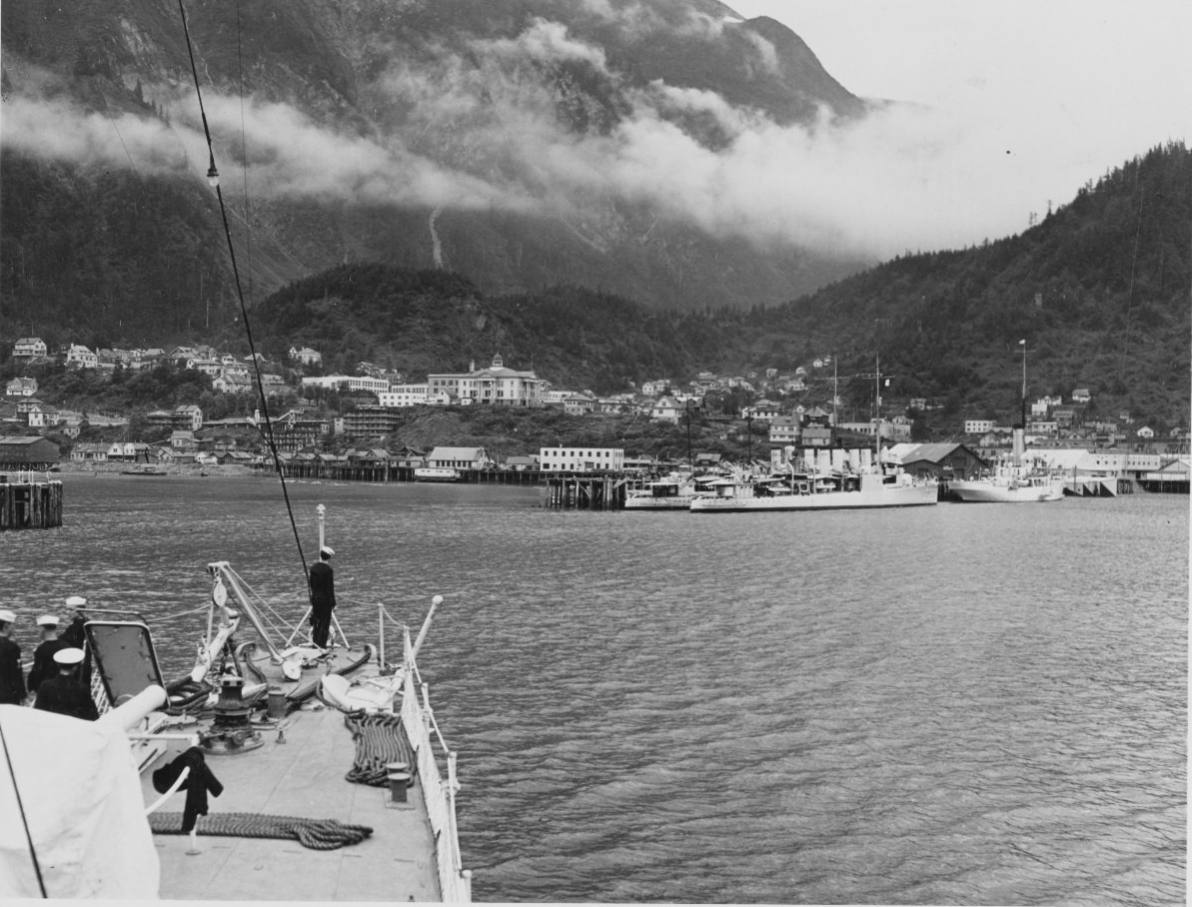 During an Alaska cruise, destroyer Dallas (DD-199) noses her bow toward the city of Juneau, the capital of Alaska, situated on Gastineau Channel with a population of about 4,500 people. Long (DD-209) and Wasmuth (DD-338) are docked in foreground, 1937. Copyright Owner: Naval History and Heritage Command. Catalog#: NH 109568.