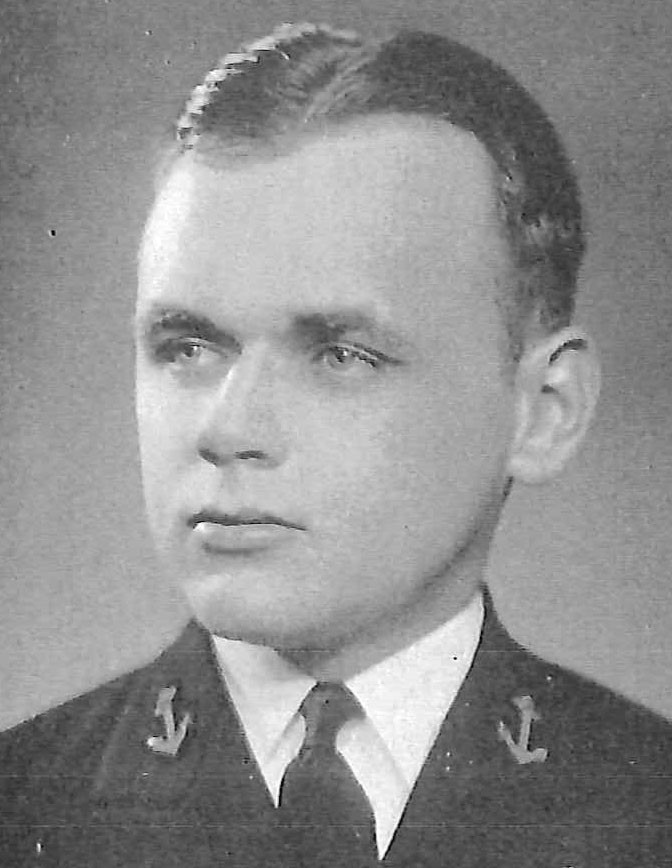 A graduate of the Naval Academy’s Class of 1935, Captain Claggett first served as junior officer in the US Navy on board the battleship Oklahoma, which evacuated refugees from Spain during the revolution of 1936. After submarine training he served as Engineer, Torpedo Officer and First Lieutenant in the submarine S-45 and Mackerel, from December 1937 until February 1942, after the outbreak of World War II.

Serving next as Gunnery and Torpedo Officer of USS Guardfish which won the Presidential Unit Citation for heroic action in the Pacific, he was personally awarded the Silver Star Medal for conspicuous gallantry during her two first war patrols in the fall of 1942. In 1943 he was Executive Officer and Navigator of USS Pargo, and was awarded a Gold Star in lieu of the Second Silver Star Medal for conspicuous gallantry during the First War Patrol of the submarine, and the Bronze Star Medal for meritorious achievement during her Second War Patrol.

He remained in the Pacific Area throughout 1944, in command of USS Dace, which was awarded the Navy Unit Commendation for her Fifth War Patrol in October of that year. Under his command, the Dace made the initial report on the Japanese task force approaching Leyte Gulf, and participated in the Battle for Leyte Gulf; sank an enemy heavy cruiser and two other vessels; and rescued the entire crew of the submarine Darter, which had been grounded by a shoal. Captain Claggett was awarded the Navy Cross for heroism during the Dace’s Fifth War Patrol and a Second Bronze Star Medal for meritorious achievement during her Fourth.

In 1945 he had shore duty as Assistant Officer in Charge of the Submarine School for Enlisted Personnel at the Submarine Base, New London, Connecticut. For outstanding service in that capacity from January to September 1945, he received a Letter of Commendation, with Ribbon, from the Secretary of the Navy. From January 1946 until July 1947 he commanded USS Cutlass, a submarine based on Panama which made a good-will cruise to Colombia, Venezuela, and the West Indies.

Following a tour of duty as Assistant Fleet Operation Officer in the Office of the Chief of Naval Operations, and a year as Mining Officer on the Staff of Commander Submarine Force, Atlantic Fleet, he served for a year as Commander Submarine Division 101. Completing the course at the Armed Forces Staff College, in January 1953, he had instruction in the Office of Naval Intelligence preparatory to his assignment to Paris, France where he served for two years as Assistant US Naval Attaché and Assistant Naval Attaché for Air.

He was a student to the National War College, Washington, DC, in 1955-1956, after which he had a tour of duty in the Bureau of Naval Personnel, Navy Department. In September 1958 he was ordered to sea as Commanding Officer of USS Cadmus, repair ship, and on December 10, 1959, was transferred to command of Submarine Seven. After a year he returned to Washington to serve in the Joint Staff Office, Joint Chiefs of Staff, and in June 1963 was assigned to the Office of the Chief of Naval Operations, as Assistant Director of the Material Division.

Navy Cross: “For distinguishing himself by extraordinary heroism in the line of his profession as Commanding Officer of the USS Dace in her Fifth War Patrol in enemy-controlled waters from 1 September 1944 to 6 November 1944. Commander Claggett displayed outstanding ability and great courage in three persistent attacks against the enemy in which three large vessels were sunk. He evaded the enemy escorts through the skill and excellent fighting spirit of his ship. During his patrol he made a successful recue of the entire crew of the USS Darter… grounded by the shoal…”

Silver Star Medal: “For conspicuous gallantry and intrepidity in action as Gunnery Officer and Torpedo Officer of the USS Guardfish during the first two war patrols in enemy Japanese controlled waters… (He) contributed directly to the sinking of 66,450 tons and the severe damaging of 14,200 tons of enemy shipping. During tow gun attacks, he showed complete disregard for his own personal safety, and, and coolly directed the gun crew from his exposed station with marked success…”

Gold Star in lieu of the Second Silver Star Medal: “For conspicuous gallantry and intrepidity as Assistant Approach Officer of the USS Pargo, during her First War Patrol in enemy Japanese controlled waters… (His) intelligence interpretation of attack data and efficient operation of fire control equipment was a major contributing factor in the destruction of over 27,400 tons of enemy ships and in damaging vessels of more than 9,500 tons…”

Bronze Star Medal; “For distinguishing himself by heroic and meritorious conduct as Commanding Officer of the USS Dace during her fourth war patrol in the southwest Pacific Area, 13 June 1944 to 6 August 1944. Displaying great courage and aggressiveness, Commander Claggett led his vessel in four difficult attacks against enemy shipping, which resulted in the sinking of one cargo ship, one small ship, and in the damaging of a large transport. These attacks were made in dangerously shallow water, and in an area where the enemy was especially active in anti-submarine activities. His conduct was an inspiration to the officers and men on his vessel and distinguished him among those performing duties of the same character.”

Gold Star in Lieu of the Second Bronze Star Medal: “For meritorious service in connection with operations against the enemy as Assistant Approach Officer of the USS Pargo during her Second War Patrol in the vicinity of the Marianas Islands from 30 October 1943 to 8 December 1943. His excellent judgment and thorough knowledge of that attack problem assisted his Commanding Officer considerably in conducting successful attacks when resulted in the sinking of two enemy ships totaling 17, 719 tons and damaging two enemy ships totaling 4,700 tons…”

Letter of Commendation, with Ribbon, from the Secretary of the Navy: “For meritorious conduct while serving as Assistant Officer in Charge of the Submarine School for Enlisted Personnel, U.S. Submarine Base, New London, Connecticut, from January 1945 to September 1945.