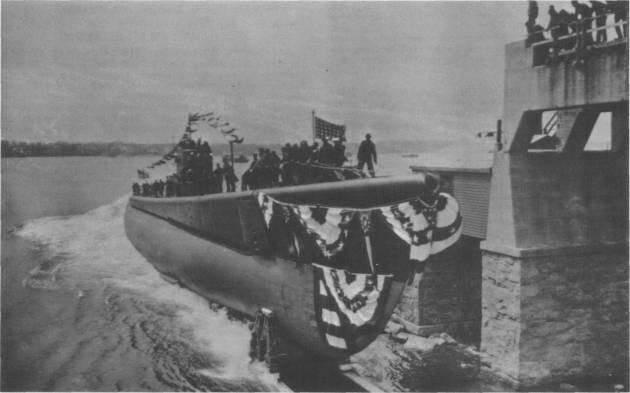 Any of many small North American fresh-water fishes of the carp family.

Departing New London 7 September 1943, Dace arrived at Pearl Harbor on 3 October, and 17 days later sailed on her first war patrol, bound for the southeast coast of Honshu and the approaches to Nagoya. On 7 November she made her first contact with the enemy, severely damaging a freighter with torpedo hits. Alert action by patrol craft prevented Dace from continuing her attack. She returned to Midway to refit between 11 December and 7 January 1944.

On her second war patrol, Dace cruised the shipping lanes south of Truk. On the night of 26 January 1944, she contacted a large tanker, closely guarded by two escorts. She fired a spread of torpedoes, heard five explosions, and broke off the contact to avoid the pursuit of the escort. The cause of the explosion remains unknown since Japanese records show no ship damaged in that area on that date. After fueling at Tulagi on 2 and 3 February, she continued her patrol close to Truk during raids there on 16 and 17 February by carrier aircraft. On 25 February she arrived at Milne Bay, New Guinea, to refit. She put to sea on her third war patrol 18 March, and 2 days later embarked a group of commandoes at Langemak Bay. For the next week she scouted the coast around Hollandia, New Guinea, landing the commando parties and taking them back on board at night. She refueled at Manus on 27 and 28 March, and sailed on for her assigned patrol area. This patrol was interrupted from 10 to 16 April, when Dace made rendezvous at sea with badly damaged Scamp (SS-277) and escorted her into Manus. On 13 May Dace put into Brisbane, Australia, to refit.

Dace's fourth war patrol, between 13 June 1944 and 12 August 1944, found her fueling at Manus on 20 and 21 June, and sailing on to patrol the Mindanao coast in Davao Gulf. Many contacts were made, but most were too small to provide worthwhile targets. On 9 July she scored at least three hits in a large transport whose two escorts dropped a total of 43 depth charges, shaking the submarine up badly but causing little damage. A daring reconnaissance mission took her into Sarangani Bay on 16 July, and 10 days later, she began an epic chase. She pursued a smoke contact visible on the horizon for a full day, eight times being forced down to avoid detection by patrolling aircraft. That night after dark, she reestablished contact, and just after midnight on 27 July Dace launched her attack, firing ten torpedoes into a convoy of three merchantmen guarded by six escorts. She sent a tanker to the bottom, then was forced deep as one of the escorts tried to ram her, and began its depth charge attack. Or. 31 July she sank another ship, this a small freighter, and the next day received another depth charging after an attack on a well-escorted freighter. With all torpedoes gone, Dace put in to Manus 6 August, and sailed on to Brisbane, arriving 12 August.

Dace cleared Brisbane 1 September 1944 on her fifth and most successful war patrol. She topped off her fuel tanks at Darwin on the 10th, and sailed for the exacting task of sweeping mines in Palawan Passage and Balabac Strait. Between 27 September and 3 October, she put in to Mios Woendi to repair her gyrocompass, returning to her patrol area 10 October. Four days later, she attacked a convoy of seven ships, sinking two and heavily damaging a third. She now joined Darter (SS-227) in a feat of skill and courage which brought both submarines the Navy Unit Commendation. On 23 October they contacted the Japanese Center Force approaching Palawan Pascage for the attack on the Leyte landings which developed into the the decisive Battle for Leyte Gulf. Since the location of this force had been a mystery for some time, the contact report flashed back by Dace and Darter was one of the most significant of the war. The two submarines closed the task force, and Darter attacked first, sinking the flagship, cruiser Atago. Now Dace sent her torpedoes away, although heavy depth charge attacks by the destroyers were beginning. She sank the heavy cruiser Maya, then went deep to avoid the counterattack. Continuing to track their target, hoping for a change to finish off the cruiser Takao previously damaged by Darter, the two submarines worked through treacherous Palawan Passage. Darter went aground, and Dace stood by. With the area full of searching enemy ships, Dace took Darter's men off, then fired torpedoes at her to destroy her. Before she had completed her work, she went deep to avoid a patrolling Japanese aircraft, which obligingly bombed the abandoned Darter. Dace sailed on for Fremantle, arriving 6 November.

Dace cleared Fremantle 2 December 1944 on her sixth war patrol. She scouted along the Singapore-Hong Kong shipping lane, then sailed on to mine the channel between Palau Gambir and the mainland. Finishing her task 16 December, Dace heard loud explosions from the mined area late in the afternoon, indication of a job well done. Three days later, while preparing to attack an eight-ship convoy, Dace was violently shaken by four depth charges or bombs. She went deep, hitting bottom, and while waiting there for the escorts to break off their attack was bumped, turned, scraped, and clanked along the bottom by the strong current. Somehow the enemy did not detect her for all this noise, and she was able to surface later, repair minor damage, and sail on to patrol farther north. On 28 December she sank Nozaki, a naval auxiliary, and damaged a freighter in the same convoy. She put in to Saipan for fuel on 17 January 1945, and reached Pearl Harbor 28 January.

After a west coast overhaul, Dace sailed from Pearl Harbor 25 May 1945 on her seventh war patrol. She fueled at Midway 29 May, and entered her patrol area in the Kurile Islands 7 June. Here she sank two sailing ships by gunfire, then headed into the Sea of Okhotsk. On 10 June she detected a large freighter and a small tanker sailing through the fog. Making her run into attacking position, she saw the convoy also included three escorts, but continued to close the freighter, firing her first spread at only 380 yards. She swung to fire at the tanker as the freighter exploded and sank, then was confronted by an escort apparently planning to ram. Dace fired a torpedo "down the throat" of the escort, and plunged deep. A severe depth charging followed, after which Dace fired again at the escort. She returned to Midway 25 July, and sailed on to Saipan 13 August, preparing for her eighth war patrol.

Recommissioned 8 August 1951, Dace operated from New London along the Atlantic coast and in the Caribbean until placed in commission in reserve at New London 31 December 1953. She was placed out; of commission in reserve at Portsmouth Naval Shipyard 15 January 1954 for extensive modernization, then was recommissioned 22 October 1954. After training men of the Italian Navy, she was decommissioned at New London 31 January 1955, and transferred to Italy under the Military Assistance Program the same day, She serves in the Italian Navy as Leonardo Da Vinci (S-510).

In addition to the Navy Unit Commendation, Dace received seven battle stars earned during her seven war patrols, the last five of which were designated as "successful." She is credited with having sunk 28,689 tons of Japanese shipping.