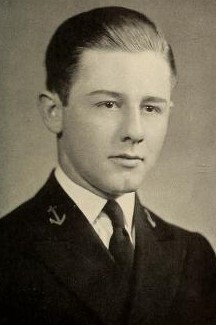 John Jay Flachsenhar was born in Mankato, Minnesota, on May 16, 1914, son of J.J. Flachsenhar and Mrs. (Allie A Scherer) Flachsenhar. He was graduated from Mankato High School and entered the US Naval Academy, Annapolis, Maryland, on appointment from his native state on June 29, 1931. He was graduated and commissioned Ensign on June 3, 1935, and through subsequent advancement attained the rank of Captain, to date from July 1, 1954.

After graduation from the Naval Academy, he was assigned to the USS Concord (CL-10), and served as Watch and Division Officer in that cruiser until June 1937, when he reported to the Submarine School, New London, Connecticut, for submarine instruction. He completed the course in December 1937, and in January 1938 joined the USS Pollack, a submarine of the Pacific Fleet, and served as Torpedo Officer, Gunnery Officer, and First Lieutenant until October 1939. He was then transferred to the USS Permit, in which he served as Gunnery Officer, First Lieutenant, Torpedo Officer, and finally Executive Officer prior to and following the outbreak of World War II, during eight War Patrols in the Asiatic-Pacific Area.

Detached from the Permit in May 1943, he assisted in fitting out the USS Rock, and at her commissioned in October of that year assumed command. Under his command the Rock soon proceeded to the Pacific where she engaged in Five War Patrols during the period ending in February 1945. For his war service Captain Flachsenhar was awarded the Silver Star Medal, a Gold Star in of the Second SSM, and a letter of Commendation, with Ribbon and Combat “V.”

Silver Star Medal:  “For conspicuous gallantry and intrepidity as Engineer and Repair Officer, Diving Officer and Assistant Approach Officer of a United States submarine during War Patrols in enemy Japanese-controlled waters during World War II. Performing his duties with courage and efficiency Lieutenant Commander Flachsenhar contributed materially to the sinking or damage of more than 40,000 tons of enemy shipping. During an attack on a heavily escorted convoy, he was responsible in large measure for the correct firing data which enabled his ship to sink two Japanese vessels and to damage a third…”

Gold Star in lieu of the Second Silver Star Medal: For conspicuous gallantry and intrepidity as Commanding Officer of the USS Rock, during the Third Wat Patrol of that vessel in enemy Japanese controlled waters from June 22 to August 12, 1944. Braving adverse weather conditions, (he) penetrated heavy enemy escort screens to deliver two bold torpedo attacks and inflict severe damage on five hostile ships, totaling 39,000 tons. Escaping subsequent enemy countermeasure, he succeeded in returning to port without damage to his ship…”

In April 1945 he reported to the Naval Shipyard, Hunter’s Point, San Francisco, California, where he remained on duty for a year. From June 1946 until October 1947 he was Commanding Officer of the USS Carp, another submarine operating in the Pacific Area, and when detached he began a tour of duty at San Diego, California, as Director of Warfare on the Staff of the Commandant, Eleventh Naval District. Detached from that assignment in May 1950, he served from July of that year until August 1953 as Operating Officer, Military Sea Transportation Service, Western Pacific Area, at Tokyo, Japan.

In September 1953 he assumed command of the USS Warrick (AKA-89), and remained in command of that cargo attack vessel until November 1954. The Warrick was awarded the “E” for the period July 1, 1954 to July 1, 1955. In December 1954 he reported as Commanding Officer of the US Naval Schools Command, at Treasure Island, San Francisco, California. On November 22, 1957 he was detached for duty as Chief of the Naval Section, Military Assistance Advisory Group, Viet Nam. Saigon. On his return to the United States in 1960, he became Administrative Officer of the Boston Naval Shipyard. On March 12, 1962, he assigned duty as Assistant Chief of Staff, J-4 Division, to Commander US Forces, Japan.