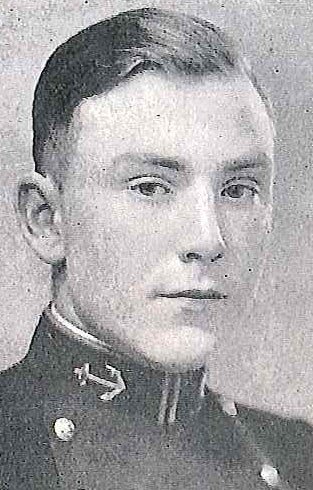 Thomas Joseph Flynn was born in New York, New York, on December 31, 1904. He was appointed Midshipman from the Fifteenth Congressional District of New York, and entered the US Naval Academy, Annapolis, Maryland, on July 25, 1923. Graduated and commissioned Ensign on June 2, 1927, he subsequently advanced in rank to that of Captain, his date of rank March 20, 195.

Following graduation in June 1927, he remained at the Naval Academy for two months’ instruction in aviation. In August he joined USS Milwaukee, a unit of Light Cruiser Division 2, Asiatic Fleet. He remained on Asiatic Station until February 1931, after transferring to USS Pope in March 1929 and USS Peary in September 1930. Reporting to the Receiving Ship, San Francisco, California, in March 1931, he was assigned to USS Broome, in which he served until June 1932, while she operated with Destroyer Division 16, Battle Force.

Duty in connection with fitting out USS Indianapolis, at the New York Shipbuilding Corporation, Camden, New Jersey, was followed by duty in that cruiser from her commissioning in November 1932 until June 1935, during which period she operated as Flagship of Scouting Force.

He returned to Annapolis, Maryland, for the course in Ordnance Engineering at the Postgraduate School, continuing instruction at the Naval Gun Factory, Navy Yard, Washington, DC, until May 1938. He served aboard USS Colorado from June of that year until May 1941, after which he had a tour of duty in the Bureau of Ordnance, Navy Department, Washington, DC, until September 1944, during the greater period of World War II. In November 1944 he joined USS Iowa, to serve as her Executive Officer until the cessation of hostilities in August 1945.

For “meritorious achievement as Executive Officer, and on several occasions, Navigator of USS Iowa during operations against enemy Japanese forces in the Ryukyu Islands Area from November 1944 to August 1945. . . .” he was awarded a Gold Star in lieu of a Second Bronze Star Medal with Combat “V”. The citation commends him for “valuable assistance. . . .in inflicting considerable damage on enemy positions material. . . .in operations in support of the capture and occupation of Okinawa and surrounding islands. . . .”

In command of a crew assigned to the seizure of the Japanese Battleship Nagato, in Tokyo Bay, on August 30, 1945, he was awarded the Bronze Star Medal with Combat “V”, for “meritorious achievement” The citation states in part: “Boarding the Nagato with his crew, Captain Flynn took possession and command and ordered the United States ensign raised which symbolized the unconditional and complete surrender of the Japanese Fleet. . . .he established the security and preservation of the ship for later examination and disposition and was personally responsible for the success without incident of this unusual phase of the initial occupation of the Japanese homeland. . . .”

He was designated Aide and Chief of Staff to Commander Battleship Division 7, in September 1945, and from June to October 1946 served as Commanding Officer of USS Birmingham (CL 62).  After a tour of duty in the Office of the Board of Inspection and Survey, Pacific Coast Section, San Francisco, he assumed command of the command of USS Chikaskia (AO 54).