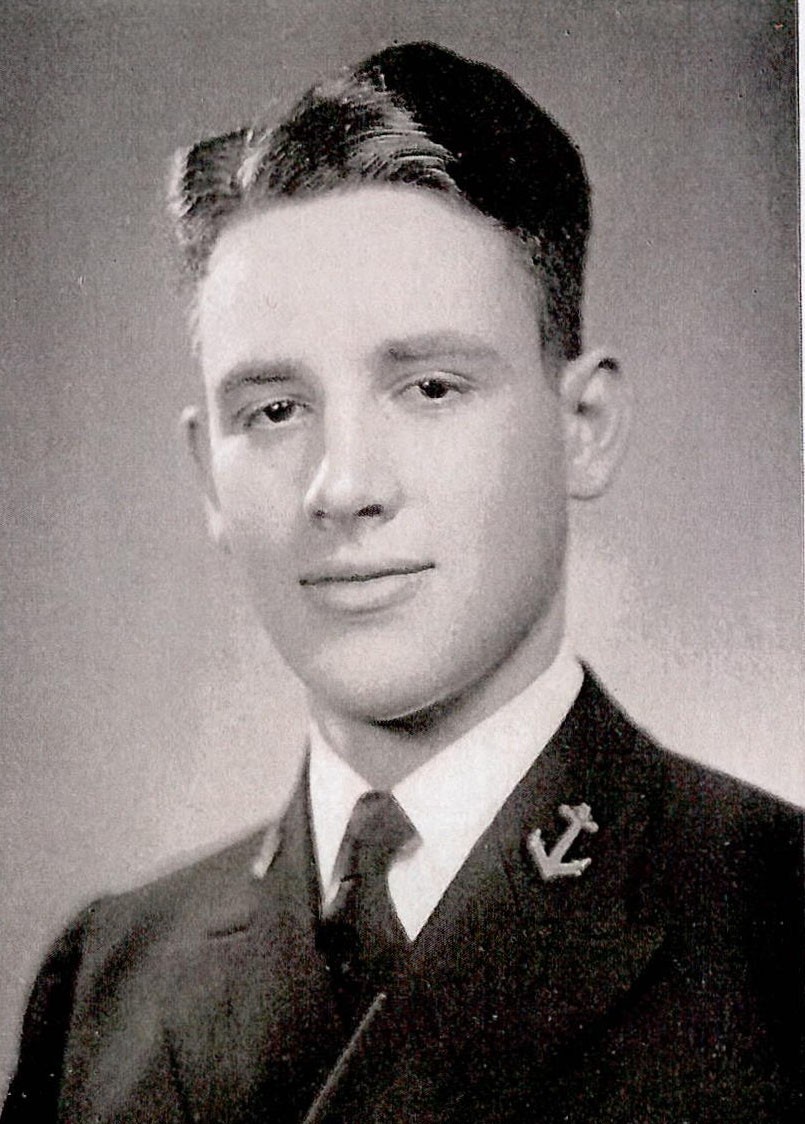 Bradley Frederick Bennett was born in New Milford, Connecticut, on August 29, 1911, son of Frederick Lum and Florence Kay (Bradley) Bennett. He attended New Milford High School and prior to entering the US Naval Academy, Annapolis, Maryland, worked as an aircraft helper for eighteen months; as an aircraft bench hand for six months and a construction laborer for six months. He was appointed a Midshipman from his native states in 1931 and after completing the four year course was graduated with distinction, twentieth in the Class of 1935. Commissioned Ensign on June 6, that year, he subsequently advanced in rank, attaining that of Captain, to date from October 1, 1953.

Following graduation from the Naval Academy in 1935, he joined USS Saratoga and in June 1937 was detached for instruction at the Massachusetts Institute of Technology at Cambridge, (the title of his thesis: “Some Metallurgical Factors Affecting the Cavitation Damage of Alpha Brass”). He received the degree of Maser of Science in Naval Construction in March 1940, and was assigned to the Norfolk (Virginia) Navy Yard. There he served as Docking Officer (one year); Laboratory Officer (six months); Ship Superintendent (one year); Assistant Planning Officer (three and one half years); member, Joint Merchant Vessel Board (one year); and Camouflage Officer (one year). In July1944 he transferred to the Naval Shipyard, Pearl Harbor, Territory of Hawaii, where he had duty as Assistant Hull Superintendent (fifteen months); Hull Superintendent (eighteen months) and Assistant Repair Superintendent, Hull (three months).

“For meritorious service as Assistant Hull Superintendent of the Production Division of the Navy Yard, Pearl Harbor, Territory of Hawaii, from July 29, 1944 to September 2, 1945…” he was awarded the Bronze Star Medal. The citation continues in part: “Demonstrating outstanding technical ability, Commander Bennett supervised the berthing of from 150 to 185 ships daily undergoing repairs and alterations and, by skillfully directing their assignment, expedited the return to active service of ships of the fleet during a critical period of the war against the Japanese. Responsible for the assignment of officers in the Hull Section, he trained large numbers of inexperienced officers to permit the maximum utilization of their skills, thereby contributing materially to the high wartime production record achieved by the Pearly Harbor Navy Yard…”

From July 1947 until August 1950 he was Engineering Services Officer at the Naval Research Laboratory, Washington, DC after which he served as Repair Superintendent at the US Ship Repair Facility, Fleet Activities, Yokosuka, Japan. “For meritorious services…(in that capacity) from August 11, 1950 until June 16, 1951…” he received a Letter of Commendation, with authorization to wear the Commendation Ribbon, from Commander Naval Forces, Far East. In July 1951 he returned to the Massachusetts Institute of Technology, where he was a student until September 1953, receiving the degree of Master of Science in Physics (the title of his thesis: “Some Measurements of Gamma Ray Scattering”).

Assigned next to the Bureau of Ships, Navy Department, Washington, DC, he served fro four months as Project Officer investigating hazards connected with shipboard hydraulic systems, and then assumed duty as Head of the Materials Development Division. He remained in the Bureau of Ships until July 1957, when he became Commanding Officer of the Office of Naval Research Branch Office, London, England. Since December 1960, he has been Director of Administration at the Naval Research Laboratory, Washington, DC.