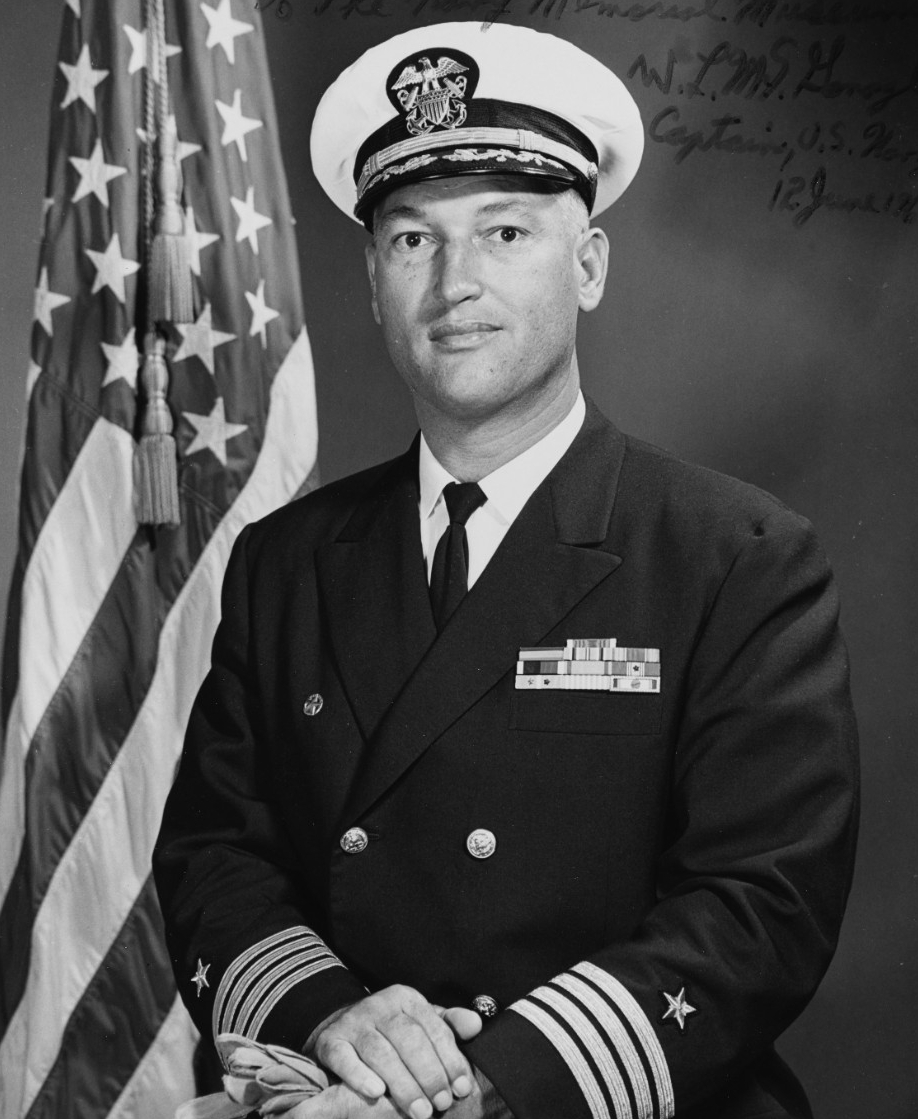 William Loren McGonagle was born in Wichita, Kansas, on 19 November 1925. He attended Coachella Valley (California) Union High School, prior to entering the University of Redlands, Redlands, California, where he was a member of the V-12 Program. In October 1945 he transferred to the University of Southern California at Los Angeles, from which he received a Bachelor of Arts degree in History in June 1947. While there he was a member of the Naval Reserve Officers Training Corps Unit and upon graduation was commissioned Ensign. He subsequently advanced in rank, attaining that of Captain, to date from 2 October 1967.

In July 1947 he joined USS Frank Knox (DDR-742), and from April to June 1950 had duty as Assistant Engineering Officer in USS Partridge (AMS-31). He then joined USS Kite (AMS-22), in which he served as Executive Officer, Engineering Officer, and Gunnery Officer. While on board that minesweeper, he participated in combat minesweeping patrols in Korean waters and was entitled to the Ribbon for, and a facsimile of the Presidential Unit Citation awarded the Kite.

Detached from the Kite in August 1951, he attended the Electronics Material Officers' Course at the US Naval School (Electronics), Treasure Island, San Francisco, California. In January 1952 he was assigned to the US Naval Advanced Base, Bremerhaven, Germany, as Weser River Patrol Engineering Officer. In addition, he was Officer in Charge of the "M" boats - six German built and manned mine sweepers and the "R" boats - twelve German built and manned motor minesweepers. These minesweepers were engaged in clearing and check sweeping in the Baltic and North Sea for mines planted in World War II to open commercial sea lanes and destroy hazards to navigation.

From August 1953 to December 1954 he was Personnel Officer and Administrative Assistant at the US Naval Communication Station, Philadelphia, Pennsylvania, and in January 1955 joined USS Rochester (CA-124), in which he served as First Lieutenant, Officer of the Deck Underway, and Command Duty Officer. In February 1957 he assumed command of USS Mataco (ATF-86).

In January 1959 he was assigned to the Naval Reserve Officers Training Corps Unit at the University of Idaho at Moscow, as an Instructor in Naval Weapons Operations and Tactics, and Naval Leadership. While in that assignment he received a Bachelor of Science degree in Education from that University. From July 1961 to September 1963 he commanded USS Reclaimer (ARS-42), then joined the Staff of Commander Service Force, US Pacific Fleet as Current Operations Officer. In April 1966 he assumed command of USS Liberty (AGTR-5). He was in command of the Liberty when she was attacked and damaged by Israeli planes and patrol craft off Egypt's Sinai Peninsula in June 1967. He was awarded the Medal of Honor and cited as follows:

"For conspicuous gallantry and intrepidity at the risk of his life above and beyond the call of duty as Commanding Officer, USS LIBERTY (AGTR-5) in the Eastern Mediterranean on June 8-9, 1967. Sailing in international waters, the Liberty was attacked without warning by jet fighter aircraft and motor torpedo boats which inflicted many casualties among the crew and caused extreme damage to the ship. Although severely wounded during the first air attack, (he) remained at his battle station on the badly damaged bridge and, with full knowledge of the seriousness of his wounds, subordinated his own welfare to the safety and survival of his command. Steadfastly refusing any treatment which would take him away from his post, he calmly continued to exercise firm command of his ship. Despite continuous exposure to fire, he maneuvered his ship, directed its defense, supervised the control of flooding and fire, and saw to the care of the casualties. (His) extraordinary valor under these conditions inspired the surviving members of the Liberty's crew, many of them seriously wounded, to heroic effects to overcome the battle damage and keep the ship afloat. Subsequent to the attack, although in great pain and weak from the loss of blood, (he) remained at his battle station and continued to conn his ship for more than seventeen hours. It was only after rendezvous with a United States destroyer that he relinquished personal control of the Liberty and permitted himself to be removed from the bridge. Even then, he refused much needed medical attention until convinced that the seriously wounded among his crew had been treated..."

He was also awarded the Purple Heart Medal for wounds received during this action and is entitled to the Ribbon for, and a facsimile of the Presidential Unit Citation awarded the USS Liberty.

In November 1967 he reported as Prospective Commanding Officer of USS Kilauea (AE-26), building at the General Dynamics Corporation, Quincy Division, Quincy, Massachusetts, and assumed command of that ammunition ship upon her commissioning on 10 August 1968. He became Commanding Officer of the Naval Reserve Officers Training Corps Unit and Professor of Naval Science at the University of Oklahoma at Norman in August 1969.