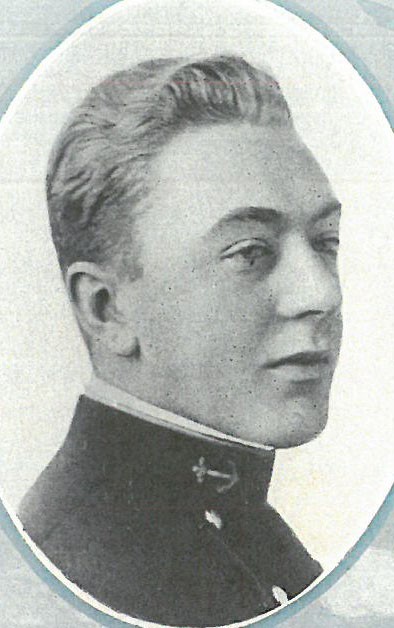 Watson Osgood Bailey was born at Dorchester, Massachusetts on October 2, 1897, a son of the late Ames F. Bailey and Mrs. Alice O. Bailey. He attended Lynn Classical High School, Lynn, Massachusetts, before his appointment in 1914 to the US Naval Academy, Annapolis, Maryland, from his native state. Graduated and commissioned Ensign June 28, 1917, with the class of 1918, he advanced through the various grades to the rank of Captain to date from January 1, 1942. He was transferred to the Retired List of the Navy on June 30, 1949 and promoted to the rank of Rear Admiral.

Upon detachment from the Naval Academy in 1917, he had one month’s duty aboard USS Maine, and was then assigned duty in the French transport, SS La France. Detached from that vessel in September, 1918, he had brief assignments in USS C.W. Morse, receiving ship at New York; H.M.S. Caronia, British transport; and the USS Bay Ridge, receiving ship at Brooklyn, New York. From November 1918, he served aboard USS North Dakota until October, 1919, when he reported to the Submarine School, New London, Connecticut for duty under instruction. Following completion of the course there in December, 1919, he had duty fro one year consecutively in USS R-11; USS M-1; and USS T-3, and qualified for command of submarines. He reported aboard USS Minnesota in January, 1921, and served in that battleship for one year. For a short period thereafter, he served aboard USS S-21, and USS O-3, and was assigned to USS K-6 as Commanding Officer in July, 1922. From May until November 1923 he had duty in  S-20 and in command of USS N-1.

When relieved of command of the N-1, he had his first shore duty at the Submarine Base, New London, Connecticut until reporting for duty under instruction at the Postgraduate School, Annapolis, Maryland in July, 1925. Completing his studies there in June, 1926, he continued under instruction at Columbia University, New York, New York, and received a Master of Science degree from that University in 1927. He had three months’ duty in the Third Naval District, New York, and during September and October, 1927, at various plants in the area, still under the supervision of the Postgraduate School.

In November, 1927 he was Navigator of USS Canopus. He transferred in January, 1928 to USS Beaver as Engineer Officer. Continuing in the Beaver until October, 1928, he was then detached and ordered to Submarine Division SIXTEEN, as Division Engineer Officer, and before his detachment in July, 1930, he had served two months as Commanding Officer of the S-34.

From August, 1930 to May, 1932, he served at the Navy Yard, Portsmouth, Virginia, followed by three years as Chief Engineer of USS Raleigh. From June, 1935 until July, 1937 he served as Assistant Inspector of Material at the Bethlehem Steel Company, Quincy, Massachusetts, and when detached from that duty he remained at the shipyard in connection with fitting out USS Craven, and assumed command of that vessel with she was commissioned on September 2, 1937.

Reporting in July, 1939 as Inspector of Naval Material of the Chicago, Illinois, District, he served in that capacity two years before joining USS New Mexico as Executive Officer, and served in that battleship until May, 1942. From June to August, 1942, he commanded USS George F. Elliott, transport, transferred to command of USS Neville, attack transport, and when relieved of that command in March, 1943, he had duty as Division Commander of Transport Divisions FIVE and THREE, with USS Charles Carroll as flagship. He was awarded the Legion of Merit and Gold Stars in lieu of the Second, Third, and Fourth Legion of Merit during this period of service, and was cited “For exceptionally meritorious services to the Government of the United States as commander Transport Division FIVE during the amphibious invasion of the Island of Sicily in July 1943. With export professional ability and aggressive leadership…directed all preparatory training and molded Transport Division FIVE into an effective combat force…”

Second Legion of Merit; “For exceptionally meritorious conduct..as Commander of a Task Unit during the amphibious invasion of Italy..” Third Legion of Merit: “For exceptionally meritorious conduct…as Commander Transport Division FIVE, Amphibious Force, Atlantic Fleet, prior to and during the amphibious assault on the German-held Coast of France, June 6, 1944. Commanding a main group of the Assault Force which comprised a mixed fleet of American and British transports and American Landing Craft, Captain Bailey skillfully maneuvered his flotilla inshore despite the hazards of total darkness and extremely adverse seas…”

Fourth Legion of Merit: “For exceptionally meritorious conduct…as Commander of a Transport Division and Commander of a Beach Assault Group during the amphibious invasion of Southern France in August, 1944…”

Returning to the United States in January, 1945, he was assigned duty as Commanding Officer of the Amphibious Training Base, Oceanside, California, and served there until May, 1946, when he reported as Chief of Staff to Commander, Amphibious Training Force, Pacific, with headquarters in Coronado, California. In February, 1947 he assumed the duties of Commanding Officer of the Naval Amphibious Base, at Coronado, and was so serving when his retirement became effective on June 30, 1949.