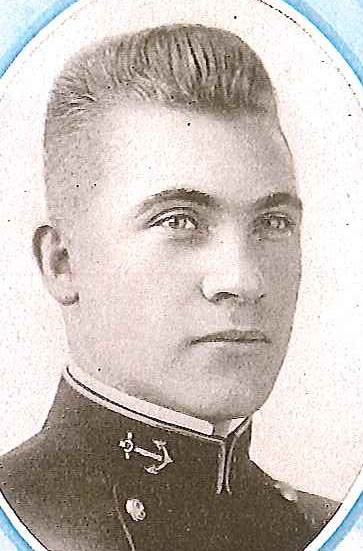 Rear Admiral Biesemeier was born in Hiawatha, Kansas, on July 24, 1894. He attended the public schools of Modesto, California, before his appointment to the US Naval Academy from the Seventh District of California in 1914. He was graduated and commissioned Ensign with the Class of 1918 on June 1917, and subsequently attained the rank of Captain to date from June 10, 1943. He was transferred to the Retired List in the rank of Rear Admiral on January 1, 1947.

Rear Admiral Biesemeier served during World War I in USS New Hampshire, engaged in training armed guard crews for the US Merchant Marine, later in convoying troop transports to France, and upon termination of the War in transporting troops from Brest, France, to the United States.

On October 1, 1919, he entered the Submarine School attached to USS Fulton, and after graduation in December of that year he served in the USS L-1 until March 1920. He commanded successively USS L-4, USS E-1, USS K-8, and USS O-8, until July 1924. During the following two years he was an instructor in the Submarine School, Submarine Base, New London, Connecticut, and was also Aide to the Commandant. During the period there he was detailed as technical advisor to the Peruvian Naval Commission in the United States in connection with the building of submarines R-1 and R-2 for that Country.

From October 1927 until July 1928 Rear Admiral Biesemeier commanded USS S-24, and for a year thereafter was Aide and Flag Lieutenant and Operations Officer on the staff of Commander Submarine Battle Force. In June 1929 he was ordered to duty in the Office of the Judge Advocate General of the Navy, Navy Department, Washington, DC, and for two years while attached to that office, studied law at George Washington University, Washington, graduating with distinction 1932. He was elected to membership in the National honorary legal fraternity “Order of the Coif,” and was admitted to the Bar of the District of Columbia.

Rear Admiral Biesemeier was Aide and Flag Secretary on the staff of Commander Cruiser Division Two in 1932-33, and the next year was Chief of Staff to Commander Cruisers, Battle Force. He returned to the Office of the Judge Advocate General in June 1936, and was in charge of the Division of contracts, Real Estate, Insurance, Performance bonds, and Auto Claims for two years. After sea duty from June 1938 until June 1940 in command of USS Phelps, he again returned to the Office of the Judge Advocate General to serve this time as Aide and legal adviser to the Judge Naval-Air Base Board, and in the early period of World War I (1942) had duty in the Administrative and Admiralty and International Law Division of that Office.

From June 30, 1942, until June 20, 1944, Rear Admiral Biesemeier commanded the USS Charles Carroll, transport. For exceptionally meritorious service in that command he was awarded the Legion Merit a Gold Star in lieu of a Second Legion of Merit, and the Bronze Star Medal. The citations follow:

“For exceptionally meritorious conduct in the performance of outstanding services to the Government of the United States as Commanding Officer of USS Charles Carroll in the emphibious invasion of the Island of Sicily, July 1943. After detailed preparations, Commander Biesemeier, displaying brilliant leadership and cool courage under fire, gallantly fought his ship throughout repeated bombing attacks and effected the landing of embarked troops and equipment with marked efficiency. Upon completion of these operations, he skillfully retired from the combat area without damage to his vessel. He extraordinary ability and untiring devotion to duty contributed greatly to the success of this hazardous undertaking.”

Gold Star in lieu of Second Legion of Merit:

“For exceptionally meritorious conduct in the performance of outstanding services to the Government of the Untied States as Commanding Officer of USS Charles Carroll during the amphibious invasion of Italy. With superb skill and sound judgment, Captain (then Commander) Biesemeier, by his direction, planning and exemplary performance under fire, enabled embarked troops, vehicles and equipment to land successfully on heavily defended assault beaches. Throughout a critical period of persistent and vigorous bombing attacks, he gallantly fought his ship, accomplished his mission and withdrew without serious casualty to his command. His inspiring leadership and conscientious devotion to duty were in keeping with the highest traditions of the United States Naval Service.”

“For meritorious service as Commanding Officer of USS Charles Carroll, in action against enemy forces during the amphibious assault on Normandy, France, June 6, 1944. Skillfully maneuvering his ship in the face of grave hazards, Captain (then Commander) Biesemeier successfully debarked his assault troops and dispatched the assigned landing craft to the proper beaches without loss despite unfavorable sea conditions. By his initiative, keen insight and able leadership in coordinating his boat group and control craft, Captain Biesemeier accomplished this difficult mission, thereby contributing materially to the success of our operations in this historic engagement and upholding the highest traditions of the Untied States Naval Service.”

Rear Admiral Biesemeier also received a Letter of Commendation with authorization to wear the Commendation Ribbon from the Commander in Chief, Atlantic Fleet, for service in command of USS Charles Carroll during the assault and occupation of French Morocco from November 8, 1942 to November 11, 1942.

Rear Admiral Biesemeier was relieved of command of USS Charles Carroll and ordered in June 1944 to returned to the Navy Department, Washington, DC, where he had duty as Judge Advocate of the Court of Inquiry which was ordered by the Secretary of the Navy to inquire into the circumstances connected with the Japanese attack on Pearl Harbor on December 7, 1941. This Court convened at the Navy Department on July 17, 1944.

He had duty for several months, before being relieved of active duty, with a General Court Martial in the Twelfth Naval Deistrict, San Francisco, California. He was transferred to the Retired List of the Navy and promoted to the rank of Rear Admiral on January 1, 1947.