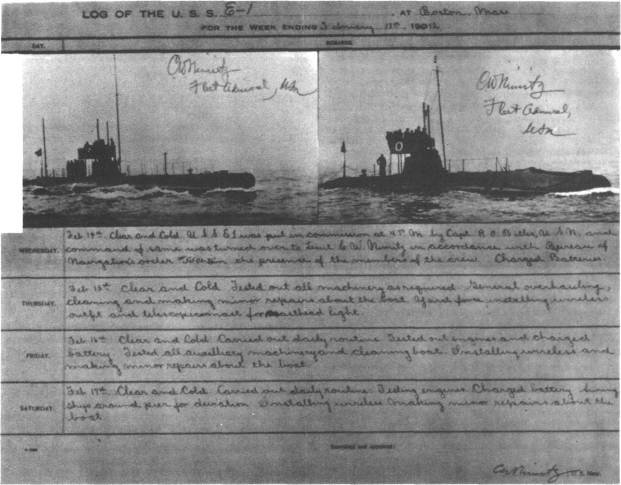 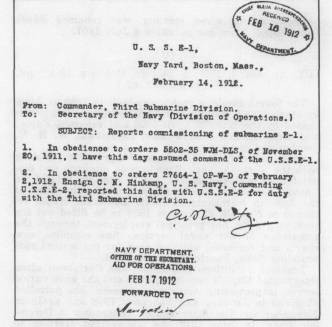 Skipjack (Submarine No. 24) was laid down on 22 December 1909, at Quincy, Mass., by Fore River Shipbuilding Co. as a sub-contractor for the Electric Boat Co.; launched on 27 May 1911; sponsored by Mrs. Donald R. Battles, wife of Naval Constructor Donald R. Battles, who was on duty at Fore River at the time; renamed E-1 on 17 November 1911; and commissioned at the Boston (Mass.) Navy Yard on 14 February 1912, Lt. Chester W. Nimitz in command.

On 20 February 1912, E-1 sailed from Boston for Norfolk, Va., via Newport, R.I., and New York, N.Y. She underwent tests off the Virginia capes through April.  During that period of time, Lt. Nimitz rescued F2c W.J,. Walsh, who had fallen overboard into the icy waters of Hampton Roads on 20 March 1912 from Tonopah (Monitor No. 8), that had been serving as the tender for the Atlantic Submarine Flotilla. A strong current was carrying Walsh away from the ship when Nimitz leaped in to save him. When recovered, both men were exhausted; Nimitz would later receive the Treasury Department's Silver Life-Saving Medal.

Later, E-1's engines were overhauled at New London, Conn., from which she cleared on 4 July 1912. At this point she began operating off New England, based on Newport, through 19 August, when she arrived at Provincetown, Mass. That same day, she was detached from the Torpedo Flotilla, Atlantic Fleet and attached to the Atlantic Submarine Flotilla. She then shifted to Boston (7–11 September) and returned to Provincetown (12–18 September) before heading to the New York Navy Yard, Brooklyn, N.Y., where she arrived on 20 September, for alterations, repairs, and installation of a Sperry gyrocompass, for which she became a pioneer underwater test ship. She also experimented with submerged radio transmission. E-1 conducted tests of these and other important developments under the direction of Commander, Atlantic Submarine Flotilla.

E-1 then moored at the North River, N.Y. on 12 October 1912 in advance of passing in review with the fleet on the Hudson before Secretary of the Navy George von L. Meyer on the 14th. The following day, she proceeded down the Hudson and out through the Verrazano Narrows into the Atlantic. Bound for Norfolk, she arrived on 17 October. She remained there until 6 December, when she sailed up the Chesapeake Bay to Annapolis, Md. She then returned to Norfolk on 8 December. Aside from visiting Lynnhaven Bay, Va., on 13 December, the submarine remained at Norfolk through the end of the year. 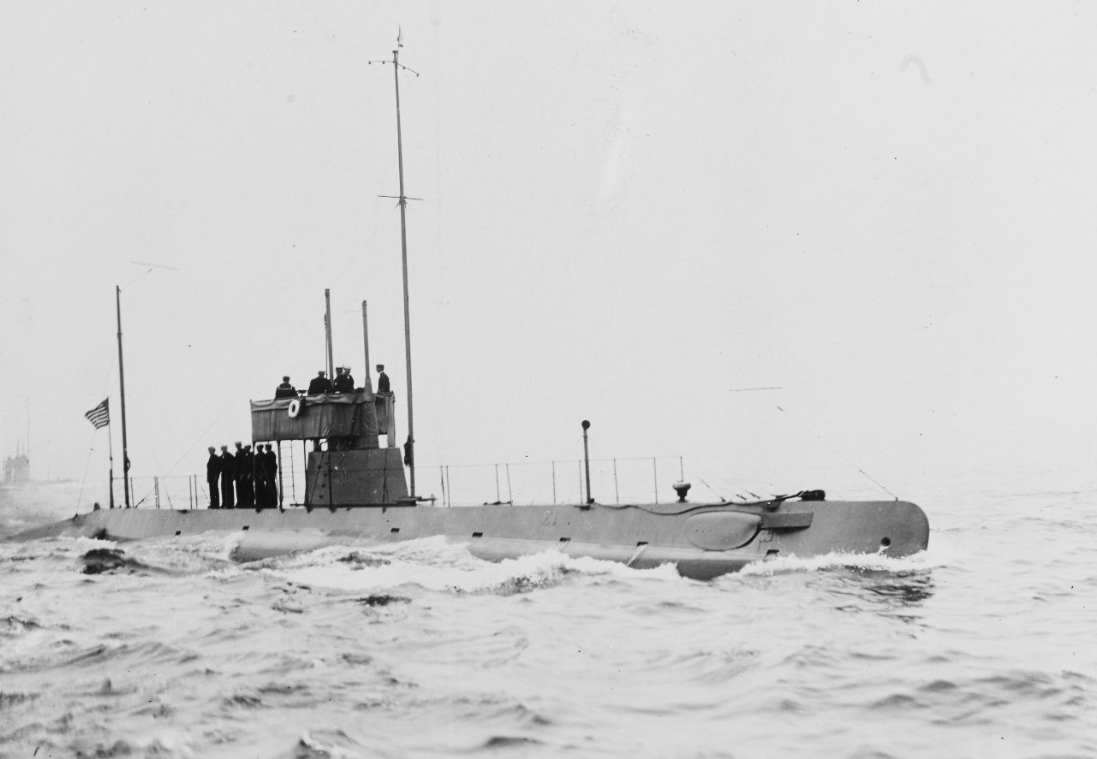 On 8 January 1913, the Navy Department issued a memorandum stating that E-1 was finally accepted by the Navy. On 14 January, the Atlantic Submarine Flotilla was re-designated Submarine Flotilla, Torpedo Flotilla, Atlantic Fleet and E-1 was assigned to the new organization. She cleared Norfolk on 20 January and proceeded southward making visits to Charleston, S.C. (22–24 January); Brunswick, Ga. (25–27 January); Key West, Fla. (29 January–1 February; and Nuevitas Bay, Cuba (3–4 February) before arriving at Guantanamo Bay, Cuba on 6 February. She conducted training and trials in Cuban waters to 19 March, when she departed Nuevitas Bay and proceeded to Jacksonville, Fla. (21–24 March) en route to Newport. In transiting northward, she made visits to Charleston (25–26 March); Norfolk (28 March–5 April); New York Navy Yard (8–10 April) before reaching her destination at Newport on 11 April. She remained there until 21 July, when she went to sea for exercises. Periodically returning to Newport, the submarine would operate from the Rhode Island port in the waters off New England and Long Island through the end of September. E-1 cleared Newport on 1 October and moored in the North River on 2 October. Getting underway again on the 11th, she reached Hampton Roads, Va. on 12 October, before entering the Norfolk Navy Yard the following day. The submarine would remain at the navy yard into 1914. 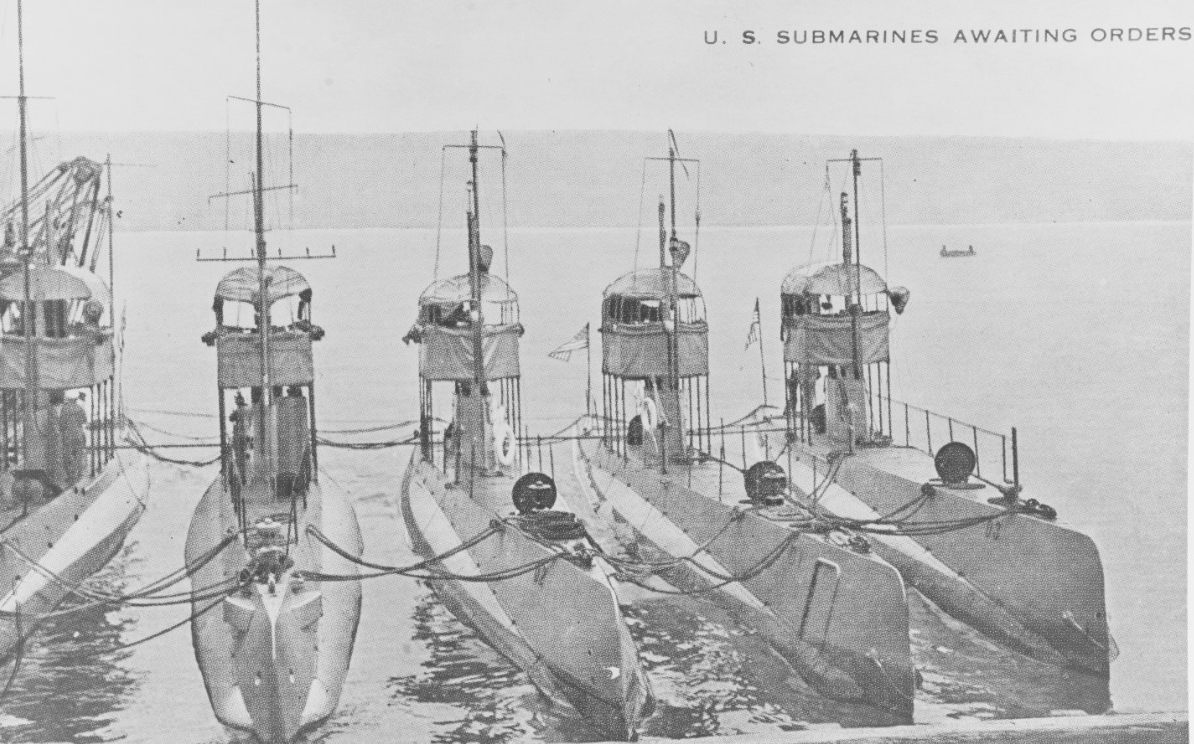 While E-1 lay at Key West on 4 April 1914, the Atlantic Submarine Flotilla was detached from the Torpedo Flotilla, Atlantic Fleet, and re-designated the Submarine Flotilla, Atlantic Fleet. Clearing again on 7 April, she proceeded north with visits to Fernandina, Fla. (9–11 March); Savannah, Ga. (11–15 April); Charleston (16–18 April); and Norfolk (21–27 April), before entering the New York Navy Yard on 29 April, and remaining there until 10 May. After clearing the yard on 10 May, she proceeded directly to Norfolk, reaching the following day. Remaining at the yard until 16 July, she got underway on 16 July and proceeded up Chesapeake Bay and into the Potomac River to visit the Washington Navy Yard (17–22 July). She then made her way to the New York Navy Yard (24–27 July) en route to Newport, where she arrived on the 27th. There she would remain until 5 October, when she went to sea and made her way to Napeague Bay [Long Island], N.Y. that same day. She returned to Newport (10–15 October), before moving on to New London (15–19 October), before standing back in to Newport. (19–21 October). The boat cleared Narragansett Bay on 21 October, bound for New York, she docked at the New York Navy Yard (22–30 October). Clearing on the 30th, she passed between the Virginia capes and moored at Hampton Roads on 31 October, before shifting to the Norfolk Navy Yard on 5 November. She would remain there well into 1915.

E-1 cleared Norfolk on 14 February 1915 and headed south as she had in the previous two winters. She visited Charleston (16–21 February) and Fernandina (22 February) before arriving at Key West on 25 February. Underway again on 2 March, the submarine transited to Pensacola, where she spent the ensuing weeks engaged in training. She departed Pensacola on 27 April and traveling via Key West (27–30 April), reached the North River on 5 May. She departed the North River on 18 May and conducted maneuvers while en route to Newport, where she arrived on 21 May. After a month at Newport, she cleared on 22 June and entered the New York Navy Yard on 23 June. E-1 cleared the yard on 26 July and reached Newport the following day. She would operate from there until her departure on 18 October, when she re-located to New London. She would remain at the base on the Thames River through the end of the year. On 27 December 1915, E-1 was directed to proceed to the New York Navy Yard by 1 February 1916 for the installation of a new storage battery and engines and general overhaul.

E-1 departed New London on 30 January 1916 and proceeded into Long Island Sound to make her way to the New York Navy Yard. Arriving on 1 February, she docked to undergo her scheduled yard work. She remained there until clearing on 8 August bound for Newport, where she reached later that same day. Over the ensuing six weeks, the submarine operated in the waters between Newport and New London. After a brief visit to New York (16–19 September), the submarine arrived at New London and operated from there into the first quarter of 1917. With the German resumption of unrestricted submarine warfare on 1 February 1917, tensions between the U.S. and Germany heightened. During this time, E-1 resumed operations underway and arrived at Newport on 24 March. The following day she stood out and went to sea. conducting neutrality patrols and training exercises.

The U.S. declared war on Germany on 6 April 1917 and entered the Great War. The following day, E-1 arrived at New London and then sailed on the 10th, bound for the New York Navy Yard, where she arrived later that day and secured alongside Tonopah (Monitor No. 8) that was assigned to operate as a tender to boats of the Fourth Division. She then underwent maintenance until entering dry dock on 19 April. She undocked on 1 May and cleared the yard on 2 May. She stood in to New London later that same day. The crew conducted training both on board and ashore at New London over the following weeks. She got underway on 5 June, proceeding down the Thames into Long Island Sound, bound for Port Jefferson [Long Island], N.Y. (Base No. 10) after making a test dive, she returned to New London (Base No. 22). Underway again on 8 June, she arrived at Port Jefferson. Returning to New London on 10 June, she continued to operate based from here training officers and crew at the Submarine School. On 12 September, she received orders assigning her to Submarine Division Four. She shifted to the New York Navy Yard on 1 October and entered dry dock No. 1 on 3 October, remaining there undergoing overhaul until she came out on the 13th. She departed for New London on 16 October and arrived at her destination later that same day. The crew then spent the next two weeks with further training based from New London. The submarine got underway on 31 October, en route to Newport (Base No. 12), where she arrived on 1 November. She then returned to New London (10–29 November) before arriving back at Newport on the 29th, to make final preparations prior to departing for overseas deployment.

E-1 cleared Bermuda with the flotilla on 1 January 1918, and proceeded through more storms to Ponta Delgada (Base No. 13), Azores, where she arrived at 7:30 a.m. on 12 January. After her arrival, she again underwent overhaul and repairs through most of the remainder of the month. She undertook her first patrol (28 January–2 February) in Azorean waters. She was patrolling between Ponta Delgada and Horta, Fayal, Azores against German U-boats and surface raiders with the purpose of denying the use of the archipelago as an operational haven by the Germans. During this time, E-1 served as the flag boat for Division Four [K-1 (Submarine No. 32); K-2 (Submarine No. 33) and K-6 (Submarine No. 37)]. She conducted two patrols during February as well as spending time in port at Horta (17–23 February) before undergoing overhaul at Ponta Delgada (1–7 March). Departing for Horta on 8 March, she spent the following weeks conducting patrols. On 27 May, an enemy submarine was reported 10,000 yards off the harbor entrance to Ponta Delgada, E-1 was dispatched but her search proved inconclusive. She underwent another overhaul (3–7 June) and then reported battery problems on 8 July after conducting her patrols. Later, on 28 August, she again reported battery trouble and the next day it was determined that she could not have a replacement installed at Base No. 13 and would have to return to the U.S.

E-1 departed Ponta Delgada on 4 September 1918 in tow of Machias (Gunboat No. 5) and having passed through a hurricane, made her return to New London (Base No. 22) where she secured alongside Pier H at 8:00 p.m. on 17 September. E-1 received orders transferring her to Submarine Division Two on 26 September. During her post-deployment overhaul, the Armistice ending the war went into effect on 11 November. E-1 got underway and visited the Norfolk Navy Yard, Portsmouth, Va., on 2 December. She then returned to New London where she spent the following months training new submariners and testing experimental listening gear.

E-1 was placed in commission in reserve on 20 March 1920, and returned to the Norfolk Navy Yard on 22 April. During this time, on 8 April, she was detached from Submarine Division Two and transferred to Submarine Division Five with E-2 (Submarine No. 25) and M-1 (Submarine No. 47). She was re-classified SS-24 on 17 July 1920 as part of a Navy-wide administrative re-organization, shortly after she conducted training out of Annapolis (7–14 July). Back at Norfolk, she was placed in commission in ordinary on 18 July 1921, and on 17 September she proceeded with E-2 to the Philadelphia (Pa.) Navy Yard, where she was decommissioned on 20 October 1921 and ordered sold on 5 November 1921.