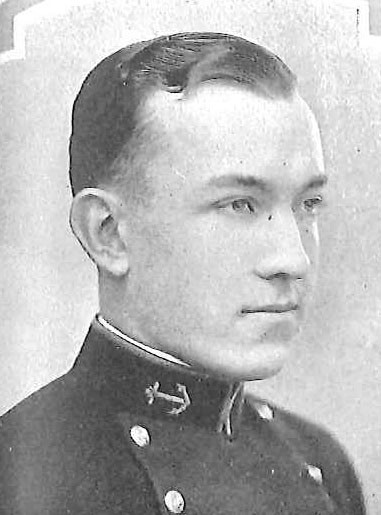 Cecil Thilman Caufield was born in Waco, Texas, on November 20, 1903, son of Thomas A, and Laura Marshall (Hendricks) Caufield, both now deceased. He attended Waco High School and Baylor University at Waco for two semesters prior to his appointment to the US Naval Academy, Annapolis, Maryland, from the Eleventh District of his native state in 1923. As a Midshipman he participated in Class basketball. Graduated and commissioned Ensign on June 2, 1927, he subsequently advanced in rank, attaining that of Captain, to date from March 15, 1945.

Following graduation from the Naval Academy in 1927, he joined USS New York, and while attached to that battleship had two tours of temporary duty (1928 and 1930), with the Nicaraguan Electoral Commission. Detached from the New York on December 1930, he reported as Gunnery Officer and First Lieutenant on board USS William B. Preston. When the “Rotating Reserve” replaced that vessel with the MacLeish in September 1932, he was assigned to the latter to serve until May 1933. After service in USS Bushnell (old), flagship of Commander Submarine Force, United States Fleet, he continued duty afloat as Gunnery and First Lieutenant of USS Wickes.

He was an instructor in Spanish in the Department of Modern Languages at the Naval Academy, between June 1935 and June 1938, after which he severed on China Station. He served first in USS Monocacy at Kiukiang until the vessel was brought down river and decommissioned, and in February 1939 reported as Executive Officer of USS Edsall. He returned to the United States as Assistant Gunnery Officer of USS Augusta in December 1940, and in February 1941 assumed command of USS Fox, which under his command participated in escort operations in the Aleutians, after the United States entered World War II, December 8, 1941.

Ordered to the Bethlehem Steel Company, San Pedro, California, he had fitting out duty in USS Kendrick from May 1942 until that destroyer was commissioned on September 12, 1942, at which time he assumed command. Under his command, the Kendrick operated on escort duty in the Atlantic and later took part in the invasion of Sicily. While the Kendrick was escorting a convoy in the Mediterranean, she sustained a torpedo hit in the stern while beating off a German air attack. Temporary repairs were effected in Oran and the Kendrick was towed across the Atlantic, arriving at Norfolk in November 1943. He was awarded the Silver Star Medal and also received a Letter of Commendation with authorization to wear the Commendation Ribbon, from the Secretary of Navy. The citations follows in the order of the action for which they were awarded:

Letter of Commendation: “For heroic performance of duty as Commanding Officer of the USS Kendrick during the amphibious assault on the Island of Sicily from July 9 to 13, 1943. Engaged in anti-submarine patrol and anti-aircraft defense of the transport anchorage off Scoglitti, Sicily, Lieutenant Commander Caufield expertly maneuvered and fought his ship, providing such strong protection against attack that all assault troops and cargo were disembarked expeditiously…”

Silver Star Medal: “For conspicuous gallantry and intrepidity… in combat against enemy German aircraft during escort of convoy operations on September 2, 1943. When a hostile torpedo bomber severely damaged his ship, Commander Caufield, by his superb seamanship and great courage, kept his vessel on station in the convoy, and, with the assistance of his well-trained officers and men, fought off the enemy, destroying one torpedo plane. Although the stern of the Kendrick was demolished and compartments were flooded, he maintained further protection to valuable units of the Allied Fleet and succeeded in bringing his ships safely to port under her own power…”

Detached from command of the Kendrick in November 1943, he was ordered to the Seattle-Tacoma (Washington) Shipbuilding Corporation, where he was in charge of fitting out USS Pritchett. He assumed command of that destroyer upon her commissioning, January 15, 1944. Under his command, the Pritchett reported for duty with Task Force Fifty Eight participating in the second Truk strike, the bombardment of Ponape and the Marianas Campaign. Operating later with Task Force Thirty Eight, the Pritchett took part in the initial Philippine Strikes, the Palau campaign, and strikes against Luzon, Nansei Shoto and Formosa. She sustained damage during the air attacks off Formosa, and retired to Manus for repairs in October 1944. For outstanding services as Commanding Officer of the USS Pritchett, he was awarded the Bronze Star Medal and a Gold Star in lieu of a second similar award, each with combat “V” The citations follow in part:

Bronze Star Medal: “For meritorious service as Commanding Officer of a United States Ship attached to Destroyer Squadron Fifty Six during the assault and capture of enemy Japanese-held islands, during June and July 1944. Cool and capable in directing the delivery of accurate and effective gunfire from his ship, (he) rendered valuable assistance in the destruction of enemy troops and shore installations and thereby contributed materially to the success of the landing operations…”

Gold Star in lieu of the Second Bronze Star Medal: “For meritorious achievement… during offensive operations against enemy Japanese forces in the Palau’s, Philippines, Philippine Sea and at Formosa, from August 30 to October 15, 1944. Maintaining his ship at the peak of efficiency throughout this critical period, (he) contributed in large measure to the safety of our heavy combat units, skillfully protecting them from attack by enemy submarine or aircraft and directing accurate gunfire against several intercepting hostile planes which were probably destroyed…”

In November 1944 he reported as Executive Officer of the West Coast Sound School, San Diego, California, and in September 1945 assumed command of that school, now known as the US Fleet Sonar School. For a year, July 1947- July 1946, he commanded USS Yancey, after which he had duty in the Undersea Warfare and Shipping Control Division, Office of the Chef of Naval Operations, Navy Department, Washington, DC. He remained there until July 1950, and the next month became Commander Escort Patrol Squadron Five.

He was a member of the Pacific Fleet Evaluation Group from October 1950 until May 1951, followed by instruction at the Naval War College, Newport, Rhode Island. Completing the course there in June 1952, he remained for duty on the staff until April 1953, when he reported as Commander Destroyer Squadron Twenty. In April 1954 he joined the staff of Commander Destroyer Force, US Atlantic Fleet, as Chief of Staff and Aide, and continued to serve in that capacity until August 1955, when he became Commander Naval Training Center, San Diego, California.