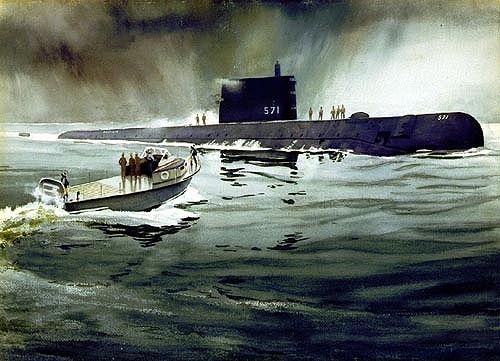 He had exhibited at the Corcoran Gallery, National Academy, Art Association of Newport and Society of Four Arts, Palm Beach. He was represented in the permanent collection of Lafayette College, Syracuse University, US Naval Academy, Union Club, New York, and in many private collections.

Commander Murray was commissioned Lieutenant (jg) in the US Naval Reserve on 6 March 1942, and was attached to the Inshore Patrol, based at the Naval Section Base, Port Everglades, Florida, where he had duty with anti-submarine warfare. In September 1942 he was transferred to the Office of Public Relations, Navy Department, Washington, DC. Assigned to the Combat Art Section at the time of its formation, as a combat artist to paint naval activities for both Public Relations use and for the Navy's historical record, he had served continuously therein, with additional duty as combat artist and/or deck duties.

A well known portrait painter before the war, one of Commander Murray's first assignments was to paint portraits of the members of the Navy's General Board. He next executed a lively series of charcoal and oil portraits of some of the outstanding heroes of the USS Boise, after that vessel had returned to the United States for badly needed repairs. He painted her keen-eyed, Irish-looking skipper, Captain "Mike" Moran, USN; the ship's surgeon, Lieutenant Commander Edward Kenney, under whose care all living casualties were nursed to recovery; the gunner's mate, communications officer, damage control officer, and a number of enlisted men, all heroes in a common cause, typifying American courage at its best.

About this time Commander Murray also painted a spirited and dramatic portrait of Navy Nurse Ann Bernatitus, a heroine of Bataan and first woman recipient of the Legion of Merit.

On 27 March 1943, Commander Murray was ordered to the Caribbean and South Atlantic, where he painted the varied naval activities of those areas, including anti-submarine patrol by surface and air, PC convoy duty, Lend-lease construction and other activities connected with the war.

From the Fourth Fleet in the South Atlantic, covering the Caribbean area, Commander Murray was ordered to the Eight Fleet in North African waters on 6 June 1944. He covered the training preparations of the Joint Army and Navy amphibious groups in Italy and participated in the Riviera Invasion of Southern France, 15 August 1944, going ashore among the early assault waves. He covered activities along the beachheads during the day, and was with the PTs and fire support groups at night. He had duty as a combat artist aboard transports, cruisers, LSTs, PT boats, and with a Navy beach battalion. He entered and recorded some of the street fighting in Toulon before that city capitulated, and was with the Special Service Forces pressing toward the Italian frontier.

In the Italian sector, when exposed upon a hill while painting a scene of ships fighting shore batteries, he had the unique experience of drawing five rounds of fire from a German 88. His paintings of this operation show the many-sided activities involved, with special emphasis on beach defenses, and amphibious craft and the officers and men who manned them. For meritorious achievement from 21 April 1943 to 1 May 1945, he was awarded the Bronze Star Medal, and cited as follows:

Bronze Star Medal - Combat "v".
"For meritorious achievement as a Combat Artist in the European Theater of War from April 21, 1943, to May 1, 1945. Combining superior professional skill with exceptional courage, ingenuity and industry to paint vivid and dramatic eye-witness scenes of major war operations, Commander (then Lieutenant Commander) Murray voluntarily exposed himself to enemy shelling and air attacks to carry out his hazardous and exacting assignments aboard ships and planes engaged in convoy duty, anti-submarine warfare and air-sea rescue work. Landing with the first assault units in the Riviera Invasion of France and serving with Special Service Force patrols along the France-Italian border, he succeeded in preserving an extremely valuable and unique pictorial record of all phases of these operations, including the destruction of shipping glider bombs, enemy beach defenses, road blocks and street fighting in Toulon prior to its liberation and contributed materially to the outstanding success of the Navy's Public Information Section in the prosecution of the war. His valiant conduct throughout these perilous missions reflects the highest credit upon Commander Murray and the United States Service."

Returning to the United States after two years at sea and abroad, Commander Murray was ordered to execute for the record a series of portraits of some of the Navy's distinguished officers whose activities contributed heavily toward the early successful conclusion of the war. After the cessation of hostilities and on eligibility for discharge he was persuaded to remain for an official portrait group for the proposed war museum.

Commander Murray was also the Officer in Charge of Combat Art Section of Public Relations, charged with handling and exhibition of combat art material. He conceived and put on the road a tour of combat art called "Operation Pallette." He attained his last rank on 3 October 1945.