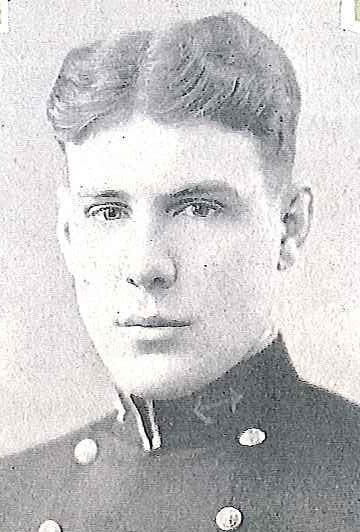 Rear Admiral Eddy was born in Saratoga Springs, New York, May 16, 1904. He graduated from Saratoga High School and New York Military Academy prior to entering the US Naval Academy, Annapolis, Maryland, with the class of 1927. He was active especially in football and crew while attending the two academies, and was graduated and commissioned Ensign on June 2, 1927. He was selected for promotion at regular intervals until commissioned Commander in June 1942. During and since the War he has served in the rank of Captain and retired on February 1, 1949 in the honorary rank of Rear Admiral.

Upon leaving the Academy, Captain Eddy's first duty assignment was in USS Wyoming, flagship of the Scouting Fleet, employed in the Atlantic. Later he chose the submarine service, and was ordered to the Submarine Base, New London, Connecticut in 1929, under instruction and attached to USS S-19.

He next had duty in various submarines, of Submarine Divisions, Battle Fleet, and the Submarine Force, US Fleet, based on Pearl Harbor, Territory of Hawaii, until the summer of 1935. He then returned to the Postgraduate School, Annapolis, Maryland, under instruction. He completed courses of instruction in Marine Engineering in Submarines and in chemical warfare, and the following summer, 1936, went aboard the S-23, attached to Submarine Division 8, and remained in that assignment until late in 1939. He was then ordered to USS California for duty as Aide and Flag Lieutenant on the staff of Commander Battle Force, and transferred in June 1940 to similar duty on the staff of Commander-in-Chief, US Fleet, USS Pennsylvania, flagship.

Early in May 1941, Rear Admiral Eddy returned to the Submarine Base, Pearl Harbor, for duty ashore, and was so attached when the Japanese attack on Pearl Harbor precipitated entrance of the United States in World War II. He served as Engineering and Repair Officer at that Base until July, 1943, and was awarded the Legion of Merit "for exceptionally meritorious conduct in the performance of outstanding services to the Government of the United States as Engineering and Repair Officer of the U.S. Submarine Base, Pearl Harbor, TH., from May 9, 1941 to July 2, 1943, and as Engineering Officer of Submarine Squadron 4 from July 2, 1943 to January 1, 1945…."

In March 1945, Rear Admiral Eddy went aboard USS Wisconsin as Executive Officer. For his services in that assignment he was presented the Bronze Star Medal with the following citation:

"For meritorious service as Executive Officer of the USS Wisconsin in action against enemy Japanese forces in the Pacific War Area from March 21 to August 14, 1945. Maintaining a high state of morale and combat efficiency in the ship's company, Captain Eddy rendered valuable assistance to his commanding officer during sustained operational periods. His courageous leadership and devotion to duty were in keeping with the highest traditions of the United States Naval Services."

Rear Admiral Eddy reported in November 1945 to the Bureau of Naval Personnel, Navy Department, Washington, DC, for temporary duty until January 1946, when he was assigned duty under the Deputy Chief of Naval Operations in Personnel, with additional duty, the following July, as the Navy member of the Committee on Human Resources, of the Joint Research and Developments Board. He was also one of five Naval and Marine Corps officers who departed on June 8, 1948 as observers in the Palestine truce efforts. He later served as Legislative Liaison Officer to the Board on Decorations and Awards, prior to his retirement which was effective on February 1, 1949.