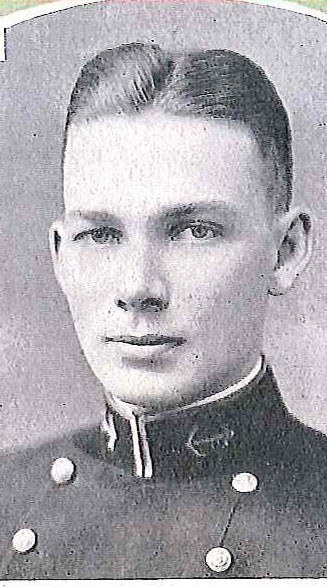 Born in Baltimore, Maryland, Charles Kniese Bergin attended the Baltimore Polytechnic Institute and Johns Hopkins University, prior to entering the Naval Academy in 1923. Following graduation in 1927, he had seven years’ duty afloat in the battleship Maryland, the destroyers Gilmer and Blakely and in the destroyer tender Dobbin. In 1937 he completed a course in ordnance engineering at the Postgraduate School, Annapolis, Maryland and subsequently served as Gunnery and Executive Officer of USS Ralph Talbot and later as Assistant Operations and Gunnery Officer on the Staff of Commander Destroyers, US Pacific Fleet.

At the outbreak of World War II, he was engaged in research, development and service test of ordnance as Experimental Officer at the Naval Proving Ground, Dahlgren, Virginia. Ordered to duty afloat in 1944, he commanded USS Monssen, participating in operations at Saipan, Marcus Island, Palau Island, and the Leyte landings. He was awarded the Navy Cross for extraordinary heroism during the Battle of Surigao Straits, October 24-25, 1944. Continuing service in the Pacific, he commanded Destroyer Division ONE HUNDRED TWENTY-TWO, a radar picket group off Okinawa, until after the cessation of hostilities. Later in 1945 he became Assistant Chief of Staff for Plans and Operations on the Staff of Commander FIFTH Amphibious Force, with duty in connection with the occupation of Japan.

Between 1946 and 1949 he was Project Coordinator on the Staff of Commander Operational Development Force and, as such, directed all departments in conducting evaluation of new technical developments and new concepts of tactics. He was Program Director for Gun Systems in the Planning Division, Bureau of Ordnance until 1951, during which time he completed a course in advanced management at the Harvard Graduate School of Business Administration.

Following instruction at the National War College, Washington, DC, he assumed command in 1952, of USS Des Moines, which operated as flagship of Commander SIXTH (Mediterranean) Fleet during NATO exercises “MAINBRACE” and “LONGSTEP.” He was Assistant Chief of the Bureau of Ordnance for Research from the summer of 1953 until December 1955, after which he served as Commander Destroyer Flotilla THREE and Commander Destroyer Flotilla ONE. He was Director, Near East, South Asia and Africa Region, Office of the Assistant Secretary of Defense (International Security Affairs), Washington, DC, from December 1956 until April 1959, when he assumed command of Mine Force, Pacific Fleet.

In August 1960 he became Commander Operational Test and Evaluation Force, and in August 1963 reported as Superintendent of the US Naval Postgraduate School, Monterey, California. He was serving in that assignment at the time of his death, December 6, 1964, at the US Army Hospital, Fort Ord, California.

Navy Cross: “For extraordinary heroism as Commanding Officer of the USS Monssen in action against major units of the enemy Japanese Fleet during the Battle of Surigao Strait, Philippine Islands, October 24 to 25, 1944. When United States destroyer units deployed in a flanking maneuver as tactically disposed PT boats opened fire on a formidable column of Japanese battleships, cruisers and destroyers advancing under cover of darkness towards our waiting force, (he) placed the Monssen in an advantageous striking position within close range of the enemy force. Although silhouetted by the illuminating glare of star shells, and under hostile fire, he launched his torpedoes with precise timing in the second coordinated attack thereby rendering the enemy vulnerable to the smashing blows of our heavy naval units. Subsequently retiring without damage from the furious engagement which resulted in the sinking of two Japanese battleships and three destroyers before effective return fire could be brought to bear upon our Task Force, Bergin, by his forceful leadership, professional ability and determination in the face of tremendous odds, contributed materially to the decisive defeat of the enemy force…”

Bronze Star Medal: “For meritorious achievement as Commander of Destroyer Division ONE HUNDRED TWENTY-TWO, in action against enemy Japanese forces in the Western Pacific War Area from March 14 to April 30, 1945. Skillfully directing his division during numerous combat operations against the enemy (he) contributed materially to the destruction of eight enemy planes…”

Letter of Commendation: “For distinguishing himself by meritorious achievement in connection with operations against the enemy on March 18-19, 1945, while serving as a Commander of a Destroyer Division in the Western Pacific. While three ships of his command were acting as part of a screen for a Carrier Task Group, the formation was under heavy enemy air attack for nearly thirty-six hours. During this period, a total of ten planes were shot down by ships of the Task Group…”