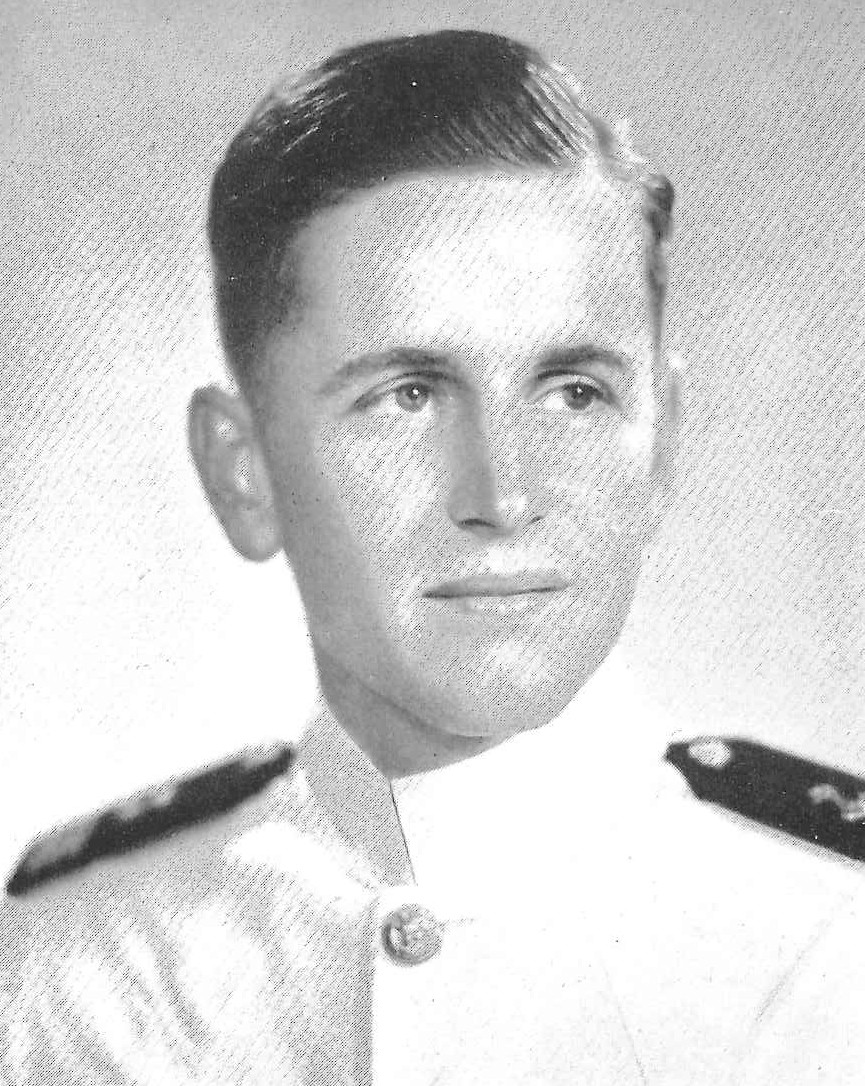 William Ballard Barrow, Jr., was born in Louisburg, North Carolina, on September 30, 1921, son of William B. and Mamie J. (Jones) Barrow, both now deceased.  He attended Mills High School in Louisville and the Marion (Alabama) Military Institute, prior to entering the US Naval Academy, Annapolis, Maryland, on appointment from his native in 1940.  Graduated with the Class of 1944 on June 9, 1943 (accelerated course due to World War II), he was commissioned Ensign on that date and subsequently advanced in rank to that of Captain, to date from June 1, 1964.

Following graduation from the Naval Academy in 1943, he joined the USS Washington (BB-56) and while on board that battleship participated in the Gilbert Islands, Marshall Island, Marianas, Western Caroline, Leyte and Luzon operations.  Detached from the Washington in January 1945, he next had flight training at various air installations and in June 1946 was designated Naval Aviator.  He then joined the USS Franklin D. Roosevelt (CVA 42) to serve as a Squadron Pilot and Landing Signal Officer until September 1949, when he reported as a Project Pilot in the Flight Test Division, Naval Air Test Center, Patuxent River, Maryland.

In February 1952 he joined Fighter Squadron Eleven to serve as Gunnery and Operations Officer until September 1953.  For meritorious conduct in that assignment in the Korean area of hostilities, he was awarded the Air Medal with Gold Star in lieu of the Second, Third and Fourth similar awards.  Returning to the United States, he had duty as Safety and Fighter Squadron Training Officer on the Staff of Commander Fleet Air, Jacksonville, with headquarters at the Naval Air Station, Jacksonville, Florida, until September 1955, after which he had duty as Carrier Accident Analyst at the Naval Aviation Safety Center, Norfolk, Virginia.  In January 1959 he assumed command of Attack Squadron TWELVE and after instruction at the Naval War College, Newport, Rhode Island, reported in June 1961 as Commanding Officer of Attack Squadron FORTY-FOUR.  Assigned in May 1962 to the USS Forrestal (CVA-59), he served as Navigator and Operations Officer until September 1963.

He headed the Sea-Based Air Strike Forces Section, Office of the Chief of Naval Operations, Navy Department, Washington, DC, until 1966, then assumed command of the USS Aludra (AF-55).  In July 1967 he reported as Officer in Charge of SEVENTH Fleet Staff Detachment CHARLIE, with headquarters at Ton Son Nhut Air Force Base, Saigon, Republic of Vietnam.  In December 1968 he reported as Commanding Officer of the USS Bennington (CVS-20) and in November 1969 was detached for duty in the Office of Information, Navy Department.