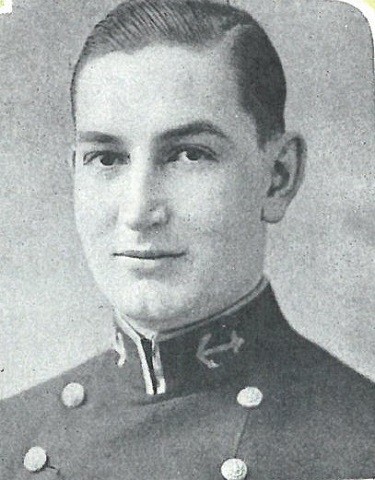 Harold Maurice Zemmer, born in Kansas City, Kansas, on 17 January 1904, was graduated from high school in Bonner Springs, Kansas and attended Kansas University before entering the US Naval Academy, Annapolis, Maryland, from his native state on 3 July 1923. He was graduated and commissioned Ensign on 2 June 1927 and through subsequent promotions attained the rank of Captain, to date from 20 March 1945.

Upon graduation from the Naval Academy, he assumed duties as a junior officer in the Gunnery Division of the battleship USS Arizona. In June 1928 he was transferred to the destroyer USS Peary in the Asiatic Fleet, and in 1931 returned to the United States for duty on the staffs of Commander Battle Force and Commander in Chief, US Fleet, as Assistant Fleet Communication Officer.

In June 1934 he returned to the Naval Academy as a student at the Naval Postgraduate School and, after completing postgraduate studies, he served for two years as an Academy instructor in Chemistry, Electrical Engineering and Physics. Returning to sea in June 1937, he assumed duties in the repair ship USS Medusa as Engineering Repair Officer, then in June 1939 was assigned duties in the Gunnery Department of the battleship USS New Mexico. From the latter, he assisted in commissioning the battleship USS North Carolina, later serving as her Gunnery Officer.

In July 1943 he reported to the Navy Department, Washington, DC, for duty at the Headquarters of the Commander in Chief, US Fleet. In this assignment he received the Legion of Merit “For exceptionally meritorious conduct in the performance of outstanding services…” while serving in the Readiness Division.

The citation accompanying the Legion of Merit reads in part:  “…Captain Zemmer rendered invaluable service by assisting in the formulation of training policies for all Fleet and other training activities, and the procurement of training equipment. By his detailed knowledge of the gunnery requirements of the Fleet, his sound judgment and his initiative, he was directly instrumental insuring that such requirements were met, and that the United States Fleet retained its superiority over the enemy, thereby contributing greatly to the successful prosecution of the war.”

From January 1946 to April 1947, Captain Zemmer successively commanded the attack transport USS Clarendon (APA 72) and the oiler USS Merrimack (AO 37). His next duty was that of Operations and Training Officer on the staff of Commander Battleships-Cruisers, Pacific Fleet, serving in that assignment until August 1949 when he reported to the Navy Department for duty as Special Services Officer in the Bureau of Naval Personnel.

Completing duty in Washington in November 1950, he next assumed duties as Chief of Staff and Aide to Commander, Naval Base, Norfolk, Virginia. In January 1953 he assumed command of Destroyer Squadron FIFTEEN, and on 31 December 1953, was ordered to report to the staff of Commander Naval Forces Marianas as Inspector General.

In October 1955 he received orders to assume duties as Commanding Officer of the US Naval Communication Station, San Francisco, California.

Captain Zemmer was married to the former Georgia Lee Walker of Springfield, Missouri. He passed away 18 February 1978.