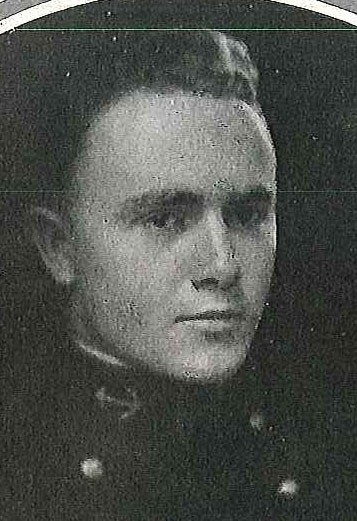 Ralph Judd Arnold was born in Garden Grove, Iowa, on July 6, 1902, son of Harry Guy and Mrs. Mable (Judd) Arnold. He attended Garden Grove High School before entering the US Naval Academy, Annapolis, Maryland, on appointment from his native state in 1919. Graduated and commissioned Ensign on June 8, 1923, he advanced to the ran[sic] of Lieutenant, to date from April 1, 1931. He was transferred to the Supply Corps of the US Navy on September 20, 1935 in the grade of Passed Assistant Paymaster with the accompanying rank of Lieutenant, and thereafter progressed in grade to that off Rear Admiral to date from July 1, 1949.

Following graduation in 1923, he was assigned for a year to USS California, after which he had duty on the staff of Commander Battle Fleet. In June 1925 he was ordered to the Naval Air Station, Pensacola, Florida, for flight training. While under instruction at Pensacola, he was commended by the Secretary of Navy in April 1925, for working cryptography during the fleet maneuvers. From April 1926 to September 1927 he served in USS Brazos, and upon detachment from that vessel, reported to the Fore River Shipbuilding Company, Quincy, Massachusetts, to assist in the fitting out of USS Lexington. He joined that carrier upon her commissioning, December 14, 1927, and in May 1930 returned to the Naval Air Station, Pensacola, Florida, for six months instruction. Completing his instruction, he remained there for duty from February 1931 until April 1932.

Between May and September 1932 he had duty in connection with the fitting out of USS Lapwing at the Navy Yard, Pearl Harbor, Territory of Hawaii, and upon her commissioning, September 1, 1932, assumed command. He was detached from command of that seaplane tender in July 1935. Following his transfer to the Supply Corps, he attended the Navy Finance and Supply School, Philadelphia, Pennsylvania. In May 1936 he became Assistant to the Supply Officer at the Naval Aircraft Factory, Navy Yard, Philadelphia, Pennsylvania, and six months later was transferred to duty in the same capacity at the Naval Air Station, San Diego, California.

“For extraordinary heroism as Supply Officer of USS Yorktown in preparation for, during, and after action against enemy Japanese forces on June 4, 1942, and in the attempted salvage of that ship on June 6, 1942…(he) contributed greatly to the maintenance of material readiness of the Yorktown and her Air Group. In the Battle of Midway, he voluntarily served in the ammunition supply of a 5-inch gun and, during abandonment of the Yorktown, demonstrated excellent organizing ability in directing personnel over the side. Later, in his tireless efforts to set up a commissary department for subsisting the salvage crew on board, while the ship was in d precarious condition, I(he inspected) lower deck compartments adjacent to those which had been flooded. When the USS Hammann was torpedoed he made himself personally responsible for rescuing two members of her crew and later worked zealously in transferring wounded from the Yorktown to a tug alongside… on June 6, 1942…”

He also received a Letter of Mommendation with authorization to wear the Commendation Ribbon with Combat “V,” from the Commander in Chief, US Pacific Fleet, for distinguished service as Supply Officer on the staff of Commander Fleet Air, South Pacific. He had further staff duty with Commander Sircraft, South Pacific Force, from Jubne to October 1944, and for “meritorious service as Supply Officer (on the latter staff)… during that period” he was awarded the Bronze Star Medal. This citation states further:

In November 1944 he reported as Supply and Accounting Officer at the Naval Air Training Base, Pensacola, Florida. He was assigned in October 1945 to the Office of the Secretary of Navy, navy Department, Washington, DC, and from January to December 1946 served as Navy Member of the Army and Navy Munitions Board, with additional duty in the Office of the Secretary of Navy. Thereafter, until January 1948, he served as officer in Charge of the Stock Office at the Naval Gun Factory, Washington, DC, He reported for duty in the Bureau of Supplies and Accounts, Navy Department, and in October 1948 became Assistant Chief of that Bureau for Material and Supply. On April 17, 1951 he reported for duty as Aviation Supply Officer, and Commanding Officer, Naval Aviation Supply Depot, Philadelphia, Pennsylvania.