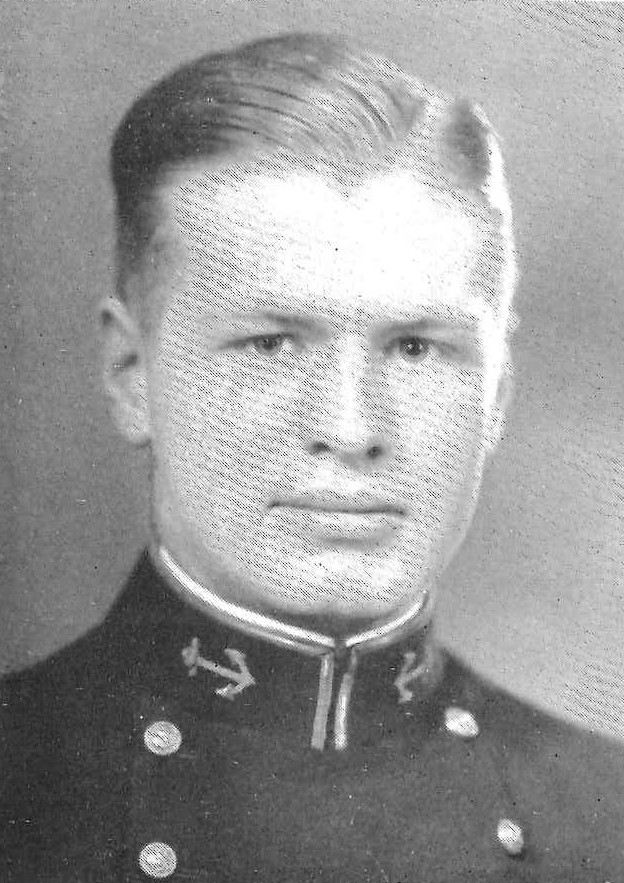 Christopher Sylvanus Barker, Jr., was born in Trenton, North Carolina, on September 7, 1911, son of Dr. C.S. Barker, Sr., and Mrs. Ruth Jane (Henderson) Barker.  He attended New Bern, North Carolina, High School, and entered the US Naval Academy on appointment from his native state on July 29, 1928.  As a Midshipman he was a member of the wrestling team, and was manager of the baseball team for three years.  He was graduated on June 1, 1933, and commissioned Ensign in the US Naval Reserve.  He transferred to the US Navy in July 1934, and through subsequent promotions attained the rank of Captain, his date of rank July 1, 1952.

Beginning his active duty aboard the USS Pensacola at Newport, Rhode Island, in July 1934, he served aboard that cruiser, a unit of Cruiser Division 4, Scouting Force, until October 1938.  Service at sea continued during the period prior to and following the United States’ entry into World War II, with successive duty in the USS Minneapolis, flagship of Cruiser Division 6, Scouting Force; USS Smith, operating with Destroyer Squadron 2, Battle Force; USS Yarnall, of Destroyer Squadron 30, Atlantic Squadron; and the USS Wichita (CA 45), a unit of the Atlantic Fleet.

Detached from the Wichita in February 1942, he was ordered to the USS Courage (PG 70), and commanded that patrol craft from April 3 of that year until April 1943.  In May and June he had instruction at the Submarine Chaser Training Center, Miami, Florida, after which he assisted in fitting out the USS Stanton, which he commanded from her commissioning, in August 1943, until January 1944.  The next month he was ordered to the Eighth Naval District for duty as Commanding Officer of the USS Edmonds (DE 406), and served as such for eight months.

He was awarded the Legion of Merit with Combat “V,” for “exceptionally meritorious conduct…as Commanding Officer of the USS Edmonds during operations against enemy Japanese forces in the Pacific War Area from September 10 to October 2, 1944…”  The citation states that he “contributed materially to the success of his escort carrier group in operations against hostile shore installations and air power…”

Reporting in December 1945 to the Naval Reserve Officers Training Corps Unit of Princeton University, Princeton, New Jersey, he served as an instructor there until June 1948.  For eighteen months thereafter he had sea duty in command of the USS Bristol (DD857).

He next served from January 1950 to March 1952 as Assistant Director of Naval Reserves, at Headquarters Third Naval District, New York, New York.  In April 1952 he became Commanding Officer of the USS Caloosahatchee (A0 98), and under orders of April 23, 1953, he will report for duty as Operations and Plans Officer on the Staff of Commander, Atlantic Reserve Fleet.