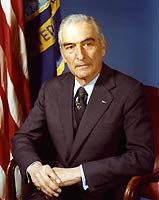 He served as a law clerk to the Second Circuit Court of Appeals in 1936 and 1937, and was an associate with the law firm of Wright, Gordon, Zachry & Parlin (Cahill, Gordon & Reindel) from 1937 to 1942. From 1942 to 1943, he was assigned to the State Department as legal adviser to the US Ambassador to the Emergency Advisory Committee for Political Defense in Montevideo.

From 1943 to 1945 he served as an air combat intelligence officer on the carrier Enterprise, and he was a member of the Eberstadt Committee which reported to the Secretary of the Navy on Unification of the Military Services in 1945. He received the Bronze Star for his services aboard USS Enterprise and a Commendation Ribbon for his service with the Eberstadt Committee. In 1945 and 1946 he served as Special Assistant to the Secretary of the Navy, James Forrestal.

From 1946 to 1948, Mr. Hidalgo was a partner of the law firm of Curtis, Mallet-Prevost, Colt & Mosle, in charge of their México City office. He was founder in 1948 and a senior partner until 1965 in the México City law firm of Barrera, Siqueiros & Torres Landa.

From 1965 to 1966, Mr. Hidalgo was Special Assistant to the Secretary of the Navy, Paul H. Nitze, and from 1966 to 1972, he was a partner in the law firm of Cahill, Gordon & Reindel, in charge of their European office. In 1972 he served as Special Assistant for Economic Affairs to the Director of the US Information Agency, and in 1973 he became General Counsel and Congressional Liaison of the Agency.

On 13 September 1979, President Jimmy Carter announced he would nominate Edward Hidalgo to be Secretary of the Navy. Mr. Hidalgo was confirmed by the Senate on 19 October and took the oath of office on 24 October 1979. He previously had served, since 25 April 1977, as Assistant Secretary of the Navy (Manpower, Reserve Affairs and Logistics).

Mr. Hidalgo was a member of the US Delegation to the Inter-American Conference in Bogotá, República de Colombia, in 1948. He had received the Royal Order of the Vasa for legal services to the Swedish Government. He is the author of "Legal Aspects of Foreign Investments" (published in México) (1958).