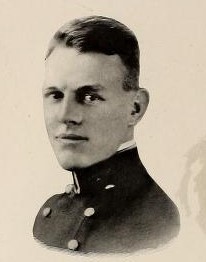 James George Atkins was born in Plattsburg, New York, On May 26, 1887, a son of the late Mr. and Mrs. William Garret Atkins. He attended Central High School in Madison, Wisconsin before enlisting in the US Navy in 1913. After two years of enlisted service, he entered the US Naval Academy from Wisconsin in 1915, and was graduated and commissioned Ensign in June, 1918 with the Class of 1919. He was subsequently promoted through the various grades, attaining the rank of Captain to date from June 17, 1942. He was transferred to the Retired List of the Navy in the rank of Rear Admiral on June 30, 1949.

After graduation from the Naval Academy, he went overseas immediately, and served in destroyers the last several months of the war. Duty in destroyers continued until 1921. In 1920 he received a Commendation from the Secretary of the Navy, Josephus Daniels, for risking his life in the rescue of two men washed overboard at sea. He was next ordered to the Submarine Base, New London, Connecticut for duty under instruction, and subsequently had duty in submarines for two years, and qualified for command of submarine. In 1923, he was assigned to duty in connection with commissioning of the USS Colorado, and served aboard her for two years thereafter. He was then ordered to the Bethlehem Shipbuilding Corporation, Quincy, Massachusetts, in connection with the building and commissioning of the aircraft carrier Lexington. He then had duty aboard from her commissioning date until late in 1928. He reported at that time to the Naval Air Station, Pensacola, Florida, to serve as Instructor.

Returning to submarine duty in the summer of 1929, he was attached to the USS V-4, and later of the V-6, both of Submarine Division 20, Battle Fleet. In 1931-32 he assisted in commissioning the USS Nautilus, and served consecutively in the Nautilus and in the Argonaut. In June, 1932, he returned to shore duty as Aide to the Commandant, Navy Yard, Mare Island, California, where he served for a year. Again ordered to sea, he served or three years as Flag Lieutenant on the staff of Commander, Battle Force (the late Admiral Joseph M. Reeves, USN), followed by similar duty on his staff when he was named Commander in Chief, US Fleet.

In June, 1936 he served as Navigator of the USS Chester and for a year thereafter. He then served a two year tour of duty as Instructor in the Naval Reserve Officers Training Corps Unit of the University of Washington, at Seattle. In June, 1939 he assumed command of the USS Oglala, flagship of Minecraft, Battle Force, at Pearl Harbor, T.H., and was in that duty until February, 1941, when he transferred to the heavy cruiser New Orleans for duty as Executive Officer. H was aboard the New Orleans at Pearl Harbor in the Japanese attack of December 7, 1941, and also at the Battle of Coral Sea and the later Battle of Midway.

Back to the Continental area in August, 1942, he commissioned the US Naval Training Station, Farragut, Idaho in October of that year, and remained as Executive Officer of that Station, later as Acting Commandant until September, 1944. During that period of duty he received, in May, 1943, an honorary degree of Doctor of Engineering from the University Of Montana School Of Mines. When detached from that assignment in September, 1994, he was ordered as Commanding Officer of the USS Tuscaloosa for combat operations in the Asiatic area. In that command he participated in the operations against Iwo Jima and Okinawa, and was awarded a Legion of Merit with Combat “V”  “For exceptionally meritorious conduct… as Commanding Officer of the USS Tuscaloosa during operations in support of the assault and occupation if Iwo Jima from February 16 to March 7, 1945, and of Okinawa from march 25 to May 1, 1945…”

The following February, 1946, he became senior US Naval Liaison Officer, South East Asia, and in February, 1947 assumed duty as the US Naval Attaché, American Embassy, new Delhi, India. He returned home under orders of April 12, 1948, and reported to the Officer of the Chief of Naval Operations, Navy Department, Washington, DC, where he had duty in the office of Naval Intelligence. He was so serving when relieved of all active duty pending his retirement.

In addition to the Legion of Merit, Admiral Atkins has the Mexican Service Medal, the Victory Medal (World War), the American Defense Service medal, the American Campaign Medal; the Asiatic-Pacific campaign Medal with Silver Star for five engagements, the Philippine Liberation Ribbon; and the World War II Victory Medal. He also has the Expert Rifleman’s and Expert Pistol Shot medals.