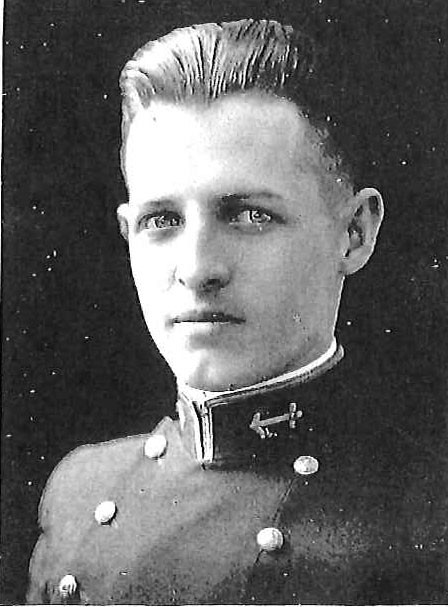 Captain Becker was born in Bartlett, Texas, on October 1, 1898, the son of Robert and Emma (Hodde) Becker. He attended Taylor High School and Texas Agricultural and Mechanical College before entering the US Naval Academy, Annapolis, Maryland, on appointment of the Honorable J. P. Buchanan, Member of Congress from Texas, on July 30, 1918. While at the Academy, he was a member of the Fencing Squad, winning the Block N in 1920-1921, and winning the Academy Championship, Second Place in 1920 and first place in 1921. He was Captain of the Navy Fencing Team in 1921-1922, and was Midshipman Director of the YMCA during the same period. Graduated and commissioned Ensign on June 3 1922, he advanced progressively to the rank of Captain to date from April 1, 1943.

Following graduation from the Naval Academy, Captain Becker remained there for the summer course in aviation, after which he served from September 1922 until March 1924 as Radio Officer of USS Texas. From March 10 until June 9 of the same year, he trained at the Naval Academy for a place on the US Fencing Team, for participation in the Olympic Games of 1924.

Captain Becker reported in June 1924 to  USS Rappahannock and following two months’ service aboard, was assigned duty as Communication and Issuing Officer, on the staff of Commander, Base Force, USS Procyon, Flagship. He served in that capacity until detached on May 12, 1927, when he was ordered to the Postgraduate School, Annapolis, for the course in Radio and Communication Engineering. Continuing the course at Yale University, New Haven, Connecticut, he received the degree of Master of Science on June 19, 1929.

Following an inspection-educational tour of the East Coast from June 24 to August 3, 1927, Captain Becker served until June 1932 as Radio Officer of USS New York. He returned to shore duty as District Communication Officer of the Ninth Naval District, Great Lakes, Illinois, where he also had charge of Training and Instruction Naval Communication Reserves from June 1932 until September 1934. During that period he prepared a Navy Mathematical History of Radio for exhibition in the Hall of Science, Century of Progress Exposition, Chicago, Illinois, in 1933.

Captain Becker served in Radio and Sound Division, and later Design Division, of the Bureau of Engineering (combined in June 1940 with the Bureau of Construction and Repair and redesignated Bureau of Ships) until late in May 1941. He was then ordered to sea duty as Navigator, later Executive Officer, of USS Augusta, and served in that assignment throughout 1941 and until detached in August 1942.

Returning to the United States, Captain Becker had temporary duty at Headquarters, First Naval District, Boston, Massachusetts, and in the Bureau of Ships, Navy Department, until November 4, 1942 when he reported Headquarters, Fourteenth Naval District, Pearl Harbor, TH, for duty as Radio Material Officer of that District, until February 1945. During that period he served as Officer-in-Charge of the Communications Planning Group on Guam from October 22, 1944, to February 1, 1945, and for meritorious achievement in that assignment he was awarded the Bronze Star Medal with the following citations:

“For meritorious achievement as Officer-in-Charge of the Communications Planning Group on Guam from October 22, 1944, to February 1, 1945. Displaying outstanding ability and initiative, Captain Becker rendered skillful service in the planning, expeditious installation and rapid expansion of the communication system of Guam, thereby contributing materially to the war effort in the Pacific. His devotion to duty throughout was in keeping with the highest traditions of the United States Naval Service.”

After brief duty in the Bureau of Ships, Captain Becker reported in June 1945 to the Navy Yard, Mare Island, California, for duty as Radio Material Officer, with additional duty as Officer-in-Charge of the Naval Training School, Electronics, at the Yard. Ordered back to the Navy Department in February 1948, he became Assistant chief of the Bureau of Ships for Electronics.