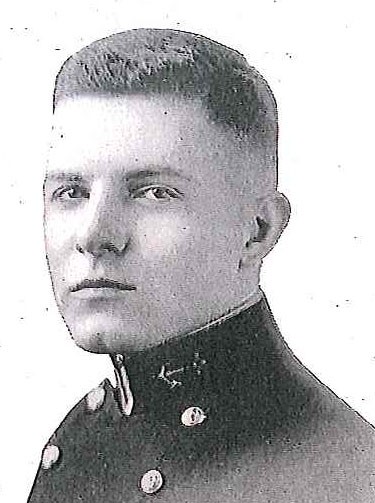 Rear Admiral Dierdorff was born at the old Rose Farm near Hillsboro, Oregon, January 14, 1896, the eldest son of the Reverend William H. Dierdorff and Emma Ross Dierdorff. His paternal grandfather, Captain William H. Dierdorff, and great-uncle, Captain J.C. Ainsworth, had come to Oregon from the Mississippi in the early ‘50s to pioneer in steamboating on the Columbia and its tributaries. His maternal grandfather, the Reverend George Ross, migrated to Oregon from Scotland in 1871 and was for many years pastor of the Tualatin Plains Scotch Presbyterian Church near Hillsboro.

After graduating from Portland Academy and attending Reed College and Pacific University, Rear Admiral Dierdorff was appointed to the Third District of Oregon in June 1915, graduated with the Class of 1919 in June 1918 and was promoted through various grades, attaining the rank of Captain to date from June 18, 1942. He was transferred to the Retired List of the Navy and advanced to the rank of Rear Admiral, effective June 30, 1949, on the basis of combat citations.

As a Midshipman in USS Nevada he served during the first summer of World War I. Following graduation he served briefly in USS Louisiana and then joined the destroyer Shaw of the famous Queenstown Patrol. On October 9, 1918, the Shaw’s steering gear jammed while she and other destroyers were escorting the troop-laden HMS Aquitania at high speed through the danger zone about forty miles southwest of Portland, England. As a result the Shaw was cut completely in two by the Aquitania just forward of the bridge and set on fire with the loss of two officers and ten men. Despite this the crippled destroyer made port under her own power. For his conduct on this occasion, Captain Dierdorff was awarded a Letter of Commendation by the Secretary of the Navy, citing as one of the reasons therefor the following:

“Ensign Ross A. Dierdorff, US Navy, when USS Duncan came alongside to take off the crew, assisted in getting the men over the rails as the ships rolled together and was pulled aboard the Duncan himself as he had understood the order had been for all hands to abandon ship. When aboard the Duncan, seeing that it was apparent a few officers and men were to standby the Shaw, he watched his chance and gallantly jumped back again to the Shaw, where his services were of great value in saving the ship.”

He was subsequently awarded the Navy Cross for heroic conduct in USS Shaw disaster.

“For extraordinary heroism on the occasion of the collision between USS Shaw and the HMS Aquitania on October 9, 1918, when the Shaw was cut in two and set on fire. Lieutenant (jg) Dierdorff, of the Shaw with other officers and enlisted men, threw overboard a large quantity of four-inch ammunition which was on deck only a few feet from a blazing oil-tank, and this while ammunition near then was already exploding. This heroic action saved the ship from complete destruction and made it possible for her to proceed to port under her own steam, in spite of the loss of her bow.”

Remaining with the Shaw while she was rebuilt at Portsmouth, England, Rear Admiral Dierdorff left her at New York 1919, serving thereafter consecutively in the New York, Chauncey, Yarnall, and Jason on the Pacific and Asiatic Stations until the summer of 1923 when he reported to Postgraduate School, Annapolis, for postgraduate instruction in mechanical engineering. Continuing his studies at Columbia University, New York, he received the degree of Master of Science from that institution in 1925.

From October 1925 until November 1928, he was engineer officer of the submarine tender Camden, flagship of the Control Force in Atlantic waters. He was Assistant Inspector of Machinery at the New York Shipbuilding Company, Camden, New Jersey, from November 1928 until September 1930, inspecting the Salt Lake City, Chester and the machinery for the Pensacola. From October 1930 until November 1932, he was Assistant Squadron Engineer of Destroyer Squadron Six (later Four), Battle Fleet and then joined the destroyer Trever as Executive Officer and Navigator. Detached from her in May 1933 shortly before she was awarded the Squadron Excellence Trophy for that competition year, he had a two year tour of duty as Assistant Senior Engineering Planning Officer at the Puget Sound Navy Yard.

On June 10, 1935, he started a thirty month tour in command of the destroyer Lawrence operating chiefly in the Pacific. From December 1937 until April 1940 he was on Intelligence duty, Eleventh Naval District, San Diego. In May 1940, he commissioned USS William Ward Burrows-Ex-Grace Line Santa Rita-at Norfolk, Virginia, for service in construction of the Pacific Naval Air Bases. As described in his article, “Pioneer Party-Wake Island”, in the April 1943, Naval Institute Proceedings, the Burrows spent nineteen days off Wake Island in January 1941, landing a pioneer construction party and equipment through the surf.

Although under orders to the Chester as Executive Officer, Rear Admiral Dierdorff was still in command of the Burrows well along toward Wake Island with three hundred passengers and towing a heavily-laden 1,000 ton steel barge when the news of Pearl Harbor was received. Ordered to return by way of Johnston Island, he delivered the barge safely there on December 15th after bucking the Trados for a week at five and half knots. Anchored south of the island that night when a Japanese cruiser and destroyer shelled it-his four 3-inch guns badly outranged and with passenger list now swolled to four hundred – Captain Dierdorff got underway, hugged closely the extensive but then uncharted Novelty Shoal to the eastward of Johnston and escaped. After determining that Johnston Island required no assistance, he arrived safely at Pearl Harbor on 19 December 1941.

Reporting to the Chester on January 2, 1942, he steamed 55,000 miles in her in the next eight months. In the bombardment Taroa Island, Maleolap Atoll, in the Gilbert-Marshall Raid of February 1, 1942, the Chester was subjected to heavy bombing attacks extending over an hour but fought them off with one bomb hit, eight killed and twenty-five wounded. In the Battle of the Coral Sea, May 4-8, 1942, the Chester shot down five Japanese planes and later took aboard 575 Lexington survivors from the destroyer Hamman. In June her three and half day run from San Diego to Pearl Harbor in an endeavor to join the Battle of Midway narrowly missed accomplishing its purpose.

Detached from the Chester, Rear Admiral Dierdorff reported at New York on September 13, 1942, commissioned the attack transport Elizabeth C. Stanton on the 17th and five weeks later was headed for the North African Invasion with 2,200 troops of the 15th Infantry on board. Landing these troops at Fedala, Morocco, November 8-11, 1942, he subsequently commanded the Stanton an the Task Units which landed the Regimental Combat Teams in the assault landings at Gela, Sicily (July 10-12, 1943) and Salerno Bay, Italy (September 9-10, 1943) respectively. For these services he received the Legion of Merit and a Gold Star in lieu of a Second Legion of Merit – each with Combat “V” – in accordance with the following citations:

“For exceptionally meritorious conduct in the performance of outstanding services to the Government of the United States as Commander of a Naval Task Group and also as Commanding Officer of a US Naval Transport during the amphibious assault on Sicily, July 10, 1943. By his sound judgment in planning and courageous leadership under fire, Captain Dierdorff, in command of a Task Group consisting of transports and a number of smaller craft, was instrumental in landing and establishing a reinforced combat team on shore in the face of desperate enemy resistance. His thorough indoctrination of the forces under his command and his relentless determination, contributed materially to our successful invasion of the islands.”

“For exceptionally meritorious conduct in the performance of outstanding services to the Government of the United States as Commander of a Task Group Unit and Commanding Officer of USS Elizabeth C. Stanton during the amphibious invasion of Italy. With superb skill and sound judgment, Captain Dierdorff, by his direction of the training, planning and exemplary performance under fire, enabled the embarked troops, vehicles and equipment of the Task Unit to be landed promptly and expeditiously on the heavily defended assault beaches. Throughout a critical period of persistent and vigorous hostile bombing attacks, he gallantly fought his ship, accomplished his mission and withdrew his unit with minimum casualties to personnel. His inspiring leadership and conscientious devotion to duty were in keeping with the highest traditions of the United States Naval Service.”

On February 18, 1944, he took command of Transport Division 99 and from April to July 1944 was Commander, Transports, Eighth Amphibious Force in the Mediterranean, For his services as Commander of a Transport Task Group in the invasion of Southern France August 15, 1944, he was awarded a Gold Star with Combat “V’ in lieu of a Third Legion of Merit in accordance with the following citation:

Gold Star in lieu of the Third Legion of Merit:

“For exceptionally meritorious conduct in the performance of outstanding services to the Government of the United States as commander of a Transport Division and Commander of a Beach Assault Group during the the amphibious invasion of Southern France in August 1944. An expert seaman and leader, thoroughly experienced in amphibious warfare, Captain Dierdorff lead an assault convoy from mounting ports in safe passage to the designated area of operations landing troops, their equipment and supplies expeditiously and with marked skill and thereby assisting our ground forces in the rapid extension of their beachhead. Upon completion of unloading activities, the ships under his capable command sailed promptly to base ports for reloading and, by their efficiency in achieving these missions, contributed to the effective build-up movement fo the Allied Armies in Southern France.”

For his services in the liberation of France, he was also awarded the Croix de Guerre with Silver Star by the French Government and for having been mentioned in a dispatch for distinguished service, was awarded a Bronze Oak Leaf Emblem and Certificate of Appreciation by Great Britain.

In December 1944 he reported for duty in the Logistics Plans Division, Office of the Chief of Naval Operations, Navy Department, Washington, DC. He later became Assistant Chief of Logistic Plans and served as such until late in 1947, when he was ordered to duty as Public Relations Officer of the Eleventh Naval District, San Diego, California. In February 1949 he was transferred to duty in the Twelfth Naval District, San Francisco, to await his retirement, effective June 30, 1949.

In addition to the Navy Cross, the Legion of Merit with two Gold Stars and combat “V’s”, the Croix de Guerre with Silver Star (France), the Bronze Oak Leaf Emblem (Great Britain) and a Letter of Commendation from the Secretary of the Navy, Rear Admiral Dierdorff has the Victory Medal, World War I with Destroyer Clasp, (USS Shaw); American Defense Service Medal, Fleet Clasp (USS William Ward Burrows); the Asiatic-Pacific Campaign Medal with two battle stars; American Campaign Medal; the European-African-Middle East Campaign Medal with four battle stars and the World War II Victory Medal. Since 1928 he has held an Unlimited License as Chief Chief Engineer of Ocean Steam Vessels and, since 1936, as Master of Steam and Motor Vessels.